Today is the 75th birthday of Damien Broderick. Broderick has written some of my favorite short fiction over the past decade -- scientifically provocative, fun stories, in a variety of voices. (He's also a first rate novelist and writer of non-fiction.)

Here's a selection of my Locus reviews of Damien's short fiction over the past decade. While I'm here, I'd also like to recommend a particular favorite novella of mine, "The Ballad of Bowsprit Bear's Stead", first published in the Ursula K. Le Guin/Virginia Kidd anthology Edges in 1980, and reprinted by us at Lightspeed a few years ago, and also in Damien's collection Uncle Bones. I include my review of that story at SF Site below as well.

I'd also like to mention my recent review in Black Gate of Damien's updated version of John Brunner's 1950s novel Threshold of Eternity.

Damien Broderick returns to short fiction with “Uncle Bones”, a YA-flavored zombie tale – and pure science fiction. Jim lives with his mother and his uncle, but his uncle is dead – and reanimated by nanotechnology: lucky enough – for certain values of “lucky” – to get an experimental and not wholly successful treatment – side effects include a terrible smell and flaky skin and worse. Jim knows another “Stinky” – the sister of one of his friends. He’s not sure what to think about the whole thing, but when it seems his Uncle might be involved in something shady, he tries to find out what’s going on … with unfortunate results. It’s an enjoyable story, if just a bit predictable and perhaps too convenient in its resolution.

Damien Broderick’s “This Wind Blowing, and This Tide”, from the April-May Asimov’s, is a beautiful story about Sam Park, come to Titan to investigate a mysterious spaceship – complete with lizardlike pilot and flowers. A variety of theories are in play, mostly involving aliens, but Sam believes this ship was sent by intelligent dinosaurs, a theory that invites contempt from the mainstream scientists, contempt perhaps further fueled by his advocacy of paranormal powers – something reluctantly accepted by the scientists who witness teleportation and telepresence used in the investigation. This speculation, tied with discussions of the Fermi Paradox, is fascinating, but the heart of the story is Sam’s own character: a single father mourning his dead son (as signaled by the perfect title, taken from Rudyard Kipling’s “My Boy Jack”, a poem lamenting his son’s death in the Great War).

At Asimov’s for August I was again very impressed by a Damien Broderick story. “The Qualia Engine” tells of a group of children whose parents were genetically engineered, way back in the 1950s, for enhanced intelligence. The children have inherited much of that intelligence (but not all: regression to the norm). The narrator, Saul, is close friends for life with three of his fellows. His “hard problem” is the nature of human emotions, and he works on the title “engine”, which will allow people to directly experience others’ emotions. But, as he reflects on his own life, his own feelings, the eventual success of the project is a two-edged sword indeed. The story is sharply told, very funny at times, and ultimately very powerful.

Tor.com keeps publishing interesting work. .. Damien Broderick offers a story that appeals to nostalgia in a different way. “The Ruined Queen of Harvest World” explicitly invokes Cordwainer Smith in a tale of uplifted cats looking for freedom, and of a glorious romance between a science fictionally plausible Harvest goddess figure and a dead man (sort of). It’s fun stuff, but just a bit too arch, and it makes a good try but doesn’t quite succeed in echoing Smith’s “incantatory” style.

From my review of Uncle Bones (collection) at SF Site

The best two stories are those from the 1980s. "The Ballad of Bowsprit Bear's Stead" appeared in 1980 in Ursula K. Le Guin and Virginia Kidd's original anthology Edges. (Le Guin is not thought of as an anthologist, but she and Kidd edited two impressive books around that time: Edges and Interfaces.) This is a bravura performance, spectacularly written and stuffed with SFnal ideas. The title character is an historian from the future, and an Ainu, sent back in time to observe the fall of the "Old Galactics," an empire of Neanderthals. It's often provocative -- incest is a major theme, for instance, and so is personal hygiene, and so is genocide. (Neither the Ainu depicted here nor the Neanderthals have attitudes much in sympathy with 21st Century Western attitudes.) As I mentioned, the writing is arresting, often quite funny (as with the depiction of the Emperor's robots, modelled on Karl Marx and Adam Smith), sometimes punny, sometimes bawdy. I think it rather a discovery.

In the February Asimov's I also enjoyed Damien Broderick’s “Dead Air”. Broderick’s recent stories have been riffing on past masters of SF, such as Roger Zelazny and Cordwainer Smith, and here he takes on Philip Dick, with a pretty much pitch perfect pastiche, in a story that slyly also confronts some ideas of a less well-remembered SF writer, as it talks of “thetans” taking over people’s TV sets to deliver messages. And behind the wacky furniture lurks a sad story of a divorced man and his lost children.

There is a lot more to like in the Spring issue of Subterranean – but my favorite story is by Damien Broderick. “Under the Moons of Venus” is another of his stories that riffs on a famous SF writer’s work – but Broderick makes the story entirely his own. The title seems to reflect Burroughs, and the last line echoes yet another famous writer, but the story really is in conversation with a third (who I won’t mention, though I think it will be clear enough to readers). Blackett lives, he thinks, on a nearly deserted Earth. He, along with much of humankind, was briefly on an alien-altered Venus, but he has been returned. He hopes to go back to Venus, and tries to find a way; while his psychiatrist tries to convince him he’s delusional. There’s also a talking dog, and an obese Turkish bibliophile. It is not clear to this reader whether Blackett or his psychiatrist has the right of it, and it doesn’t matter. It’s a very well written story, profoundly evocative, and whatever your interpretation of events, deeply moving.

Damien Broderick’s sudden resurgence over the past three years or so has been simply a wonder. (Not that Broderick was not already a noticeably excellent writer, but he had never been all that prolific, especially at shorter lengths.) “The Beancounter’s Cat” (Eclipse 4) tells of Bonida, a humble woman – a beancounter – who suddenly acquires a talking cat. The woman lives in Regio City on a curious world perched under the “Skydark”, near the ancient “Skyfallen Heights”. There are cantrips for cleaning, and an Absent Goddess, Lalune, but it’s clear enough that this is a far future with Clarkean technology indistinguishable from magic. The story revolves around Bonida’s dead mother’s true nature, and Bonida’s destiny, which may be humanity’s. The themes are typical of Broderick, one of our prophets of the posthuman, and the telling, in a rather arch, formal, style, is lovely, and the SFnal mysteries are worthy of revealing – and revealed nicely. 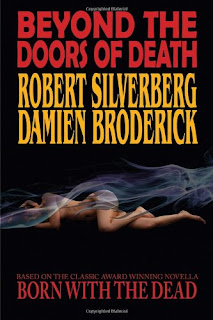 One of the interesting features of SF is the sometimes open collaboration of writers, one extending another's ideas. Robert Silverberg has enthusiastically participated in this sort of collaboration, for example extending Isaac Asimov's 1941 classic “Nightfall” to a full-length novel in 1990. Now he gets the same treatment, as Damien Broderick has written a long novella, “Quicken”, beginning more or less at the end of Silverberg's 1974 classic “Born With the Dead”. The two stories are published together as Beyond the Doors of Death. “Quicken” is a fully successful sequel, not betraying the original at all but recognizably Broderick's vision. (Indeed, at the beginning I thought of Silverberg, but by the end Van Vogt was in my mind.) “Quicken” is like “Born With the Dead” told from the POV of Jorge Klein, whose wife Sybille has been “rekindled” after her too early death. In the first story Klein was disappointed by Sybille's indifference – the dead are cold, above all (and Silverberg's prose perfectly captured this coldness). Now, in Broderick's story, Klein too has been rekindled, and he is similarly “cold”. But he finds himself recruited to be an ambassador from the Deads to the “Warms”, in an increasingly dangerous world where the still living resent the rekindled. The story begins a a slow pace, introducing Klein to his new state, but then begins to leap forward, into a future riven by war between the quick and the dead (if you'll pardon me), and then still forward, by century and millennium, to a somewhat transcendent resolution. I doubt this is what Silverberg had in mind with his original, but Broderick's take is consistent nonetheless, and quite fascinating.

The big novella this March-April Asimov's is plenty of fun, a wild kind of superscientific ride. This is “Tao Zero”, by Damien Broderick. Shipton Dow is the son of Robin Dow and Robyn Dow, who were brilliant young teenagers when he was conceived. They also were lottery winners, and they used their winnings to start an industry devoted to learning how to manipulate the Way (the Tao), and to further understand the nature of intelligence. As a similarly precocious young teenager, he is at MIT when he begins to fall for another brilliant teenager, Felicity. Then suddenly an attack on the MIT campus puts Ship in great danger, and he is saved by a mysterious entity who whisks him away through a tesseract … and Felicity too is swept up into this action, along with her grandfather and eventually Ship’s parents, not to mention Ship’s AI companion, Bandaid. This is wacky stuff, told in short sections headed by quotations from the Tao Te Ching, clever, often funny, kind of sweet, kind of convoluted. In the end in a curious way I thought it a bit small-scale relative to the really grand implications of the super science described – though I’m not sure that’s a weakness or a reflection of the nature of the Tao.