Birthday Review: Take a Girl Like You, by Kingsley Amis

Birthday Review: Take a Girl Like You, by Kingsley Amis

Kingsley Amis was born 16 April 1922. He was one of the great comic novelists of the 20th Century, and also a long-time proponent of SF (and a writer of a number of SF novels and short stories.) In his memory, here's a review I wrote some time ago of one of his best novels. 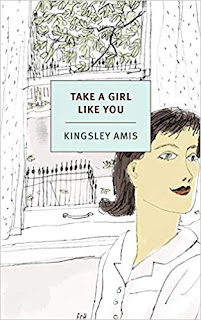 Kingsley Amis opened his career with the novel that remained his most famous work to the end of his life: Lucky Jim. His next two novels were generally regarded as disappointments, at least relative to Lucky Jim. It is with his fourth novel, Take a Girl Like You, that Amis again hit his stride. This is as with almost all of Amis's works a comic novel, but much darker than Lucky Jim, with a cad for a leading man and a rather sad (morally) ending. (Spoilers will follow, but none that I think would interfere with a reader's enjoyment.)

The protagonist is Jenny Bunn, a 20 year old girl from the North of England who has come to a middle class town near London to be a schoolteacher. Jenny is an extremely beautiful woman, a bit naive, and brought up with fairly conventional notions of sexual morality. Which have been a bit of a burden to her since about the age of 14, when she noticed that all of a sudden she was constantly the object of not always welcome male attention.

Soon enough at her somewhat depressing boarding house she meets a very charming and handsome man named Patrick Standish. Patrick is breaking up with her fellow boarder, a somewhat ramshackle Frenchwoman named Anna Le Page. Patrick immediately notices Jenny, the way all men seem to, and not long after he has asked her on a date. Which is quite a lot of fun, until Patrick closes the evening by rather insistently trying to seduce her.

Patrick is a schoolteacher himself, at a private school for boys, and apparently rather good at his job. He has the same problems with his bosses that every Amis leading man seems to have: his headmaster is pleasant enough but ineffectual, and another teacher is a very nasty piece of work. But we slowly gather that Patrick is far from blameless: most egregiously, he is not trying very hard to resist the head's 16-year-old daughter's pathetic attempts to sleep with him. He also cruelly torments the clumsier and stupider people around him.

The novel portrays Patrick's courtship of Jenny, over roughly a year's period. This includes attempts to persuade her that her moral views are outdated, a long period of trying to be "not a bastard", failed attempts to resist having sex with other women he encounters while away from Jenny (the dates are a good thing, see, to prove to himself he really loves Jenny ... but he still has sex with the women) ... and finally an ultimatum to Jenny to sleep with him or end the relationship. When Jenny wavers, he breaks it off, then rapes her after she gets drunk. (It's what we now call date rape -- possibly at the time it would not have been regarded as rape, quite, though in no way does Amis seem to approve.) At the end Jenny is resigned that she will stick with Patrick -- she likes him too much, and she has no virginity left to protect. This is all rather dispiriting, though quite true to her character I think. As it happens, this is the only novel to which Amis wrote a sequel: Difficulties With Girls, a couple of decades later, in which Jenny and Patrick are married, but Patrick is still philandering. That book ends a bit happier, with Jenny gaining the ultimate upper hand in their relationship.

I think this is an excellent novel. The various characters are thoroughly believable to me, and a varied and odd lot. Amis's comic eye for dialogue, and internal dialogue, is sharp as ever. The novel is funny when it needs to be, and honest and sad when it needs to be.
Posted by Rich Horton at 7:52 PM