Carol Emshwiller died two months ago, just short of her 98th birthday, which would have come today. She is one of the key, yet underrated, figures in SF over the last several decades. (Underrated because she was not terribly prolific, and because so much of her work was short fiction, as well as because she had a very individual voice.) I wrote about her short fiction at the time of her death, here: In Memoriam, Carol Emshwiller. So, today, on her birthday, here's my rather brief review from back in 2006 or so of her novel Mister Boots. 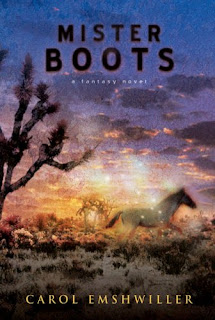 Mister Boots is a YA novel from Carol Emshwiller, published in 2005. Emshwiller's late in life flowering continues to be one of the remarkable stories of recent SF. (Not that she hasn't been a brilliant writer from the late 50s -- but she has never been so prolific as in the last few years, and she is as good or better a writer as she has ever been, even in her 80s.)

This book is about a girl named Bobby Lassiter, who has just turned 10 as we meet her. She is living in the California desert with her mother and her 20 year old sister. The depression is just around the corner, but this family knows poverty just fine -- they barely scrape by on the proceeds of the older women's knitting. The father, who was evidently terribly abusive (physically -- whippings of all three -- not sexually) left them when Bobby was very young. Bobby (full name Roberta) is apparently called Bobby because the father wanted a boy -- and, indeed, no one but her sister and mother knows she's a girl.

She meets a man on their property one night, who tells her he is really a horse, named Mister Boots. He too has been abused by his human owners. Bobby feeds and clothes him, and eventually takes him home. Events follow quickly from their. The mother dies. Mister Boots and the older girl, Jocelyn, fall in love. Their father, Robert Lassiter, returns and the abuse begins again. He wants Bobby to become a magician, just like him -- and she finds she is good at that, and wants to do it. They head to LA (Bobby dressed as a boy -- which her father still thinks she is), and become a successful magic act, despite Mister Boots's refusal to turn into a horse onstage. Bobby makes her first ever friendship with a girl her age: a similarly bereft Mexican girl named Rosie whom she meets in a sort of hobo camp. They meet their father's long time mistress -- or is she really his wife, and are they illegitimate? But then the Depression hits, and the money dries up, and things get worse and worse, until a final revelation and a final horrible act.

It's a charming and hopeful story in one sense, with a delightful narrator in Bobby. (Yet a real seeming narrator -- not a prodigy, for instance, and far from a perfect person.) Yet it is also quite dark -- the depression, the abuse, and a somewhat tragic denouement. Which I think means it's really pretty much like real life. A very fine little novel.
Posted by Rich Horton at 7:23 AM