Today is Jim C. Hines' birthday. And in his honor, here's a short review I did for my previous blog some time ago, of his novel The Stepsister Scheme. (I reviewed its sequel, The Mermaid's Madness, at Fantasy Magazine, as well.) 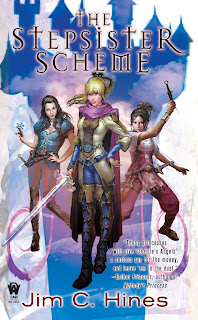 Jim C. Hines's The Stepsister Scheme is the first in his new series concerning the adventures of Cinderella, Snow White, and Sleeping Beauty. The lead character is Cinderella -- Danielle Whiteshore -- who is adjusting to her new "happily-ever-after". She really is in love with her Prince (which turns out not to be the case for Snow White or Sleeping Beauty), and is pretty content, when all of a sudden one of her stepsisters shows up and tries to assassinate her. Her stepsister, the prettier and stupider of the pair, has learned some magic, but with the help of a handmaid who turns out to be Talia, also known as Sleeping Beauty, and also with the help of Danielle's animal friends, the assassination attempt fails. But her stepsister gets away.

Danielle quickly learns that her mother-in-law has secretly taken in Snow White and Talia (aka Sleeping Beauty) after the two fled intolerable home situations. (Snow White is wanted for the murder (in self-defense of course) of her evil stepmother -- her "Prince" turned out to be no help, and her true lover was the huntsman who saved her life. Talia, on the other hand, resents the fairies who gave her the gifts -- and the curse -- and she hates the "Prince" who wakened her by raping her while she slept and making her pregnant -- she only woke because of the pain of childbirth.) The two young women act as spies for the Queen. Snow White is magical adept, and Talia a martial arts adept. Now, it seems, Danielle's husband, the Prince, has been kidnapped by Cinderella's stepsisters and taken to Faerytown. The three young women go on a mission, where their three complementary talents (Snow's magic, Talia's weapons skills, and Danielle's ability to talk to animals, plus her innate niceness) all combine to, after much difficulty, uncover the nature of the stepsisters' plot, and the nature of their allies.

On the surface it seems it might be a romp. And there are aspects of the romp to it -- a fair amount of light jokes, some fun playing with the details of the "true stories" behind the fairy tales. But there's a lot of serious intent, and dark details, behind everything, as the details I mention above about the true stories of Snow White and Sleeping Beauty might indicate. The characters of the three princesses are well-portrayed, and each is quite different to the others. The plot involves real pain, some moral ambiguity, and a less than easy resolution. But it's never dreary -- it's a fun and adventure-filled story to read. Good work. I'm reading the second one, The Mermaid's Madness, now -- which adds the Little Mermaid to the mix. (Presumably the third book, Red Hood's Revenge, will bring in Little Red Riding Hood.)