Today is Dan Simmons' birthday. In his honor, then, I'm reposting this review that I had posted at SFF Net and on my now defunct website back in 2004. 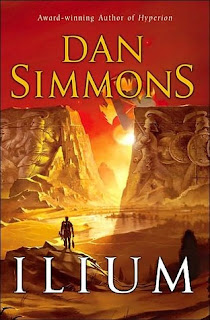 Dan Simmons' Ilium is, as of this writing, a nominee for the 2004 Hugo for Best Novel. It's a long novel at some 240,000 words. It comes well-recommended, with mostly quite good reviews in addition to the award nomination. I had hesitated to read it, partly because of the length and partly because the most common capsule description -- "the Iliad reenacted on Mars in the far future" -- just didn't seem all that appealing. It turns out, as I might have expected, that that description is not really very good applied to the entire book. And as for the length, it's notable that it is very similar in size to the combined books of Scott Westerfeld's diptych Succession, but it was published as one book for $27.95, while Westerfeld's books were published as two books for $23.95 per. (To be sure, Ilium is itself only the first book of a diptych!)

Having finally read Ilium, I was pretty pleased. It's full of SFnal imaginative brio (if not always very plausible), and it's also full of pretty absorbing action. My main complaints are a) that it's only the first half of its story (though it does come to at least a somewhat satisfying stopping point -- similar in a way to that of Westerfeld's The Risen Empire but I think more successful as a book conclusion); and b) that so far it doesn't seem to be about much -- it's fun and has lots of interesting ideas but it seems somewhat slight.

The story is told on three main threads. The most prominent centers on Thomas Hockenberry, a 20th century college professor who specialized in Homer. He has been mysteriously resurrected in this far future, and he is one of a number of "scholics" employed by the gods (yes, Zeus, Aphrodite, etc.) to observe the progress of the Trojan War, which is being fought (reenacted? refought for real? fought for the first time somehow? who knows?) on what seems to be Mars. (The gods, of course, live on Mt. Olympos -- that is to say, the great volcano Olympus Mons.) The scholics keep track of how closely the war tracks Homer's poem, which turns out to be pretty closely. But the gods' arbitrary violence, and a general despair at the bloody-mindedness of everyone, drive Hockenberry to rebellion -- at first just a night with Helen (!), but soon a plot against the gods themselves.

Meanwhile, the AIs called moravecs who live in the Jupiter system have detected unsettling activity on Mars, and they send an expedition. One member of this expedition is Mahnmut, who lives on Europa and drives a submersible exploring the Europan seas. He is also an expert on Shakespeare's sonnets. His best friend is Orphu of Io, a Proust enthusiast. The two are marooned on Mars when the expedition comes to disaster, and they head for Olympus Mons on their own to try to complete the mission.

And finally, in Earth, Daeman is a foolish young man living in the rather stale society of the few remaining humans on the planet after the long past exodus of the "posthumans" to Earth orbit. The Earth humans live lives of idle eroticism and sloth, unable to read, unaware of geography as they "fax" (i.e. teleport) everywhere, served by robotic "servitors" and the alien Voynix. Every 20 years they are "faxed" to orbit and repaired, but they live only five "Twenties". Daeman visits a beautiful young woman named Ada in hopes of seducing her, and finds himself all unwilling drawn into the schemes of Ada, her friend Hannah, an ancient Jewish woman named Savi, and a 99 year old man named Harman who wants to avoid extinction when he reaches his fifth "twenty". This group ends up wandering the Earth: Antarctica, Israel, the dry Mediterranean Basin, in hopes of finding a way to the home of the posthumans in orbit.

Which is pretty much it for this book. Which isn't to say that nothing is resolved -- lots happens, and there is a lot of change. There are bloody battles, rampaging Allosauruses, some weird technology, aliens, gods of various sorts, heroism, sex, disasters. It's lots of fun, and the scene is well set for what could be a pretty exciting concluding volume. [But perhaps it says something -- though more about me maybe than the book, to be fair -- that I never got around to reading the sequel, Olympos.]
Posted by Rich Horton at 5:48 AM