Today  is the anniversary of the birth of Peter O'Donnell (1920-2010), author of the Modesty Blaise comics and novels. Here's a review of one of his Modesty Blaise books. I also reviewed his romance novel Stormswift, written as by "Madeleine Brent", some while ago.

I read a Modesty Blaise novel by Peter O'Donnell several years ago, indeed I think it was the first novel (though I understand the whole series began as a comic strip): Modesty Blaise.  I enjoyed it, but hadn't encountered another one.  Last fall at Archon Glen Cook had some used editions, so I bought a copy of Sabre Tooth, which seems to be early in the series.  I just now read it. 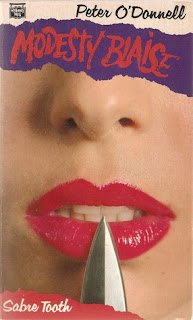 The books are fairly clearly written to fit the James Bond spy thriller genre, with the key difference that the hero is a woman, Modesty Blaise.  Also unlike Bond, she's a former criminal, and she's only unofficially attached to British intelligence.   But such aspects of the series as love of neat gadgets, sex, and a certain romantic view of intelligence work, especially British intelligence work, definitely recall the Ian Fleming books.

Modesty's backstory is that as a child (she was perhaps born in Greece) she was orphaned and forced to walk thousands of miles to survive, along the way encountering hunger and rape and learning to rely totally on herself.  While still a teen she founded an international crime organization called "The Network", and later she rescued a brilliant criminal from a Thai jail, Willie Garvin, and brought him back to psychological health.  At the time of the books, Modesty is somewhere in her late 20s, and Willie a few years older. They have retired from crime with a fortune.  They remain a dedicated two-person team, and Modesty loves Willie, while Willie worships Modesty (whom he calls Princess).  In neither case is the love sexual at all, however.  Both are brilliant athletes and martial artists, Modesty is the better with firearms, Willie with knives, Modesty the better schemer, Willie the genius tinkerer.  Though they are portrayed very well, they are clearly "superheroes", not realistic.  But that's OK.

The other main recurring character seems to be Sir Gerald Tarrant, an obscure British bureaucrat who actually heads a certain branch of UK intelligence.  Tarrant is able to get Modesty and Willie to assist him, partly by being a friend, and honest, and partly by offering challenging work. In this book a mercenary team is being assembled in a remote valley in the Hindu Kush.  The team is run by a merciless leader called Karz, and we are introduced to several of his conscience-deprived deputies, most notably a pair of Siamese Twins, called "The Twins", who are formidable fighters as a team, but who hate each other when they are not fighting.  (This too echoes Fleming: the mastermind with his brutal henchman).  Tarrant gets wind of a possible plot to take over Kuwait, to loot the oil money.  He doesn't know who's doing it, but he does notice that a lot of well-known mercenaries have disappeared, so he assumes they are being assembled into an army.  He intuits that the army will need leaders, who are very rare, so he manages to convince Modesty and Willie to feign a desire to get back into the "business", as their capabilities are so well-known that they will surely be approached. They do so, but they miscalculate the types of persuasion Karz will be able to use on them, and they find themselves in a situation where they have a terrible choice: they may have to actually go through with Karz' plans.

It's terrifically exciting stuff.  Thoroughly unrealistic, in character, technology, and in the over-the-top villainy and pride of the bad guys which of course contributes to their ultimate failure. (I hope no one thinks that a spoiler!)  But that's all part of the genre -- and this is a wonderful example of the genre.  I was gripped from the start, and there are numerous delightful scenes, and some real tension.

(One thing I noticed was how much time O'Donnell spent describing clothes, especially Modesty's.  This is something eluki bes shahar was discussing a couple of years ago, in relationship to romance fiction. Spy stories are supposed to focus on gadgets (and this does that too), but the clothes description was striking to me.)
Posted by Rich Horton at 8:34 PM