Don Webb has a birthday today. He's written a lot of neat short fantasy and horror over the years. His only novels (that I know of) are a set of Texas-based mysteries, with slight and ambiguous fantastical elements, that were published around the turn of the millennium by St. Martin's Press. I really liked those books, but alas, there have been no more. Here's what I wrote about the third of those books when it first came out: 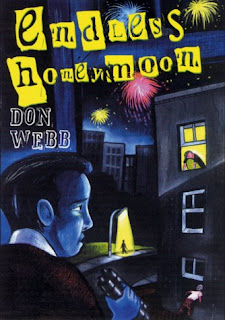 Endless Honeymoon is the third in a recent series of Texas-based mysteries by the engagingly odd writer Don Webb.  I say series, but the books are very loosely linked, sharing mostly some Texas settings, and occasionally featuring major characters from another book as minor characters. I like all three books a lot.  This latest book, after The Double and Essential Saltes, is even more loosely linked, as the protagonists of the other two books were brothers. The lead male characters are all likeable, somewhat nerdy, and very uxorious.  The subject matter is always a bit off-center, and quite different from book to book, but computers are always central to the books.  And you can count on a mention of fireworks.  (It's not certain that this book is in exactly the same timeline as the other two: a murdered character from a previous book appears here alive, and it seems to be set later, though who knows for sure.)

This book is about a couple named Willis and Virginia Spencer. They are independently wealthy (Virginia inherited money, and Willis made a bundle as a Y2K expert), and they spend much of their time performing rather cruel pranks.  Their victims are people whom they have discovered who are "psychic vampires", or simply "shits", who delight in causing misery to those around them, and Willis and Virginia hope to teach these folks a lesson.  They choose their victims by means of a computer program Willis found during his Y2K work.  It turns out, however, that the program was written by a man who takes the whole thing a bit more seriously: he murders the "psychic vampires" instead of simply scaring them.  And one day, unluckily, Willis and Virginia choose the same victim that the "Shit Killer", as he is called, has chosen.

Before long, several people are on the track of the couple. One is the agent the FBI has assigned to the "Shit Killer" case, a young Hispanic man named William Mondragon. This case has the reputation of driving FBI agents crazy, and indeed the previous agent on the case, Abel Salazar, has quit the FBI and is working for someone else, also looking for the killer, and he tracks down both Mondragon and the Spencers.  Add the "Shit Killer" himself, who may be looking for a successor to carry on his work, and the mysterious person behind Salazar, and the Spencers are in big trouble.  Before long Virginia has been kidnapped and Willis and Mondragon are on a wild chase after both her and the real killer.  The resolution is quite scary, involving several people who are both insane and evil, and dealing with Virginia's past abuse by both her father and her first husband, with the "Shit Killer"'s wasted life, and with a strange psychiatrist.

The story is full of imaginative action, and it's fast moving and exciting. Webb does not shy away from the moral implications of all his character's actions, and from the unfortunate attractiveness of the "Shit Killer"'s agenda.  Willis and Virginia are flawed and likeable, and even the villains, mostly, are real (if very strange) people, and not wholly villainous.  (The only exception is clearly completely insane.)
Posted by Rich Horton at 5:28 PM