Old Bestsellers: The Story of Doctor Dolittle, by Hugh Lofting 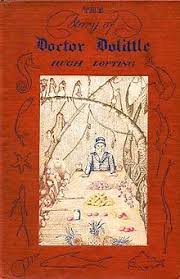 The first chapter book I ever owned was The Story of Doctor Dolittle, which my mother bought for me from some sort of children's book club in the late 1960s -- I assume I was 8 or 9. I loved it, and went straight to the library (Nichols Library (the REAL Nichols Library, not the bloodless replacement that you'll find there now) in Naperville, IL) to find the others. I read each of the books at least a dozen times, to the point that it was a (gentle) joke of my mother's, when I'd come back from the library with another Doctor Dolittle book (plus others, of course -- Danny Dunn, or Narnia, or Cowboy Sam, or whatever.) There were about a dozen books in all, the last three or so posthumous compilations of shorter pieces.

Hugh Lofting was born in 1886. The genesis of the Doctor Dolittle books was letters he wrote to his children from the trenches of World War I. He was injured in the War, and after it was over he and his family moved to Connecticut. The first book, the one at hand, The Story of Doctor Dolittle, was published in the US in 1920 -- it didn't appear in the UK until 1924. I never knew this -- I always assumed Lofting was purely English -- the books are so very English in tone. The second book in publication order (though I read them in internal chronology) was The Voyages of Doctor Dolittle, published in 1922. It won the Newbery Medal. It is, in my opinion (as of 1970 or so!) by far the best of the books. Lofting died in 1947.

There have been two prominent movies based on Doctor Dolittle -- the 1967 Rex Harrison feature, and the 1998 Eddie Murphy feature. The latter spawned three sequels (of which the last couple were direct-to-video.) Another movie, unrelated to these, is planned for release in 2020. None of the movies are terribly faithful to the books, though the Harrison movie does use some incidents from a few of the books, notably The Voyages of Doctor Dolittle and Doctor Dolittle in the Moon.

There is, of course, an elephant in the room regarding the Doctor Dolittle books, and that is their racist elements. And let's not paper that over -- they are real, and worst are pretty shocking. The most racist stuff is in fact in the first book, in particular a scene in which a black prince asks Doctor Dolittle to turn him white so he will be attractive to the woman he's entranced by (in fact, Sleeping Beauty.) The interesting thing is that that scene was completely (and somewhat clumsily) deleted from the edition I first read. I didn't know that until a couple years later when I checked the book out of the library in order to look at the original illustrations. 10 or 12 year old Rich Horton was, I assure you, no particular paragon of wokeness (I was a typical child of an affluent suburb in which opposition to racism was a given, but actual knowledge of real black people was pretty slim -- there was one black kid in my high school, for instance.) Even so, I was shocked even then reading those scenes, and for one of the very few times in my life I found myself approving censorship. The later books are much better to my eyes (others may disagree) -- the black characters are portrayed somewhat stereotypically (as are pretty much all the characters, if we're honest), but they are given more agency and are regarded sympathetically. Since the late 1980s, editions of the Doctor Dolittle books have been revised, alas sometimes clumsily, to attempt to remove the questionable elements. I still think the books are enjoyable, but I'd have to say tread carefully.

My impetus to reread the book was a book sale in my town, given by the owner of a fine local used 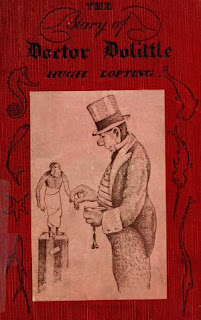 book store which I have patronized for decades, The Book House. They just lost the lease on half their shop, so they need to reduce stock a lot. The owner lives in my town (her daughter was in grade school with my kids), and she had a sale out of (I assume) her house -- and I found a rather battered copy of the 49th impression (from, I'd guess, the 1950s.) It includes the same Hugh Walpole introduction, originally for the Tenth Edition, that was also in the book club edition I had as a child. The illustrations are by Lofting himself.

So what happens in The Story of Doctor Dolittle? John Dolittle is a physician in a small English village, Puddleby-on-the-Marsh. He lives with his sister, but over time his financial incompetence, and his love of animals (so that many live in his house) cause his practice to founder. But he learns how to speak to the animals, and soon is a renowned veterinarian (renowned among animals, at least.) Before long his household consists primarily of a monkey, Chee-Chee; a dog, Jip; an owl, Too-Too; a duck, Dab-Dab; and a pig, Gub-Gub. Plus of course the sarcastic parrot Polynesia. Chee-Chee reports that his relatives in Africa have reported a terrible plague among the African monkeys, so Doctor Dolittle proposes to sail to Africa to try to cure them.

In Africa they encounter the King of the Jolliginki (whose son is the Prince mentioned above.) He distrusts white men because they have stolen his gold (he had a point, I thought), so he imprisons the Doctor, but Polynesia schemes to get him out. He escaped Jolliginki and reaches the land of the monkeys, and effects a cure. And then it's time to return to England.

The journey home is mainly menaced by the Barbary Pirates. But the help of a bunch of birds, plus the cleverness of Jip, allows them to escape and indeed rescue a boy and his uncle, who had been taken by the pirates. And then -- back home.

This story shows its origin -- as a series of letters -- and its author's inexperience. It's episodic, illogical, often silly. But of course it has its charming aspects. Still, reading it at 59 I didn't recapture the magic of 50 years ago. But I'm not the audience any more. That said, The Story of Doctor Dolittle was never my favorite of the books -- I have some hope that the later books retain the charm I so loved back then. But I'm not sure when I'll get a chance to read them.
Posted by Rich Horton at 6:20 PM