Today is Naomi Kritzer's birthday. She began publishing fiction about when I began at Locus, and she's been doing strong work all along, but obviously she got particular notice with the 2016 Hugo winner for Best Short Story, "Cat Pictures, Please". And she's on the current Hugo shortlist for Best Novelette with a very fine story, "The Thing About Ghost Stories". Here's a compilation of my Locus reviews of her short fiction:

The October Realms of Fantasy features no less than 3 stories in fairy tale mode. Two are retellings of familiar fairy tales as science fiction. Naomi Kritzer's "In the Witch's Garden" is based on "The Snow Queen". The children, real and "made", of an enclave of scientists are conditioned never to leave lest the Snow Queen find them. The title witch finds one such "made" girl after she escapes, and wishing a daughter of her own, kidnaps her. But her new "daughter" remembers eventually that she was looking for a friend of hers who had also escaped, and she leaves on a journey to find this boy. What she finds instead, inevitably, is a "conceptual breakthrough" (to use Peter Nicholls' term) about the nature of their world. The reader will likely have guessed most of what is going on well in advance, but the story still satisfies.

The webzine Strange Horizons has a reputation as a slipstream-oriented site, but it opens 2004 with 3 fairly pure science fiction stories ... Naomi Kritzer's novelette "St. Ailbe's Hall" (1/19-1/26) considers the question of whether enhanced animals (dogs in this case) have souls and can be accepted into the Catholic Church. It's a worthwhile and longstanding SFnal theme, and her story (told through the eyes of a priest) is involving and moving, but I wasn't quite convinced by the societal background to her story, and by the reactions of the general populace.

Baen’s Universe tends to have a science-fiction bias, but it was the fantasy stories that I preferred this February. Naomi Kritzer’s “The Good Son” is a familiar story from one point of view – a faery falls for a human woman and comes to our world to seduce her. But what makes it special is not his courtship of his lover – rather, it is the relationship he is forced into with an older couple he tricks into serving as his parents in order to make his backstory more convincing. An original and quite moving slant on an old story.

“Solidarity” (F&SF, March-April), another of Naomi Kritzer's stories of life in a purported Libertarian Utopia, which as the title rather strongly signals, suggests that economic forces can create something nearly indistinguishable from slavery even in (or perhaps especially in) a society ostensibly based on individual freedom. (I find these stories (which seem well on their way to forming a novel) engaging and entertaining but perhaps pushing a bit too hard to make their point – less sneering villains, for one thing, would to my mind lead to a more powerful ultimate message.) In this story, Beck has been kicked out by her father for helping expose the nasty labor situation on New Minerva, and while on her own she learns of a plot to disrupt the funeral of the labor leader, Miguel, who was featured in the previous story.

The January Clarkesworld is #100 ... I really liked a very funny short story by Naomi Kritzer, “Cat Pictures, Please”, about an emergent AI that decides it has to do good for people, though it must be paid, in cat pictures of course. The three cases it takes on are interesting themselves, and the AI's reactions are priceless – I laughed aloud in public.

In Clarkesworld's November issue “So Much Cooking”, is a fine, affecting, story by Naomi Kritzer about an epidemic of bird flu, told in the form of several entries from a cooking blog, as the blogger reports on how hard it is to cook when a city is quarantined and as you keep taking in more children who need a place to stay.

Clarkesworld’s March issue has three consecutive stories that issue that struck me in a similar way. These stories use sure-enough science fiction ideas (not just furniture) in the pursuit of low key character exploration – and indeed, all wander to not terribly dramatic conclusions. And I liked them all – “Waiting Out the End of the World in Patty’s Place Café”, by Naomi Kritzer, is set in a café in South Dakota, where the narrator is marooned while trying to get home to reconcile with her parents before an asteroid hits the Earth (or misses, depending on luck). She meets a friendly couple, who understand her, it seems, a lot better than her parents, who broke with her over her sexuality. Again, the question isn’t about the end of the world – it’s about the narrator’s modest choice. And it’s nicely, if a bit patly, handled.

Uncanny’s May-June issue is further proof that it stands with any of our field’s zines: always interesting, and usually justifying the “uncanny” name. ... Even better, I think, in its short space, is “Paradox”, by Naomi Kritzer, which is told by a time traveler (or travelers?) in a series of paragraphs, explaining what’s up with the timeline(s), and why it’s so hard to get things right. 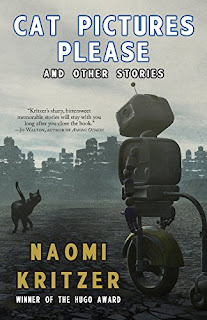 Speaking of Naomi Kritzer, I should mention her first collection, Cat Pictures Please and Other Stories. The title story won a Hugo, and there are numerous other excellent stories here (I particularly like “Scrap Dragon” and “So Much Cooking”), and also two new pieces, of which my favorite is “Ace of Spades”, about a journalist in China, reporting on an Iraq-like war in which the US is using remotely-operated robots. The geopolitics don’t convince (China isn’t Iraq, and that matters), but the personal story of Natalie and her father and her reasons for being there really does work.

In Uncanny’s year-end issue I liked Naomi Kritzer’s “The Thing About Ghost Stories”, which tells affectingly of a woman, a folklorist who is an expert on ghost stories, and her relationship with her mother, who has Alzheimer’s, both before and after her mother’s death.
Posted by Rich Horton at 5:13 PM