Today is Steven Silver's birthday. Last year I did a special Birthday Review at Black Gate of his most recent story; so this year I'll turn to an anthology he edited. My review originally appeared in my column in the UK magazine 3SF. 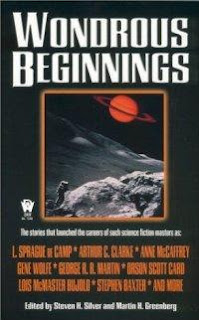 Wondrous Beginnings is the first of a set of three anthologies edited by Steven H. Silver* and Martin H. Greenberg. Each book includes the first story from a well-known writer in our field. This book focuses on Science Fiction, while Magical Beginnings focuses on Fantasy, and Horrible Beginnings on Horror. An especially nice feature is the introductions, often quite long, contributed by the authors, usually giving interesting details of their early career.

Silver and Greenberg have chosen an impressive temporal range of authors for the Science Fiction volume. The earliest is Murray Leinster, whose first SF story, "The Runaway Skyscraper", appeared in 1919. The latest is Julie E. Czerneda, whose "First Contact, Inc." appeared in 1997. Writers who debuted in each decade from the 1930s through 1980s are also included.

The stories are of varying quality, as you might expect. Not often is a writer's first sale an enduring classic. Probably only Orson Scott Card's "Ender's Game" (the short version of his famous novel) would qualify from this book. That isn't to say that the stories are bad, however. Most of these pieces are at least enjoyable. The stories as a group make for a decent anthology, but the added value of the introductions makes this a truly worthwhile purchase. It's also interesting to see for which writers the first story is characteristic of their work. Hal Clement's "Proof", with its exotic aliens and its pro-scientific attitude, and Catherine Asaro's romantic "Dance in Blue" both clearly presage, in theme and in style, their authors' future work. But Barry N. Malzberg's gimmicky though amusing "We're Coming Through the Window", and Howard Waldrop's "Lunchbox", a tale of Martians meeting the Viking lander that sold to Analog of all places, are decidedly off those authors' usual track.


*The H is actually not an initial, it's Steven's full middle name, but DAW apparently didn't know that and added the period. (My grandfather used to say that his middle name was just V, but actually he had a true middle name, Velt (after Theodore Roosevelt, who was President when he was born, but he hated that name.))
Posted by Rich Horton at 5:55 PM