Today would have been Terry Pratchett's 71st birthday, but he died, not yet 67, in 2015. In his memory, then, here's a repost of something short I wrote a while ago on my SFF Net newsgroup. 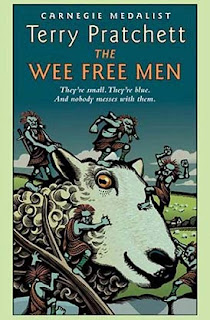 I've read a few of Terry Pratchett's Discworld novels with general enjoyment -- but they have left me wondering for the most part exactly why they are so very popular. (Doubtless in part, as I have been assured, because I haven't read the right ones.) Put simply, to me they have seemed nice comic novels with some worthwhile gentle satire -- but by no means masterpieces. Now I have read what I think is my favorite Discworld book so far -- and perhaps not surprisingly it is not part of the main sequence. This is The Wee Free Men, the first of Pratchett's Tiffany Aching sequence of nominally Young Adult Discworld books.

Tiffany is a nine year old girl living in on the Chalk. She is part of a sheepherding family. She has older siblings and a very annoying younger brother, Wentworth. One day she is playing by the river when she encounters a bunch of tiny (six inches tall or so) blue men -- and a monster. She uses Wentworth as bait for the monster -- rather shocking, that, using her little brother that way -- but quite successful as well, for she is able to send the beast packing.

She thereby attracts the attention of Miss Tick, a witch. Miss Tick cannot practice magic on the Chalk, but she decides that Tiffany must be a witch -- and perhaps one who can practice magic. This is important because another world is impinging dangerously on this one (evidently Discworld, though one of the different features of this particular Discworld book is that really it could have been set just as well in our world, looked at a bit slant). It will be up to Tiffany to deal with this impingement. Luckily, she has the help of the little men she saw -- the Nac Mac Feegle, or Wee Free Men. Luckily too she has the memories of her Granny Aching, who must also have been a witch -- mustn't she? Even if all the magic she did seems to have had a sensible explanation. ("It's still magic if you know how it's done.")

And so Tiffany and the Nac Mac Feegle will find their way to the realm of the Faerie Queen -- or "Quin" as the Wee Free Men would have it. And a combination of Tiffany's resourcefulness and growing understanding with the Wee Free Men's vigor and absurd bravery will (of course) save the day. I liked the book a great deal. Tiffany is a wonderful character -- so too is her Granny. The Wee Free Men are hilariously portrayed. Little bits like the most horrible menace the Queen can find to face the Wee Free Men are just plain funny. And the story is sensible and humane as well. Not moralistic but essentially moral without being a lesson. There are at least a couple more Tiffany Aching books, which I will have to scare up.
Posted by Rich Horton at 4:09 PM