Michael Dirda recently reviewed this book in the Washington Post and I thought "that book looks like it would be right up my alley!" So I bought a copy and read it -- and Michael was right.

Alfred Edward Woodley Mason lived from 1865 to 1948. He was at time an actor, a playwright, and even a Member of Parliament, of the Liberal Party. But his major success was as a novelist. His best known novel by far was the novel at hand, The Four Feathers, from 1902, which was filmed multiple times, most successfully in 1939 by Zoltan Korda, starring John Clements and Ralph Richardson. He was also known for several detective novels about Inspector Gabriel Hanaud of the Surete, created as a reaction to Sherlock Holmes and said to be an inspiration behind Agatha Christie's Hercule Poirot. 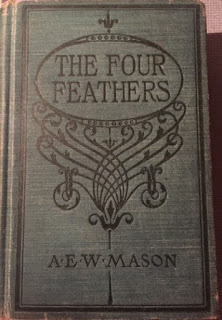 My copy of The Four Feathers is a 1905 edition from Macmillan. It is inscribed inside by Dorothy A. Kern, of Chicago, presumably the first owner. A note on the first page states that the main character first appeared in a short story published in the Illustrated London News.

Harry Feversham is a sensitive 14 year old when we first meet him, the only child of the widowed General Feversham. He is allowed to stay up with the General and a few of his army friends on their annual meeting on the anniversary of a critical battle. He hears tales of courage and cowardice, and the General's crippled friend Lieutenant Sutch (who, it is suggested, had an unrequited passion for Harry's dead mother) notes the fear that Harry shows at the tales of cowardice and the sad outcomes of the cowards. Harry, Sutch fears, is too intelligent and too imaginative, unlike his rather dull father. But there is no alternative -- all the Fevershams have been military men, and so must Harry be as well.

The action jumps forward 13 years, to 1882. Harry has been in the Army for some time, and he is having dinner with his fellow officers Trench, Willoughby, and Durrance. He announces his engagement to an Irish woman, Ethne Eustace. This caused Durrance some pain, for he is also in love with Ethne. Then Harry receives a telegram, and throws it in the fire. Soon thereafter, he resigns his commission. It becomes clear to Trench, Willoughby, and to Castleton, who sent the telegram, which indicated their regiment was to be called to active duty, that Harry has resigned his commission for fear of the danger of active duty. So they each send him a white feather, symbol of cowardice. And, shortly thereafter, Harry confesses as much to Ethne, and in a passion, she tears a feather from her fan and gives it to him as well, the fourth feather, and their engagement is broken.

Much of the rest of the story is told via Durrance. On duty in Egypt and the Sudan, he follows the careers of his fellow officers, and each encounters terrible dangers. One crisis is the loss of some letters from General Gordon that had been hidden in a town overrun by rebels. Miraculously, these letters are recovered. Durrance realizes that the strange man who effected the recovery was none other than Harry Feversham. At about that time, a strange accident striked Durrance blind, and he is forced to return to England, invalided out of the service. There he again strikes up a relationship of sorts with Ethne, while his curious friend, the widow Mrs. Adair, who it is immediately clear is hopelessly in love with Durrance, is also involved. Durrance hopes to marry Ethne -- but is it fair that she marry a blind man? Only if she truly loves him. And, of course, he is honest enough to realize eventually that she still loves Harry. Meanwhile, Harry is in North Africa -- having discovered that another man who sent him a feather is imprisoned in a hellhole, and having decided to get himself sent to the same prison, and to effect his former friend's release. It is clear that his hope is to redeem each of the four feathers -- only so that he will be worthy of Ethne's respect (not love) when again they meet in the afterlife.

And so things go -- a curious love quadrilateral of sorts between Harry, Durrance, Ethne, and the tortured Mrs. Adair. Acts of desperate heroism in North Africa. The kind intervention of Lietenant Sutch. Durrance's struggles with life as a blind man. Ethne's music. It's all highly pitched romanticism, insisting on a thorough obsession with honor -- but not revenge. It's not really quite believable, of course, but it's fun and involving. Not a great novel, but an enjoyable novel, and well written as well. Dirda was right.