Charles Kingsley (1819-1875) was a clergyman in the Church of England and a novelist. He was a Christian Socialist, prominent in his opposition to, for example, child labor, but terribly inconsistent, in particular as he was quite noticeably racist, particularly as concerns Jews, Catholics, and the Irish, but also lots of other people. These general attitudes of course were not uncommon in those days, but Kingsley appears to me to have held them a bit more virulently than some. He was an early supporter of Charles Darwin and his theory of evolution, but to my eye (based on The Water-Babies alone), his ideas about evolution seem a bit simple-minded. Besides The Water-Babies his most famous novel is Westward Ho!, which I passed on as it seemed terribly sad on a quick skim. Shallow of me, I guess.

I'd been meaning to try The Water-Babies for quite a while. It was once an extremely popular children's book, but it has largely faded from notice in recent decades. I found a copy recently at an estate sale, and figured now was the time. My edition probably dates to the 1930s. The book was first serialized in Macmillan's in 1962/1863, and published in book form in 1863. My edition is inscribed "A Happy Birthday to Betty and much love from Benjamin Edwards. May 16-1934. Baghdad." It was published by Thomas Nelson, now well known as an American publisher of most religious material, but back then a more generally focussed English publisher. It is copiously illustrated by Anne Anderson. Anderson (1874-1952) was a Scottish illustrator, mostly of children's books. 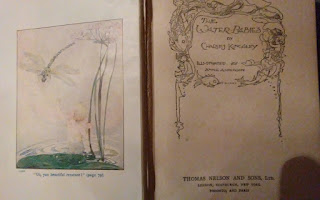 The Water-Babies concerns the lives of Tom, who when we first meet him is a chimney sweep in the North Country of England. His master, Grimes, is a cruel man and a drunkard, and Tom can think of little but when he will become a master sweep and be able to treat his apprentices as cruelly as Grimes has treated him. One day Grimes gets as assignment to clean the chimneys of Sir John Harthover, an honorable and highly respected local judge. On the way they meet a mysterious Irishwoman, who objects to Grimes' treatment of Tom, and who tells them "Those that wish to be clean, clean they will be; and those that wish to be foul, foul they will be."

At Harthover Place, Tom manages to get lost in the maze on chimneys, and he ends up coming down into the fireplace of the daughter of the house, Ellie, who is about his age. He is supposed to be a thief, and he is chased out the window and runs away in a panic, making his way across the moors ot a secluded village, where he is treated kindly by a local schoolmarm, but ends up falling in the river and being transformed into a tiny "water baby". Soon after Sir John, having realized that Tom was innocent, organizes a search, and finds the husk of his body, so that he is presumed dead. (Not too long after that, Ellie also dies in a fall, and is herself transformed to a water baby.)

Tom's career as a water baby proceeds -- at first he makes friends with fish and water insects and so on, though he is also often cruel. All along, without his realizing it, fairies are helping him. Eventually he proceeds down river to the sea, and has further adventures and travels, making his way at last to St. Brandan's Isle, where the fairies Mrs. Doasyouwouldbedoneby and Bedonebyasyoudid try to show him a way to be a better person. He meets Ellie there as well, and learns that she goes to someplace special on Sundays. Eventually he is set a task -- to do something he doesn't want to do, and help someone he doesn't like -- and another quest ensues, ending up with him becoming worthy of Ellie, and both becoming human again, and (it seems, though the book denies this in a joking fashion (only princes and princesses get married in fairy tales)) getting married, while Tom becomes an engineer. It's not clear what their identities are in this new incarnation.

I've skipped over the bulk of the book, really, which is amusing descriptions of the lives of various water creatures and birds and so on, along with a number of, essentially, Just So stories. These are often fun, but they are also moralizing to a fault, and twee rather beyond a fault. This isn't a bad book, and I can see the appeal it must have had, but it didn't really work for me, and I can see why it has become largely forgotten.
Posted by Rich Horton at 7:34 PM