This review first appeared in Tangent, issue 20/21, in 1998. I'm reposting it mainly because it was not available online any more, but prompted by MacLeod's birthday, August 7. 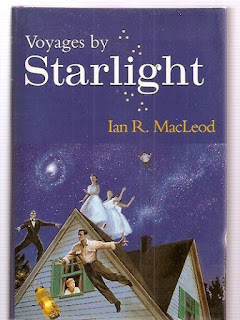 Ian MacLeod seemed to emerge into the SF field almost fully-formed, as it were, with the publication in the Fall 1990 Weird Tales of his second story, "1/72 Scale", which was nominated for a Nebula. His first novel, The Great Wheel, has just been published; and Voyages by Starlight is his first collection.

His stories are very well-constructed, and characteristically rather quiet in tone. In this, in some of his themes, and in his ability to plant a subtle bombshell and explode it in the reader's face at a story's close, he reminds me of the excellent mainstream writer William Trevor. SF writers he reminds me of include Christopher Priest, M. John Harrison, and perhaps his fellow Ian, McDonald. MacLeod uses SFnal tropes, sometimes quite original ones, primarily as metaphors enhancing the story's themes, or as enabling devices to place his characters in revealing situations.

I've read all these stories in their original magazine publications, and MacLeod has established himself with me as a "must-read" writer. But rereading them in bulk in this collection enhances my sense of his virtues. His prose style is balanced and elegant. He is wonderful at evoking landscapes, either beautiful as in "The Perfect Stranger" and "Starship Day", or grotesque, as in "The Giving Mouth". His characters are closely described, and truly alive.

My favorite stories here are "The Perfect Stranger" and "Starship Day", which resemble each other a bit in setting (sun-drenched island), and in following a man in early middle age whose marriage is failing, in both cases partly because of guilt about a child. Otherwise the stories are wholly different. "The Perfect Stranger" opens with the protagonist meeting his wife at a lovely vacation island. The catch is, everyone's memories are erased at the start of the vacation, so they don't know each other. Idyllic scenes of the couple in love on the island are alternated with scenes of their harried life prior to the vacation, and our knowledge that their marriage was on the rocks prior to the vacation fills us with foreboding for their future once their memories return. Is it possible to start over again, and not make the same mistakes? (A question MacLeod considers elsewhere as well.) And at what cost came this vacation?

"The news was everywhere. It was in our dreams, it was on TV. Tonight the travelers on the first starship from Earth would awaken." So opens "Starship Day", as the lovely island town of Danous awaits the news from the starship. Owen, the narrator, is a psychiatrist, and rather cynical in his view of the news. He's more concerned with his failing marriage, and his failing relationship with his mistress, and his failure to cure a despondent patient. We follow him through a gorgeous day, and a sumptuous "starship party", until the transmission from the ship is revealed. A final twist gives the whole setting and story a sharply drawn meaning. A wonderful story.

Most of the rest of the stories are nearly as good. "Grownups", last in the book and longest, is set in what appears at a glance to be contemporary England. But soon odd differences are revealed: humans are of three sexes: men, women, and "Uncles", who live apart, and who appear to be the childbearers. In addition, adolescents "grow up" by a sudden, painful, physical transformation: thus there is a very sharp demarcation between "grownups" and children. MacLeod examines gender roles (more by exaggerating present-day gender roles) and also, more tellingly, examines the nature of childhood versus adulthood. Bobby, the protagonist, watches his brother "grow up" and get married, later he is pushed by his friend May to try to postpone or avoid "growing up". This is an excellent example of using an overtly SFnal idea to illuminate the mundane human character.

One of the more unusual pieces is "The Giving Mouth". This takes a couple of familiar fantasy storylines (noble son meets peasant girl, Queen orders hopeless quest against invading danger) and plays them out in an inverted, "industrial" fantasy world, full of slagheaps, oil slicks, mechanical but living horses, and a well-depicted atmosphere of brutality and degradation. The resolution is unexpected, and a nice twist on what had seemed a cynical take on "fairy tales".

I'll touch more briefly on the other stories. "Marnie" uses an idea Tiptree used a couple of times, time travel back along one's own thread of consciousness, to explore a man trying to set right his relationship with his lover. It's nice but predictable. "Green" is a very good "alternate fantasy", featuring a gardener for the King in a world where gardens are infested by brownies and fairies as well as ordinary pests. "1/72 Scale" tells of a young boy, whose older brother is dead, who tries to make a complicated airplane model to somehow prove to his parents that he is as worthy of their love as his brother. "Tirkiluk" features a British weather officer on Greenland during World War II. He befriends an outcast Eskimo, then undergoes a mysterious transformation after disaster strikes the weather station. "Papa", set in another of MacLeod's beautiful seaside locations, is a gentle exploration of a very old man, somewhat lost in the suddenly utopian future, missing his long dead wife, unable to connect with his son, and loving but not understanding his grandchildren. Finally, "Ellen O'Hara" (non-SF, as far as I can tell, though it appeared in Asimov's), is a strong story of a Catholic girl in Northern Ireland, who spends her life trying to come to terms with the murder of her pacific father, and finally meets her father's killer, giving her (and us) a bitter and ironic look at her life choices.

This is truly an outstanding collection of stories. If I had a complaint, it would be that they are all familiar to me: I like a collection to feature something new or obscure. (Perhaps one or two of MacLeod's Interzone stories (e.g. "The Family Football") would have been good choices.) But this is mere quibbling: and furthermore, these are stories that reward rereading.