Another review that I'm resurrecting because Ian MacLeod's birthday was yesterday -- but this seems a book that his slipped out of the general consciousness in the years since its publication, and that's just wrong -- it's a really significant book, and I hope it can be rediscovered. (I believe I may have first posted this review at rec.arts.sf.written in 2003.)

Anyway, as it seems in danger of being too soon forgotten, I'm featuring this is this week's Friday's Forgotten Books. 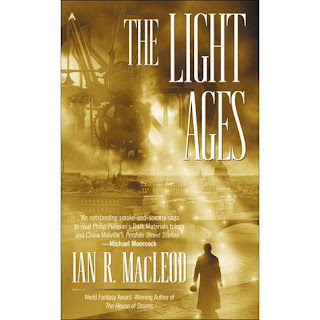 Ian R. MacLeod is one of the finest writers in the SF field, known best for short fiction such as his World Fantasy Award winner "The Summer Lands", "Starship Day", "Breathmoss", "The Chop Girl", and "New Light on the Drake Equation". He is certainly one of my favorite writers. He has published only one previous novel, The Great Wheel, though I am told that a novel-length version of "The Summer Lands" exists.

The Light Ages has the feel of a steampunk novel -- that is, it is set in an England that resembles Victorian (or perhaps Edwardian) England, with magic that resembles rather grungy technology the motivating force in the background of the book. (Though if the book can be dated, it would seem to date to the late 20th Century -- I'm not sure if that is meant to be a comment on the magic and social organization of the world of the book retarding progress, or if rather it is a backhanded comment on our own society, or perhaps it is simply a mistake on my part.)

The book is told by one Robert Borrows. Robert grows up in a Yorkshire mining town. The substance mined at this town is "aether", a magical source of energy that is the driving force of the economy and technology of the world of this book. Accidents with aether can cause people to mutate into "changelings" or "trolls", and Robert's life changes when his mother begins to mutate. One result is a trip to a strange old woman, Mistress Summerton, a changeling herself, who lives with a beguiling ward called Annalise. Another result is, eventually, his mother's suicide. And yet a third result is his association with the Grandmaster of the local Guild, who is performing dangerous experiments on such things as electricity, and who seems perhaps to have been involved in a mysterious incident that may have caused Robert's mother's aether contamination.

Robert eventually escapes his home town and heads to London, where he becomes involved in fomenting a socialist revolution. He becomes a "mart", someone outside the Guild structure of England. The Guilds apparently control all the technology, and all the labour. Robert, thus, makes his living via the black market, or by simply stealing, and he also becomes a writer for a revolutionary newspaper. His focus is the injustices of the Guild structure, but all along we are also showed the maltreatment of the changelings.

In London Robert also again encounters Annalise, now calling herself Anna Winters. She has become attached to the upper classes, particularly via her friendship with Sarah Passington, daughter of perhaps the most powerful man of the realm. Robert's doomed attraction to the strangely glamourous Anna motivates him to continue to visit her when he can. He is both disgusted by the class inequalities revealed to him, and also of course attracted by the perquisites of the very wealthy -- not to mention such beauties as Sarah and Anna. He also again meets Mistress Summerton, as well as further figures from his past, and further changelings -- all slowly adding detail to our understanding of the terribly unjust social structure of this alternate England. Among all this, Robert runs into further hints of the secret behind his mother's accident, which turns out not surprisingly to be central to Annalise's history as well.

The book turns, finally, on revelations about the emptiness behind the aether-based power structure of the rulers of England, and an ambiguously successful "revolution". Robert and Anna learn much about their past -- and they are intimately involved with the opening of a new "Age". But the new Age is perhaps not all they might have hoped.

I had a complex reaction to this novel. It is for much of its length quite frustrating. The pace is glacial. MacLeod conceals important information (what is aether, really? what are changelings? etc.) for what in the end seems little reason. For too long almost nothing really happens. But it remains absorbing for the excellent writing (save a few slips that I think point to less than wonderful copyediting), and for the fascinating details of life in this alternate England. But what really redeems the book is the ending, which I found emotionally wracking, and honest, somewhat surprising, almost but not quite cynical. I was moved to tears -- I think honest tears -- and the final scene is perfect.

It is an ambitious novel. I cannot argue with anyone who gives up because of the pace -- it really is too slow in developing. For me, in the end the payoff was wholly worth it, though. While acknowledging that it could have been even better, I think I still concur with David Kennedy's view (expressed in another review on rec.arts.sf.written) -- "ridiculously good".

My review of his first, quite excellent, story collection, Voyages by Starlight
And a compilation of some of my Locus reviews of his short fiction, plus a longer "SF by Starlight" piece on his great novella "New Light on the Drake Equation": Short Fiction of Ian R. MacLeod
Posted by Rich Horton at 8:25 PM