I'm reposting it today because Robertson Davies was born 105 years ago. 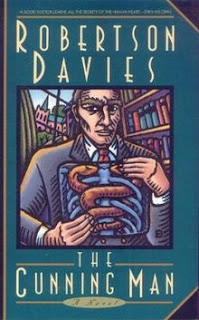 It was already my plan to review this book here, simply because it is the last book I finished, and it is a significant book by one of my favorite authors. However, I learned some very sad news today: Robertson Davies died December 2, so this review will take on a somewhat valedictory tone.

For me personally, the news of Davies` death is quite depressing, doubly so because now two of my three favorite non-SF writers have died within a few weeks of each other. (Kingsley Amis having died in late October.) My third favorite non-SF writer, Anthony Powell, is older than either Davies or Amis (Amis was 73, Davies 82, and I believe today is Powell`s 90th birthday. [Actually, Powell was born on 21 December 1905.])

Oh well, on to the book. Robertson Davies was a Canadian author, arguably the finest Canadian writer ever, who wrote plays and novels on generally Canadian subjects. The novels fit generally into trilogies: The Salterton Trilogy, The Deptford Trilogy, and The Cornish Trilogy, in order of composition, represent his first nine novels. All his novels, however, can be read independently (although at least The Deptford Trilogy probably reads best in order.) To say, as I have said, that his novels are "about Canada" is a laughable understatement, however. I tried to summarize the subjects which Davies covered once for a friend, thinking it would be a tidy list, and I kept going and going: Theatre, Music, Vaudeville, Toronto, Hagiography, Jungian Psychology, Art (particularly "The Old Masters"), aging, medicine, Canadian politics, war, finance, schools (both Canadian "boarding schools" and Universities), and on and on. Suffice it to say that his novels are fascinating, hypnotic, works, usually centered on an artist of some kind. Perhaps the best place to start with Davies is his first two books: Tempest-Tost and Leaven of Malice, as these are somewhat lighter in tone than his later works (though all Davies` work is full of comedy at some level.) In my opinion, his best novels are Fifth Business, the first of The Deptford Trilogy, and What`s Bred in the Bone, second book of The Cornish Trilogy.

I am going on. Pardon me, obviously Davies is an enthusiasm of mine. Anyway, his last two novels (barring a posthumous work) are Murther and Walking Spirits and The Cunning Man, which appear to be the first two parts of another loose trilogy [now generally called the (unfinished) Toronto Trilogy), although both are capable of being read completely independently. The Cunning Man is the story of Jonathan Hullah, a Toronto doctor of somewhat unusual reputation. Hullah narrates the book, and tells his own life story beginning in about 1920 in a very isolated part of Northern Ontario, and continuing through early experiences with the local doctor, and also a Native American healing-woman, boarding school, medical school, World War II, and his postwar establishment of his own rather unusual medical practice, which is treated as a court of last resort for cases other doctors have considered hopeless. The key elements of the book are Hullah`s relationships with various people, in particular his school friends Charlie Iredale and Brocky Gilmartin (the latter the father of the narrator of Murther and Walking Spirits), his English lesbian landladies, called The Ladies, and the community surrounding the Very "High Church" Anglican church of St. Aidan`s, next door to Hullah`s practice. At the heart of the story is the mystery surrounding the death of the pastor of St. Aidan`s, Father Ninian Hobbes, and the attempts of Charlie Iredale, now an Anglican priest and Fr. Hobbes` assistant, to have Hobbes declared a saint.

As usual, the main interest of the book is in the characters, and in the curious subjects which come up as a result of the story: medieval saints tales, Anglican ritual and especially Church music, acting, a somewhat psychosomatic theory of disease, church politics, some Freudian psychology, and a great deal more.

For me, this book ranks in the middle range of Davies' work, which of course still makes it highly recommended. However, my interest flagged at times, and the book failed to completely involve me in the way that Davies' very best books do. Also, the central story is less compelling than in most of Davies` books, so the interest devolves even more to the characters and the somewhat arcane knowledge and theories that Davies discusses. These are interesting indeed, but a real gripping story would be still more interesting.
Posted by Rich Horton at 8:35 PM