Martin Amis turns 69 today. I've read most of his work -- he's been a favorite of mine since I realized that the son of another of my favorite writers (Kingsley Amis) was also a writer. So I'm resurrecting this review of his 2006 novel House of Meetings. 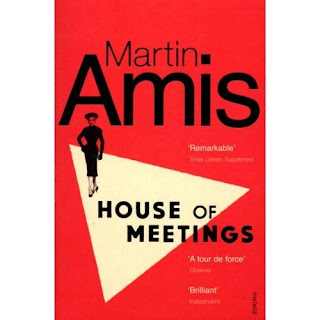 Martin Amis's new novel is House of Meetings. Obviously making use of some of the research associated with his previous non-fiction book, Koba the Dread, which was about Stalin, he has written a novel about a "survivor" of the Gulag. But of course the novel is in great part about the ways in which this man didn't really survive the Gulag.

The narrator is a Russian born in 1919. He is telling his story, in what seems to be a long letter, to his stepdaughter, an American girl, sometime in 2004 or so. In the present he is taking a trip back to the location of the slave labor camp in which he spent ten years from about 1946 to 1956. It becomes clear he intends to die soon, and this narrative is a confessional.

The fulcrum of the story is a love triangle, involving the narrator, his ten years younger brother Lev, and a beautiful young Jewish girl named Zoya. Just after the War (in which the narrator, in his words, raped his way across East Germany -- in company, to be sure, with the rest of the Russian Army), Zoya moved into their neighborhood in Moscow, and immediately established a reputation as a woman of little character. But a very beautiful woman. The narrator, a war hero of sorts, handsome, used to having his way with women, becomes obsessed with her, but is rejected. And ends up being sent away to a labor camp. And he is astonished to learn that his rather ugly younger brother has taken up with Zoya, and indeed married her. But then Lev too is sent to the camps -- the same camp. And the two men spend several years there -- though Lev is a pacifist, and refuses to become involved in fights against the camp bullies, or the administrators. Which leads to something of a rift between the two men -- a rift exacerbated in the narrator's mind by his jealousy. But something changes horrendously when Zoya is allowed to make a conjugal visit -- in the "House of Meetings". And when soon after that, the camp is closed and the inmates freed.

The later life of the three is also described. The narrator is fairly successful, in Russian terms, eventually emigrating to the U.S., while Lev's marriage disintegrates, and he marries another woman, and has a son, destined to die in Afghanistan. But all is leading to a final confrontation between the narrator and Zoya, and to a final revelation in a long buried letter from Lev to the narrator. All this incident is skillfully unfolded, if to be honest the final letter isn't quite the explosion we have been led to expect.

Much of the interest in the novel is in the quite compelling descriptions of life in the labor camp. Besides being a portrayal of slave camp life, and a portrayal of a ruined man, it is to some extent a pained depiction of a dying country. It is very well written. A bit less "bravura" in prosody than earlier Amis books, though still often arresting. And very moving, quite believable, quite profound. One of Martin Amis's best novels, I think.