I admit I had never heard of Colin Watson when I ran across this 1969 mystery novel at an estate sale or antique shop recently, hence the "Perhaps Forgotten" label. But on research (i.e. reading his Wikipedia entry) I see he was quite popular at that time, and that the Flaxborough books even became a TV series. So very possibly he's not forgotten at all.

Colin Watson (1920-1983) wrote 12 novels in the Flaxborough series -- Flaxborough being a provincial town based on Boston, Lincolnshire (where Watson worked as a journalist). He wrote one other novel (The Puritan) as well as a study of thrillers, Snobbery With Violence, that covers such writers as Dornford Yates, whom I have reviewed on this blog. (And, yes, "snobbery with violence" fits Yates very well.) Four of the Flaxborough novels were used in the BBC TV series Murder Most English, in about 1978. (One of these was the novel at hand, The Flaxborough Crab.) There were also BBC radio adaptations of two of the books. 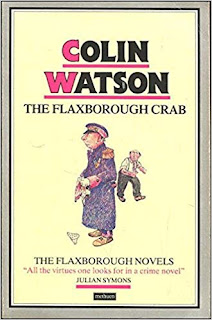 The detective in the books is Inspector Walter Purbright, a rather plodding but honest fellow. Another major character is Miss Lucinda Teatime, who seems rather a conwoman, but, as a recurring character, is evidently never the true villain. She's "of a certain age", but seems concerned with her appearance and sexual availability, even though she doesn't actively engage in such activities in the book at hand -- and she's quite clever and intriguing if, well, also intriguing, in another sense.

The book opens with several scenes of women being attacked by an older man, and groped. (One of the older men portrayed, by the way, is called Mr. Grope, I am sure not unintentionally, though he isn't the villain.) The curious aspect of all this is the strange scuttling crablike way the attacker runs. So Purbright sets up a patrol, trying to catch the perp, with no results, However, a senior citizens outing, organized by Alderman Winge, leads to a shocking conclusion -- Winge tries to grope one of the women, and in making his crablike escape, falls off a cliff into the river and dies.

So -- problem solved, eh? But the inquest suggests the possible involvement of an herbal product, "Samson's Salad", which is supposed to, er, increase the vitality of older men. (This is pre-Viagra days, of course.) And Samson's Salad, Purbright learns, is sold by an outfit run by Miss Lucinda Teatime. That's not all, though -- there are competing doctors testifying at the inquest, and it appears there's another potential product involved, much more respectable, produced by a German company. Could one of these drugs/herbs be causing the unsavory activities of the Flaxborough Crab? And is there more than one Crab?

You've probably guessed the solution, in broad terms. In narrower terms, there's another death (there always is -- these detectives are terribly inefficient, always at least one more person needs to die for them to solve the case), and it's suspicious enough to lead to further investigation and the revelation of a rather involved murder method.

The whole mystery aspect of this novel is really kind of minor, and the actual murder method seems implausibly involved. But the fun is the wicked satiric portrayals of all the characters, good, bad, and merely crazy. It's nothing overwhelmingly special, but it's pretty fun, all things considered. Not a great book, but I suspect the Flaxborough Novels, as a class, will all pass the time amusingly.
Posted by Rich Horton at 6:40 PM