Signs of Life, by Cherry Wilder

Cherry Wilder was the name used for her SF by Cherry Barbara Grimm (1930-2002). Grimm was born in New Zealand, and died in New Zealand, but spent much of her adult life first in Australia, then in Germany. She was a very interesting writer at her best, though she didn't ever quite get wide recognition. That said, her YA Torin series, beginning with The Luck of Brin's Five, was fairly popular. I thought her late short stories, in places like Interzone and in some of Jack Dann's Australian/New Zealand themed anthologies, as well as the short and brilliant "Aotearoa" in Asimov's just before her death, were quite impressive.

Today would have been her 88th birthday, so I am resurrecting a fairly brief review I did of Signs of Life for my SFF.net newsgroup way back then. 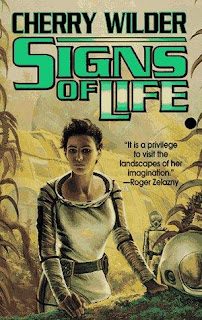 Signs of Life appeared in 1996. (Another novel with the same title came out in 1997 from M. John Harrison. Totally different novel, quite excellent.) Wilder's novel is a sequel to her 1982 novel Second Nature. It's pretty good.  It tells the story of a starship which crashlands on an Earthlike world.  The thing is, another starship had crashlanded there a couple of centuries earlier, and the world has been "colonized" by descendants of the original crashees.  (This is the story told in Second Nature.)

The two main strands of the story follow the efforts of the complement of one of the Capems (sort of lifeboats) to survive in the first few weeks after landing, and the crew of a sailing ship which happens to be visiting the island on which the Capem has crashed.  This allows Wilder to compare and contrast, a bit, the new society of Rhomary (the name of this planet) with the Earth/Arkady folk of the newly crashed starship.  The viewpoint characters are very likable, and very human (even the androids, or Oxpers (auxiliary persons: Wilder has a very engaging way with neologisms)).  The only villain is rather stereotypical, and a little hard to believe: Wilder postulates that the only military-style organization to survive in the future is the maintenance crews of starships, and the leader of the maintenance crew which happens to come down in Capem Five, the focus Capem, rather predictably becomes a militaristic paranoiac (I hope I'm not misusing this word) under the stress of the crash.

I really did enjoy the novel. It's involving and engaging. The plot is a little vague, little more than a narration of events for the first month or so after crash.  There is closure, it's just that the plot doesn't have much structure.  As I intimated, the villain is somewhat overdrawn.  There were a couple of implausibilities, mainly the near complete lack of language difficulty between the Rhomary colonists and the starship folk.  Wilder throws in some gratuitous (to me) telepathy, but to be fair, this seems to be part and parcel of her "future history". I recall being vaguely disappointed that it didn't come out in 1997, so that I could have added it to my Hugo Nomination ballot along with Harrison's novel (as a kind of joke, of course). (That was a year that I didn't read any of the actual Hugo nominees until much much later -- I think I had only read seven 1997 novels by the time of the nominations, and probably only Harrison's would have been a truly deserving nominee.)
Posted by Rich Horton at 7:45 AM