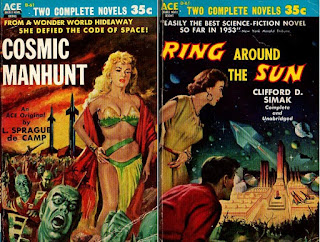 This early Ace Double stands as one of the better pairings in the series' history. Both authors are SFWA Grand Masters. Both books are fine work, and very characteristic of the author. Neither story is quite a classic, and as such the book stands just shy of the very best Doubles (a couple of suggestions for the best: Conan the Conqueror/The Sword of Rhiannon; and, if one allows a "recombination", the late repackaging of The Dragon Masters and The Last Castle).

Ring Around the Sun is a Complete and Unabridged reprint of a 1953 Simon and Schuster hardcover, which was serialized beginning in December 1952 in Galaxy. It is about 75,000 words (one of the longest Ace Double halves). Cosmic Manhunt is called an "Ace Original", but it is a very lightly revised reprinting if De Camp's 1949 Astounding serial "The Queen of Zamba". It is about 50,000 words long.

Clifford Simak's first SF stories were more or less standard (but well regarded) pre-Campbell pulp adventures -- Isaac Asimov liked his first, "World of the Red Sun", enough to retell it aloud to his elementary school friends. (Asimov later wrote a harshly critical letter to Astounding about one of Simak's first stories for John Campbell, and Simak replied asking for advice on how to improve. Asimov abashedly reread the story and decided he was wrong and Simak was right.) He stopped writing for several years in the 30s, only to be lured back by John Campbell. Simak, with Williamson, Leinster, and a few others, was able to make the transition from 30s pulp to the more serious science fiction Campbell wanted. Simak made his biggest impression over the next decade with the series of stories that became his fixup novel City, which won the International Fantasy Award in 1953. He published two of the earlier Galaxy serials: "Time Quarry" (book title: Time and Again), which appeared in the first three issues of Galaxy (October through November 1950) and Ring Around the Sun. (He also had a novel published as a "Galaxy Novel" in 1951: Empire, a very little known book, by all accounts little known for good reason.)

Ring Around the Sun is an intriguing effort that I don't think quite comes off. The hero is Jay Vickers, a writer living in upstate New York. He lives alone, with apparently just one friend, a tastefully named old man named Horton Flanders. His agent is a lovely woman named Ann Carter, but her evident interest in him is hopeless: Jay can't forget his love for Kathleen Preston, a rich neighbor girl in his home town (presumably located in Southwestern Wisconsin, where Simak routinely set stories) who was sent away by her parents to keep her from poverty-stricken Jay's attention. Jay feels different in other ways: there is the memory of an enchanted valley he visited with Kathleen, and of a strange place he went to as a boy, by the agency of an old top.

Jay is called to New York to meet with a man who wants him to write an exposé of some new products that have been showing up. These are things like a razor blade that never wears out, a light bulb that never burns out, and, most radically, a car that will run forever: the Forever car. George Crawford represents an industry group that is afraid of the effect of these products on the world's economy, and he wants Jay to write articles about the danger. But Jay distrusts Crawford and refuses. Then his friend Horton Flanders disappears, and suddenly people seem suspicious of Jay himself. And of anyone involved with the Forever car and the other new products. It seems that there are "supermen" among us, and that Jay may be one of those who doesn't recognize his talents. Jay escapes a potential lynching and heads for his hometown to try to unravel the mysteries of his birth and upbringing, and of the enchanted valley he once visited.

The story gets a little stranger from there. It seems that there are not just supermen but androids involved. And parallel worlds -- possibly available for colonization. And messages from the stars. And multiple copies of the same individual. Horton Flanders is in on the whole thing. George Crawford's industry group is engaged in fomenting a war if that's what it takes to stop the incursion of these miracle products and to stop the subjugation of "normal" people by supermen. Ann Carter may be a superwoman herself. And, indeed, the destinies of Flanders, Vickers, Carter, and Crawford seem all to be most curiously intertwined.

This is a very imaginative and pretty thoughtful and ambitious story. Still, I don't think Simak quite brings off what he's trying. Vickers is a thinnish character, and his relationship with Ann Carter is thinner still. Simak's ideas, and his moral, are interesting, but not quite developed as well as I'd have liked. The conclusion is just a bit rapid. (Interestingly, he reused some of these ideas (not all!) in a later novelette, "Carbon Copy" (Galaxy, December 1957).)

Finally, I note that the novel is blurbed "Easily the best Science Fiction novel so far in 1953" -- New York Herald Tribune. I don't know when it appeared in 1953 (in book form), but that's a striking comment given that books published that year included The Demolished Man, Fahrenheit 451, Childhood's End, More Than Human, The Paradox Men, The Sword of Rhiannon, Second Foundation, and The Space Merchants. (This doesn't include serials from 1953 such as "The Caves of Steel" and "Mission of Gravity" that became books a year later.) 1953 was truly an annus mirabilis for the SF field, and Ring Around the Sun is a worthy supporting player among the long list of great work from that year.

Cosmic Manhunt, as I mentioned, is a slight revision of L. Sprague de Camp's 1949 serial "The Queen of Zamba". According to de Camp's foreword to a later reprint, the only change was in the name of the hero's sidekick. The Chinese name Chuen from the serial became Yano (Japanese, or more specifically Okinawan) in the Ace edition, due to Don Wollheim's concern that Chinese people were unpopular as a result of the Korean War. Otherwise the stories are identical as far as I can tell. The book was reprinted by itself by Ace in 1966, the title changed again, to A Planet Called Krishna. And it was reprinted in 1977, restored to the original text and title, in an Asimov's Choice paperback (from Davis Publications), with the Krishna novelette "Perpetual Motion" appended.

I believe this is the first of de Camp's Krishna novels. Quite a few followed, all with a Z place name in the title: The Hand of Zei (1951), The Virgin of Zesh (1953), The Tower of Zanid (1958), The Hostage of Zir (1977), The Bones of Zora (1983) and The Swords of Zinjaban (1991). These last two were co-written with his wife, Catherine Crook de Camp. (There is also a book called The Search for Zei which I assume is a retitling of The Hand of Zei. (It turns out that some editions split The Hand of Zei into two parts, with The Search for Zei being the other part.) The Krishna novels are the main part of his Viagens Interplanetarias series, which includes a number of other stories and the novel Rogue Queen (1951). The most recognizable gimmicks of the series are that the future Earth is dominated by Brazil, hence the lingua franca is Portuguese, and that space travel is restricted to light speed. De Camp claimed this was to keep the books SF: to violate relativity would make them fantasy. Maybe so, but the silly biology of the Krishna books seems equally fantastical.

In The Queen of Zamba (a title much to be preferred to Cosmic Manhunt in my view), private investigator Victor Hasselborg is hired by a rich man to track down his daughter, who has run off with an ineligible rogue. Hasselborg agrees to the job, then finds himself obligated to travel to Krishna, where the couple has apparently decamped (pun intended). Worse, he falls in love with the bad guy's abandoned wife, but she'll have to wait 9 years or so for him to return. (Krishna appears to be at Alpha Centauri or perhaps Barnard's Star, based on travel time.)

On Krishna, Hasselborg disguises himself as a Krishnan portrait painter. He follows the trail of the two lovers to one kingdom, where he meets the King (or Dour) and is rapidly slapped in jail. Before long he is fighting a duel for his life with the Dour. He escapes to another town, and falls in with the local high priest, also arranging to paint the Emperor's portrait. Unfortunately, the nubile (and oviparous) niece of the high priest takes a liking to him, and when he needs help the price is marriage. Meanwhile he runs into K. Yano (or Chuen), a ship companion who seems to be an Earth agent. They realize they are after the same people -- in Yano's case, because the bad guy is suspected of running guns to Krishna, with the object of making himself the planetary ruler. He has already taken over the island kingdom of Zamba (at last, the title becomes clear!). It is up to Hasselborg and Yano to foil the plot, and then resolve their conflicting requirements re the villains. (And in Hasselborg's case, worry about whether if he brings her husband to justice, his beloved will stay married to him, or ...)

It's certainly a pleasant adventure romp, with plenty of color and light-hearted humor. As SF, it's not really all that inspiring -- it could easily enough have been recast as historical fiction. Victor Hasselborg is enjoyable to follow, though his mixture of competence and what seems at times pasted on foibles and diffidence is not quite convincing. His romance is not too exciting -- the girl behind offstage for almost the entire book. Fun, worth your time, not an enduring classic.
Posted by Rich Horton at 3:59 PM