Birthday Review: Chimera, by Will Shetterly

Birthday Review: Chimera, by Will Shetterly

On the occasion of Will Shetterly's 63rd birthday, here is a repost of my long ago review of his 2000 novel Chimera. 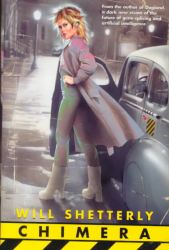 Will Shetterly’s novel Chimera mixes together a few fairly familiar SF themes: human/animal combinations, artificial intelligences, the issue rights for both of the above, and a somewhat balkanized (or at least decentralized) future U. S. with a Libertarian edge (viewed rather darkly, given Shetterly’s politics). The plot is taken from a familiar mystery trope (not uncommon in SF): the hard-boiled detective with a heart of gold who gets mixed up in a vulnerable woman’s problems despite himself. The end result is not bad: the book is fun reading, with very sympathetic main characters, and a fast-moving if sometimes a bit unconvincing plot. I liked this novel, but I didn’t quite love it: I felt it brushed up against some profound thematic material without really fully engaging it, and I felt that the future depicted was more an assemblage of neat bits than a fully imagined, or fully plausible, future society. Perhaps I am simply guilty of wanting to read a book the author didn’t intend to write: certainly Shetterly has delivered a good read, which at least asks the reader to think about some important themes.

The narrator is Chase Maxwell, a former member of UNSEC (apparently United Nations Security: some variety of future Peacekeeping group), who left that job after an assignment went bad. He retains one useful (and really neat!) piece of tech: an Infinite Pocket, an area of warped space attached to his arm, in which he can apparently store things of nearly arbitrary size. Including his gun, which has a similar bit of tech: a sort of “Infinite Magazine”. He’s down on his luck (naturally!) when a jaguar-human hybrid named Zoe Domingo asks him to track down her “mother”‘s murderer. (Actually, I’m not quite sure whether the “critters” of this book are “enhanced” animals, a la David Brin’s “Uplift”, or genetically engineered human/animal hybrids.) Janna Gold, the human Zoe calls her mother (she bought her out of slavery), has just been killed, apparently by berserk “copbots”. But the police department is much more likely to finger Zoe for the murder, given the prejudice against “critters”. Moreover, Zoe has a mysterious earring Janna gave her, which seems to be a piece of special tech that lots of highly placed people really want.

Max is reluctant to take the case: he doesn’t work for critters. But he’s in a bit of a bind, so he agrees to help. What follows is a nearly nonstop chase, as Max and Zoe encounter first the police, then a series of people who seem to be peripherally involved: Krista Blake, a police expert who takes a sudden shine to Max; Amos Tauber, an advocate for full rights for both “critters” and Artificial Intelligences; and Oberon Chain, the head of a high-tech company who is also an AI rights crusader. When some of these people begin to get murdered as well, the frame is in, and Max and Zoe are the designated suspects. At the same time, Max is realizing that his feelings for Zoe may be a lot deeper than is prudent for a human to have with respect to a critter.

From there we encounter a number of different aspects of this future, such as the indentured service camps that have replaced jails; and the “critter” side of town, complete with riots and reverse prejudice against “skins” (ordinary humans); plus scenes of critters “werewolfing”: suddenly going berserk and killing everybody in sight; as well as a very well put argument about the ethics of downloading human brains into computers, and vice versa, and plenty more. As I said, the plot is fast moving, and I was always interested, but at times things happen a bit conveniently for the heroes.

Chimera raises some questions that I didn’t feel were fully answered. Chief among these is “Why were the “critters” created?” I honestly don’t believe that, starting from the present day, the essentially purposeful creation of a new underclass, of that particular nature, is very likely. I also thought his future U.S. a bit unlikely, politically. But both of these reservations are really quibbles, and he does portray his future society quite interestingly. But always at the back of our mind is a desire to more fully engage the submerged issues: equal rights for “critters”, and equal rights for AIs. Those questions are raised, but mostly brushed aside, in the interests of maintaining narrative pace. Certainly a longtime SF reader cannot help thinking of Cordwainer Smith’s classic “The Ballad of Lost C’Mell”, about a “catwoman” who gives all in the pursuit of rights for the “underpeople”. But though such issues are present here, they simply don’t resonate the way they did in Smith’s great story. Nonetheless, though I may (perhaps unfairly) regard Chimera as a missed opportunity to be something really special, it’s still a fun read, with its heart in the right place.
Posted by Rich Horton at 8:54 PM