Birthday Review: The Biographer's Tale, by A. S. Byatt

I wrote this review back in 2004, and I'm resurrecting it in honor of A. S. Byatt's birthday. She is a magnificent writer -- I'm a particular fan of Possession, and of the utterly brilliant short story "Sugar", as well as the novellas of Angels and Insects. Much of her work if fantasy, or borderline fantasy. This novel is one of her less well-known books. 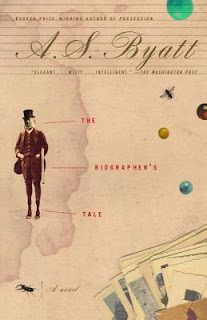 The Biographer's Tale, from 2000, is one of those books A. S. Byatt seemed to produce as a break from her "Frederica Potter" series. (I suppose one shouldn't call The Virgin in the Garden, Still Life, Babel Tower and The Whistling Woman the "Potter" series -- might cause confusion!) It's an enjoyable novel, fairly short, fairly amusing, with a number of surface similarities to Possession, but a very different overall feel.

Phineas G. Nanson is a very small Englishman, a graduate student in postmodern literary theory. (I say very small -- his description of himself is not specific, but I don't think he is meant to be a "dwarf" or "midget" or whatever the correct clinical term is -- rather, a very short, slight, man, perhaps 4'9" or 4'10".) One day he decides to chuck that branch of study, and a professor suggests as an alternative a study of biography, or, specifically, the three volume biography of Sir Elmer Bole, by Scholes Destry-Scholes. This biography turns out to be indeed fascinating, and Bole himself an incredible person, a Victorian polymath, who among other things married two women, a somewhat typical Englishwoman and a Turkish woman. Nanson decides to try to do a biography of Scholes Destry-Scholes. But he runs into trouble quickly -- Scholes is long dead, or at least disappeared, he isn't even really named "Scholes Destry-Scholes", and very little is known about him.

At this juncture the book seems ready to become a spiraling mystery built around curious small facts, and an elusive subject. Nanson discovers some papers left at his publishers by Scholes, that appear to be sections of contemplated biographies of other famous people, real people this time: Carl Linnaeus, Francis Galton, and Henrik Ibsen. But these prove problematic as well, as much of these accounts turn out to be invented. Nanson digs deeper, and at the same time gets a job, working at a curious travel agency run by a couple of gay men. The travel agency concentrates on unusual tours, thematically linked -- which corresponds fairly well to the inventions of Scholes re his subjects. Nanson's other diggings lead him to meet two intriguing but different women: a Swedish ecologist, or more specifically a bee expert, whom he meets at a museum dedicated to Linnaeus; and a radiologist, the niece and closest surviving relative of Scholes Destry-Scholes.

The rest of the book swings to "autobiography", as the subject becomes not Bole, or Scholes, or Linnaeus, Ibsen or Galton; but rather Nanson, in particular his relationship with the two women he has met, and his difficulties and successes at his new job. It's all pretty interesting, and fun, and generally unexpected. Some of it -- much of it -- has a distinct air of unreality. Byatt is always prone to fantastical writing even in her most mainstream stories, and here she is certainly brushing against the border of realistic fiction with -- what? I guess that's part of the question -- a question naturally posed when we consider a fictional biographer with an assumed name writing about a fictional person, but also writing about "real" people, though making up stuff about them. And so on -- consider the radiologist's art pictures -- X-rays presented as art -- are these bones the real people? Or Francis Galton's composite photographs ... or Henrik Ibsen's ideas about character ... or Linnaeus' classification schemes ... in many ways this is a "light" book but it is also an obsessively intellectual book (as usual with Byatt), and a fascinating read.
Posted by Rich Horton at 9:29 PM