Old Besteller: The Rose and the Ring, by William Makepeace Thackeray

Old Besteller: The Rose and the Ring, by William Makepeace Thackeray 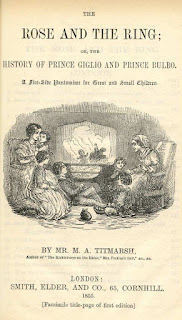 I've previously written about Thackeray, in the context of his great novel Henry Esmond -- in my opinion one of the very best novels of the 19th Century. This time around I'm covering something much lighter -- the last of several "Christmas books" he wrote under the name M. A. Titmarsh, and generally the best regarded of those. These were more in the vein of entertainments appropriate for reading at the Christmas season than, necessarily, books that directly concerned Christmas. At any rate, I'll begin with the biographical snippet I wrote before.

William Makepeace Thackeray was born in India in 1811 -- his father was a secretary for the British East India company. William came to England in 1815 after his father's death. He was educated at Charterhouse School and at Cambridge, but did not take a degree. He spent the next several years more or less wasting his time -- some travel, some apparently desultory studies of law and art, failed attempts at starting two newspapers. His family had money, but Thackery lost some of it by his own efforts and more after a couple of Indian banks failed. So upon his marriage in 1836 he had to support his family, and he turned to writing. He wrote for various magazines (Fraser's and Punch among them), doing reviews, satirical sketches, and some travel writing. He published a couple of novels (Catherine and Barry Lyndon) before becoming famous with the publication of Vanity Fair in 1848. He and his wife had three daughter. One died in infancy. The eldest, Anna Isabella, became a well known novelist in her own right. The youngest married the famous critic Leslie Stephen. After the birth of their third child, Thackeray's wife succumbed to depression, and eventually had to be committed to an asylum. Thackeray died quite young, in 1863. (Indeed his wife, still insane, outlived him by over 30 years.)

The Rose and the Ring is the last of his "Christmas novels", published at Christmas, 1854. (The previous set, totalling five, I believe, dated to the 1840s.) It's a very short novel, something less than 40,000 words by my estimate. It's copiously illustrated, by Thackeray himself. My copy is the Wordsworth Classics edition.

It's a wholly satirical story, concerning the countries Paflagonia and Crim Tartary. The two countries have been at war often, but now are expecting a marriage between Angelica, the only daughter of the King of Paflagonia, and Bulbo, the son of the King of Crim Tartary. The complication is that both Kings are recent usurpers. In Paflagonia, the new King took over when his nephew Giglio was only an infant; while in Crim Tartary Duke Padella rebelled against the rightful (but not very good) King, and the toddler Princess Rosalba was thrown into the woods and eaten by lions. All this, it turns out, was the doing of the Fairy Blackstick, who, in the way of fairies, was offended by the royal families. But, we are told, Blackstick, who has noticed how bad all these royal people turn out, has decided that a bit of misfortune in the lives of the young children will be good for them.

So you can see what's going on -- the Princess Rosalba was not actually eaten by lions, but managed to wander into Paflagonia, where she became the much put upon maid to Princess Angelica. As for Prince Giglio, he has grown up, still rather spoiled, in the Palace, with the expectation of marrying his cousin and becoming King in the end anyway. But now that Angelica will marry Bulbo, his hopes are dashed. Which, in reality, after a bunch of events, means he'll notice the virtuous maid (now called Betsinda) of Angelica ...

The plot is driven to a great extent by more mischief from the Fairy Blackstick, in the form of a rose and a ring, each of with renders the bearer attractive to all who see them. Those work well enough that when Angelica and Bulbo have them, they are happy to be engaged to each other ... but as the objects move on to other people, complications ensue.

But no more about the plot. Suffice it to say that all works out well at the end (except for the people who end up killed!) But in the mean time there are amusing issues such as the King's Butler being turned into a doorknob, and his unpleasant wife, now the Countess Gruffanuff (Thackeray has lots of fun with names -- there's also a General Hedzoff) plots to marry Giglio. And Betsinda/Rosalba is thrust out of the palace again. Giglio himself end up in exile. There are orders to execute Giglio and (by mistake) Bulbo as well. And in the end inevitably war.

So, a fairly conventional fairy tale plot. The pleasure -- and there's a good deal of pleasure -- is in Thackeray's exaggeratedly satirical view of everything. The writing is very funny throughout. I noted the fun with names, but also the characters are depicted with a nasty joy. Certainly the pretensions of aristocracy are mocked, and indeed the foolishness of almost everyone. But it's mostly somewhat gentle under the surface (the story is nominally for children, after all). The drawing -- also by Thackeray as I note, are fun as well. This is a slight book, of course, but a fun one.