Today is Eric Brown's birthday -- he becomes another writer who just caught up with me in age again, at 59. For his birthday, I've reposted my review of his collection Threshold Shift, from the October 2006 Locus, and I've appended a couple more reviews of short work by him. 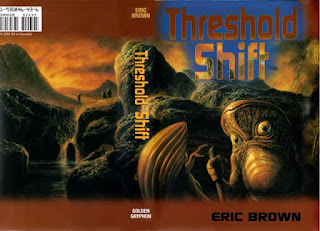 When considering single author collections, the “theme” is not so much the concern. Often, indeed, one wants the opposite: a representation of the writer’s range. Especially with an author’s first American collection. This book does a good job representing Eric Brown’s range: it depicts him doing what he does best very well. And what he does best is colorful, unabashedly story-centered, rather old-fashioned in settings and plots, but if old-fashioned on the outside still quite thought-provoking on the “inside”.

Brown has been a very prolific writer of short fiction over the past 20 years or so, but he is not very well-known in the U. S. The great bulk of his stories have appeared in British magazines: mainly Interzone, but also Spectrum SF, Postscripts, and others. (He was also a regular in the US magazine Science Fiction Age before its unfortunate death.) He has twice won the British Science Fiction Award. This fine collection will hopefully introduce him to a new set of readers: it is his first to appear in the US (he has had two earlier British collections).

I’ve long enjoyed the best of Brown’s stories, while finding him a bit uneven. Threshold Shift is a strong selection, featuring his two BSFA winners. One story, BSFA winner “Hunting the Slarque”, is from an extended series documenting the last years of the planet Tartarus, whose sun is about to go nova. I thought the series a bit repetitive, but selecting one story avoids that problem. “Hunting the Slarque” is Brown at his most, well, lurid, but still satisfying, about a Hunter hired to track down the two surviving legendary Slarque, creatures native to Tartarus, creatures who (along with some humans) wish to stay on Tartarus and perish with the planet.

Three stories come from a long series of stories, collectively my favorites among Brown’s work, concerning the alien Kéthani, and their gift to humanity: immortality. Brown’s usual concern with the stories is the ethics of immortality, as opposed to the Kéthani themselves. For example, “Thursday’s Child” very movingly considers a couple with opposing views: the husband is in favor of accepting the Kéthani offer, and indeed he works in “collection”: picking up the dead and sending them via Onward Station to the Kéthani planet for resurrection. But the wife is opposed, and she has resisted allowing their daughter to be implanted with the chip that allows resurrection. But then the daughter becomes ill … In “The Kéthani Inheritance”, it is the man of a couple (in this case a new couple) who resists implantation, partly because he’s not sure bad people should live forever. But his new lover doesn’t want to lose him, and when both lose their parents, their perspective is altered. The other Kéthani story is a bit different. “The Touch of Angels” is the only original in this book, a murder mystery which ends up giving us a bit more insight into Kéthani motives than previous stories.

Other highlights include the other BSFA winner, “The Children of Winter”, a colorful romantic story of an alien planet with multiple races, including of course the mysterious humans; and a collaboration with Stephen Baxter, “The Spacetime Pit”, which reminded me of an old Algis Budrys story, “The War is Over”, as it told of a woman crashed on a primitive planet, and her long wait for the inhabitants to develop the capability to save her.

The rest of the collection is also entertaining. Eric Brown is a so far underappreciated writer – perhaps because he’s not really flashy and new, perhaps because his lesser works are sometimes disappointing. But he does what he does best very well, and work like that showcased here is very fun – and also thematically engaging.

From my summary of Spectrum SF for 2000

The two novellas published this year were "Destiny on Tartarus" by Eric Brown and "Great Wall of Mars" by Alastair Reynolds.  Both are colourful and exciting, well worth reading, but not quite Hugo material.  The Brown story is the first (in internal chronology) of his Tartarus stories, about the planet of a Sun which is about to go nova.  This story is set a century before the nova, so it's not about the impending nova like the other stories, which I think may be why I liked it the best of all the Tartarus stories.  (For one thing, it avoided repeating the same plot elements and thematic elements that several other stories had.)

Cemetery Dance remains perhaps the most reliable source of well-written contemporary horror. In #54 I was taken with a clever story from Eric Brown, “The Man Who Never Read Novels”, in which a horror novelist meets a man on a train who confesses to not reading contemporary novels – for an interesting reason. Of course the writer is compelled to press his new manuscript on him … with amusingly mordant results.
Posted by Rich Horton at 5:49 PM