It's Alter S. Reiss's birthday today. He's only been publishing fiction since 2010, but I've known him much longer (online, that is) -- he was one of my favorite regular posters in the glory days of the usenet newsgroup rec.arts.sf.written. We have met in person, at a few different conventions. I was very pleased to see him start publishing, and even more pleased to find his work so good. Here is a collection of my reviews of him from Locus.

Another online magazine, Abyss and Apex, introduces Alter S. Reiss in its Fourth Quarter 2010 issue. Reiss’s first published story is a nice one: “Rumor of Wings”, about a mysterious woman trying to find a very important – to her – bracelet. It’s a milieu of shape changers, like gull people – and like the protagonist, whose true form we learn only at the end.

Daily Science Fiction is a website that opened late last year. They publish a new story each weekday. Not surprisingly, many of these stories are very short, and the quality is uneven. But they do publish the occasional longer story (usually on Friday), and some nice stuff. Perhaps my favorite from the site to date is “Memory Bugs”, by Alter S. Reiss (2/8), about a man who uses a new technology to record memories of his times with his lover, and seems to lose the distinction between reveling in memory and creating new memories.

Somewhat belatedly I got to the May issue of Australia's Andromeda Spaceways Inflight Magazine. Two stories stood out for me. Alter S. Reiss, who has been consistently good with his first few published stories over the last little while, offers “Server Issues”, which is at its most basic level a story about an expert helping track down some stolen servers. A bit dry, eh – but the bite comes from a key background deal: crowd sourced bounties on people, such that someone who gets a lot of people a little bit angry might attract a big enough bonus for his murder to get in real trouble. The story neatly fills us in on the consequences and some of the details of such a system.

In December, Strange Horizons features another good story from Alter S. Reiss, who has impressed me with both the quality and the variety of his stories this past year or two. “America Thief” is a gangster story, with characters including Bugsy Siegel and Arnold Rothstein. The narrator is a small-time hood who is also a magician, and the son of a rabbi. He is pressured by Rothstein to investigate a local boy who seems to be turning lead into gold – a job that ends up stressing his shaky morals, his belief in truth, his care for his girlfriend, and his concern for his community – a well-told and original story. 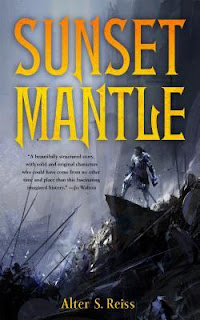 The third novella, Sunset Mantle (Tor.com), is from a much less prominent writer, Alter S. Reiss. It comes from Tor's new series of novellas, available electronically and in paperback. Cete is a veteran soldier, unjustly dismissed from his previous service, wandering and looking for work in a place called Reach Antach, when he comes across a lovely mantle, and the intriguing blind woman, Marelle, who wove it. Against his better judgment he decides to stay and join the local army, at unattractive terms, for a chance to commission another piece from Marelle. He soon realizes the political situation is more tangled than he had realized, and is forced again to an unjust punishment, only to seek redemption in attempting to saving the Reach at impossible odds. It can't be denied that the story hits some only too familiar notes, but it does so effectively. It bears comparison, in a way, with the work of K. J. Parker – set in a non-magical fantastic world, dealing with war and politics in a medieval technology world – but with none of the cynicism. The pleasures are real, if quite different to those in Parker.

In Beneath Ceaseless Skies I found a couple of nice if not quite brilliant stories from newish writers whom I’ve been following with interest. Alter S. Reiss’s “Sea of Dreams” (3/31) follows a deposed Emperor, Ierois, who has been exiled to an island in the Sea of Dreams. He is joined, decades later, by a boy, exiled for similar political reasons (the Empire appears to have Game of Thrones-style politics). But the boy has ambitions of returning – and he is convinced that what he finds washing up from the sea will aid him, not understanding, as Ierois has learned, that what the Sea offers are only dreams, illusions. A nice conceit – and Reiss moves the story in a slightly unexpected direction.