Today is also Geoffrey Landis' birthday. He's really good at short hard SF, and here's a set of my Locus reviews of his short fiction (alas, not as much as I'd like!) I've also added my review of his only novel, Mars Crossing.

The best of the many short stories in the July-August Analog is Geoffrey A. Landis' "Falling Onto Mars", a cynical but still hopeful story of the founding of Martian civilization in a clash between a scientific base and the prisoners that Earth has cruelly abandoned on the barely habitable planet.

The October/November issue of Asimov's is another impressive one. Effective if old-fashioned is Geoffrey A. Landis' "At Dorado", about a barmaid at a wormhole station. There is a wreck, and she fears her lover might be a victim. All this, and the general shape of the working out of the story, is familiar, going back to countless sea stories, but Landis adds a stark, moving, twist based on the physics of wormhole travel.

DAW's "monthly magazine" of themed anthologies offers a reliable if seldom exciting source of new SF and Fantasy. 2004 opens with one of the stronger books in the series, Gregory Benford's Microcosms, about closed environments, "small worlds", whether they be small universes, computer simulations, asteroid habitats, or something else. I  quite enjoyed Geoffrey A. Landis's very short "Ouroboros" (a reprint from Asimov's in 1997), again a clever and twisty piece, about a computer-simulation of a universe -- or several.

Financial manipulation is also at the heart of Geoffrey Landis’s fine “Betting on Eureka” (Asimov's, October-November). Eureka is the name given an asteroid said to be stuffed with valuable ores – but the two discoverers are both dead. The narrator is an information broker, and he encounters a down on his luck miner who says he was the partner of the other two – and that he can figure out where they must have found the rock. Why is he telling this story? Well, information is valuable, and so especially is its effect on financial markets. This is a clever and amusing story.

The January-February Analog double issue includes an update of Ross Rocklynne’s classic “The Men in the Mirror” by Geoffrey A. Landis: “The Man in the Mirror”, in this case about one asteroid miner trapped in a perfect mirror.

Geoffrey Landis offers a novella in Asimov’s for September. “The Sultan of the Clouds” is told by David Tinkerman, a technician who is a sort of companion or assistant to Leah Hamakawa, a brilliant woman and terraforming expert. David, of course, desperately loves Leah, who barely notices him. They live in a colonized future Solar System, mostly dominated by the descendants of a few people or corporations that succeeded in staying in space. One of these people is the scion of the Nordwald-Gruenbaum family, which controls much of Venus. He summons Leah to his floating city in Venus, for mysterious reasons. Isolated from Leah, David learns something of the real politics of Venus, complexified not only by cities independent of the Nordwald-Gruenbaums, but also by the social structure of Venus, built around “braid marriages”. David also learns that the heir to the Nordwald-Grueneman holdings has some interesting plans for Leah, both in a personal and scientific sense. It’s fascinating and colorful stuff, with some interesting social details and a neat conclusion based on a hard SF idea (literally). 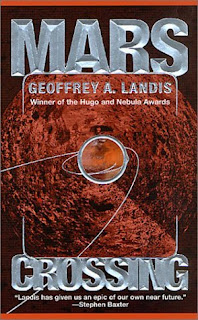 Geoffrey Landis' first novel is Mars Crossing. Add another to the huge list of recent Mars books.  The setup for this book is kind of depressing: the world is going to pot. Two expeditions, one Brazilian and one American, have made it to Mars but have failed to return. There is only one more chance: the backup American expedition can go, though only with gimmicky financing (a lottery for a chance to accompany the expedition). An international crew (one Thai, one Canadian, one Brazilian, and three Americans including the lottery winner) successfully lands on Mars, but almost immediately disaster again strikes. The vehicle that was sent in advance, to brew up the fuel for the return, fails spectacularly, killing one member of the expedition and losing all the return fuel. They realize that their only hope for return is to trek to the North Pole, where the Brazilian return vehicle was left, and try to find a way to adapt that vehicle to their needs.

The trek is exciting and dangerous and very well described. Landis has great fun with putting obstacles (literally and figuratively) in his characters' way. The landscape of Mars is extremely interestingly described and so is the technology.

The characters are a bit less successful. They seem drawn from bestseller-land -- appropriately diverse, appropriately screwed up, full of dark secrets in their pasts.  Landis works very hard at trying to portray each character -- to give each character a set of tics and problems, and in so doing I felt that he protesteth too much, and that the effort showed, the sweat showed. They did not come alive for me. Also redolent of bestseller-land were the very short chapters -- seeming to be sized to fit presumed short attention spans. It should be said that that technique seemed to work in making the book a rapid read. At any rate, in terms of characterization and writing style, and also to some extent in the care lavished on presenting the technology, I thought the book mildly reminiscent of Ben Bova's recent Insert Name of Planet Here series.

I should say that in the final analysis I quite enjoyed reading Mars Crossing.  Relative to the best of Landis' short fiction it's a bit of a disappointment, but looked at as a first novel, and as a piece of hyper-hard SF, it's pretty good.
Posted by Rich Horton at 8:03 PM