Today is Catherynne Valente's birthday, and so here's a selection of my Locus reviews of her short fiction, a great way to experience some of the loveliest prose in the field of recent years. She's on the Hugo Shortlist for Best Novel right now, for Space Opera.

Last year on this date I posted my review of her lovely novel The Orphan's Tales: In the Cities of Coin and Spice.)

Slightly more strongly themed is Mythic 2, a short anthology focused mostly on fantasy (stories and poems) with a fairy tale slant. Catherynne M. Valente’s “Temnaya and the House of Books” plays bitter variations on multiple familiar tales (at least “Snow White”, “Cinderella”, and “Hansel and Gretel” that I recognized) in telling of a daughter rejected by father, mother, and stepmother.

Electric Velocipede’s Fall issue includes “yet another Snow White” retelling, “Milk and Apples” by Catherynne M. Valente. Here the stepmother is a wet-nurse, a victim of her demanding stepdaughter, and her predicament is harshly and elegantly portrayed.

Catherynne M. Valente's "A Dirge for Prester John" (Interfictions) is a delightfully exotic story of the legendary Prester John in the fantastical land he encountered -- complete with such creatures as the phoenix, the gryphon, and the blemmye.

Catherynne M. Valente’s “A Buyer’s Guide to Maps of Antarctica” (Clarkesworld, May) is a delightful story of obsessive rivalry between two Argentinian mapmakers, of a perhaps slightly alternate Antarctica – one is naturalistic, one artistic – and it’s easy to guess which mapmaker is more interesting.

Another strong online site, Clarkesworld, has been showcasing a lot of decidedly odd SF this year, and from August comes one of the oddest and most intriguing: “The Radiant Car Thy Sparrows Drew”, by Catherynne M. Valente, a difficult to describe but ever fascinating story, set in a sort of steampunk alternate Earth, and concerning the lost last film of a documentary filmmaker called Bysshe, about a mysterious city on a strange Venus.

Lightspeed in its third issue features two original stories distinguished by the originality of their ideas, and by some distinctiveness in the telling. “How to Become a Mars Overlord”, by Catherynne M. Valente, purports to be a manual for potential rulers of the Red Planet – of any red planet of the many Mars analogs dotting the universe. The descriptions of variant overlords are well done, and the philosophical musings driving the piece are also worthwhile – so I enjoyed it, but in the end felt it a bit short of “story”. 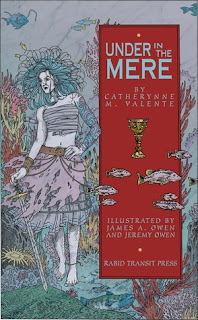 I’ve been keeping an eye on the various novella-length chapbooks available. Rabid Transit Press offers their second novella, Catherynne M. Valente’s Under in the Mere. This is a beautifully written (as we expect from Valente) series of pieces from the point of view of many of King Arthur’s knights, all from original angles, with a certain emphasis on California. I didn’t find it wholly successful – it has a static feel, and works more as a sort of commentary on the Matter of Britain than a complete story.

At Tor.com for July there is a delightful story by Catherynne M. Valente, “The Girl Who Ruled Fairyland – for a Little While”, set in her Girl Who Circumented Fairyland in a Ship of Her Own Making world, about Mallow, who answers the King’s summons to the Foul, only to learn that the King, and Politicks, are bound to ensnare her. It’s full of whimsy – the serious kind – and linguistic invention, and a light touch over sometimes dark matter – first rate.

Nick Mamatas and Masumi Washington offer The Future is Japanese, which collects a number of SF stories about, in some sense, a Japanese future, as well as a few stories by Japanese SF writers. ... “One Breath, One Stroke”, lovely fantasy from Catherynne M. Valente, about a house half in the real world and half in another place, such that the calligrapher who lives in the human half of the house is a calligraphy brush in the other place. The story follows the lives and loves of the brush's fellows in the other place, such as a skeleton woman and a catfish … Valente at her exquisite best.

There is also the conclusion to a long novelette by Catherynne M. Valente, serialized in Clarkesworld in February and March, “The Long Goodnight of Violet Wild”. This is excellent work, extravagantly written on the subject of color, partly. Violet is “just a kid with hair the color of raisins and eyes the color of grape jelly”, from the Purple country of course, with her Mummery a Clarinaut and a sometime lover of the Ordinary Emperor, and her Papo is a Nowboy, herding mauve squirrels. Violet's best friend is a boy named Orchid Harm, and when he is killed, she and her Sorrow decide to travel across the 7 countries of the world to the Red Country. The story is luscious fun to read, partly for something as simple as the color words we encounter, the imaginative playing with time and with character and action is all of a lovely piece.

Beneath Ceaseless Skies for May 25 is their 200th issue, so a special one, with twice the stories. And it’s exceptional: four first-rate pieces. Catherynne M. Valente’s “The Limitless Perspective of Master Peek; or, The Luminescence of Debauchery” is a gender-bending piece about a woman who inherits her father’s glassblowing business, and learns that her customers would rather deal with a man. So we continue, with Master Peek, who is gifted with unusually long life, acquiring several wives, a great deal of wealth, and eventually a fortuitous discovery – that the remarkable glass eyes he makes allow him to see what the wearer sees. Master Peek’s long career continues, especially when he falls for a dangerous and less than dependable woman … Valente’s prose, here pitched a bit to the humorous end of the scale, is a delight as ever, and so too is her extravagant imagination.

Jonathan Strahan’s new anthology is Drowned Worlds, a climate change anthology. Maybe because the theme is pretty depressing the two stories I liked best are somewhat desperately comic, and even almost optimistic, if sometimes in a black way. ... Less satirical is “The Future is Blue”, by Catherynne M. Valente. Tetley Abednego is a much detested woman in a city built on a massive raft of plastic garbage in the sea. The story tells of her childhood, her beloved twin brother, the boy she falls in love with in Electric Town, and the terrible but necessary thing she did that has led to her ostracism. It sounds depressing, but it’s not really, and it’s very imaginative, and, as I suggested, almost, in a black way, hopeful.
Posted by Rich Horton at 5:35 AM