"Newish" Bestseller: The Girl's Guide to Hunting and Fishing, by Melissa Bank

The Girl's Guide to Hunting and Fishing, by Melissa Bank

This blog is ostensibly devoted to (besides SF related subjects) "Old Bestsellers" and "Forgotten Books". But sometimes I have to cheat, especially when, Due To Weddings, I haven't finished my latest old book. So I've exhumed a review I did of a book that was quite a success when it first appeared 20 years ago. Alas, the author has published just one more book, a collection of short stories in 2005, and as a result, I sense this book may be in danger of being truly a "forgotten book", even so soon. And it's not a bad book, so I'm happy to bring it some notice. I wrote this in 2002 or so. 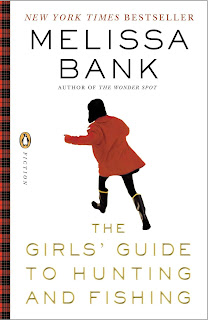 The Girl's Guide to Hunting and Fishing, by Melissa Bank, attracted a fair amount of praise when it appeared in 1999, and I believe also sold very well. I had noted it in the back of my mind as potentially interesting. At my brother's house last month I noticed a copy on his bookshelf. It seems his wife had read it and enjoyed it. I started into the first story, upon which my brother asked, half-jocularly (but probably no more than half,) "Why are you reading THAT! It's a chick book." Which indeed it is, but a good chick book is good reading for men as well!

At any rate, as if it were a message to me, I saw a copy in a remainder store later in our vacation trip, so I bought it. It's a collection of closely linked stories, what would be called a fixup and marketed as a novel in the SF field. As a mainstream book, it is genteelly labelled "Fiction", no mention of whether it's stories or a novel. In fact all the stories but one are about Jane Ravenal, a young woman from New Jersey, who becomes an editorial assistant and then something in advertising in New York. (The other story is given a tenuous link to Jane (it's set in another apartment in the building she is living in, and in a later story we are allowed to see Jane witness an event from this story, though she doesn't know at all what's going on).) The unifying link is, not surprisingly, her search for, well, let's just call it true love. The stories are closely enough linked to make the collection work as sort of a novel, and indeed bits and pieces of the later stories wouldn't make sense without having read the earlier stories.

The opening story is set at the Ravenal family's summer cottage. Jane is 14 or so. Her 20 year old brother brings home a 28 year old girlfriend, and we witness the arc of that relationship through Jane's eyes. The next story tells of a somewhat disastrous vacation with her first live-in boyfriend. A couple stories tell of various stages in her affair with a much older novelist and editor. There is the unrelated story, a mother telling of her son and his curious relationship with his ex-wife and his new lover. One story tells of an affair with a hunky but ultimately unsatisfactory man. Interleaved with all of these are other aspects of her life, particularly her relationship with her parents (generally quite good). The final story, inevitably, is about the beginnings of what seems destined to be "true love".

I quite liked the book. Jane's voice is well-maintained. It's funny, well-observed, breezy, at times perhaps a bit too much so. The last story was a bit pat -- we know going in how it's going to end, pretty much. (Though it does contain a nicely judged dissection/parody of a book clearly meant to be the notorious The Rules, that book which advised women to act like idiots to "catch" a man.")
Posted by Rich Horton at 4:36 AM