A Lesser-Known Philip K. Dick Novel: Time Out of Joint

Time Out of Joint, by Philip K. Dick

No Philip K. Dick novel can be called "forgotten", but it seems to me that this novel has become less known than it deserves, because I think it's one of his best novels, and probably his very best novel prior to The Man in the High Castle. Here's what I wrote about it some time ago, a fairly brief look at the book.. 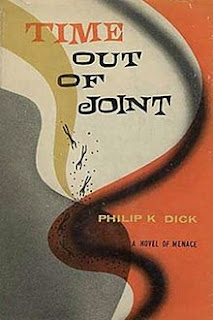 One of Philip Dick's more noted early novels is Time Out of Joint, from 1959. This was originally published in hardcover by Lippincott -- perhaps Dick's first appearance between boards. Lippincott was at that time publishing the occasional SF book -- A Canticle for Leibowitz was another -- though carefully disguised. For instance, Time Out of Joint was not presented as SF, but as "A Novel of Menace".

The setting is what seems a first a slightly altered 1950s. The main character is Ragle Gumm, who makes his living solving a puzzle for a newspaper. Ragle lives with his sister and her husband. He carries on a somewhat unsatisfying affair with the rather immature wife of a not very pleasant neighbor. And he worries about his curious standing as the reigning puzzle-solving champion.

Slowly we realize that his world is somehow artificial. He (and his brother-in-law) uncover curious buried items, occasionally see strange things that seem to imply most everyone in the town is artificial, hear odd transmissions via crystal radio, and so on. One of the most symbolic findings is slips of paper with names of objects -- "the word is the thing", anyone? Most significant is when Ragle stumbles across newspapers and magazines from the future (1998 or so -- why is 40 years such a  common SF near future?)

The general outline of what's going on with Ragle and his family should be relatively clear -- I'll leave the specific solution and the motivations for readers to discover. The basic idea is, then, familiar enough -- redolent of Daniel Galouye's slightly later novel Simulacron-3, just to name one. What makes the book stand out is for one thing the way Dick uses the 50s setting to comment, as if from the future, on the 1950s (and to do so with an aspect of nostalgia that almost makes the book seem as if written in 1998), also the portrayal of the characters, and finally a certain charged feeling of strangeness -- very much a central feature of much of Dick's work -- that gives the idea of inhabiting an artificial world -- "word as thing" or "signifier as object" if you will -- real psychological immediacy.