Annalee Newitz is primarily a science journalist, I believe, and so she hasn't written a ton of fiction. But I've liked what I've read. On the occasion of her birthday, then, here's my two reviews from Locus of her short stories, plus my review of her novel Autonomous, reposted from last year's Nebula Ballot review post.

In the November Lightspeed my favorite story is "Drones Don't Kill People", by Annalee Newitz, which on the face of it is a bit cliche, about drones coming to self-awareness and realizing that their uses -- covert surveillance and assassination -- are immoral. But Newitz wraps this is an unexpectedly engaging and convincing tale, beginning with horror and ending with hope, with non-human characters that really hold the interest.

In Robots vs Fairies ... I liked Annalee Newitz’ “The Blue Fairy’s Manifesto”, set in the future of her novel Autonomous, and featuring a robot calling itself the Blue Fairy setting free other robots, including in this story a robot RealBoy. Newitz’ story is particularly interesting (to me), reiterating some of the themes of Autonomous in asking what freedom really might mean for robots. 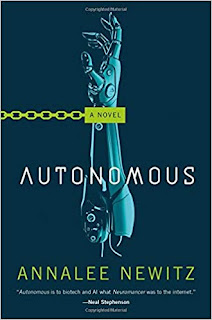 Annalee Newitz' first novel, Autonomous, is on the Nebula shortlist. I'd heard lots of buzz about it already, and I knew I liked Newitz' writing (I used her 2014 story "Drones Don't Kill People" in my Best of the Year book), so I meant to get to it -- and I finally did. I have to say, it met my expectations -- it's a really cool book, really hard SF, exciting and scary and moving.

Jack Chen is a patent pirate -- she reverse engineers patented drugs, sometimes ones critical for the health of people who can't affort corporate medicine, and sometimes just for money (a woman's got to live, after all). But her latest effort, a drug called Zacuity, which makes people love their jobs, and want to keep working, has backfired badly -- people are getting addicted to work, to the point of ignoring things like food. She desperately needs to find a cure, and her only hope might be her old lover Krish, who betrayed her a quarter century ago, when she went to jail for her anti-patent activism. She ends up freeing an indentured young man called Threezed (after the last two characters in his ID), and they make their way across Canada to Krish's lab, and to a safer place to work.

Meanwhile they are being chased by agents of the International Property Coalition, which enforces patents. The two assigned to her case are a human named Eliasz and a military bot named Paladin. Bots are nominally indentured for 10 years after their creation, after which they can become autonomous. (Similar rules apply to humans who have been indentured.) Not surprisingly, autonomy isn't quite as easy to achieve as that. And Paladin hardly knows what they -- he? she? it? -- wants -- as most of their wants are controlled by programming.

The story is on the surface about patents and drugs and so on, and about the tense chase as Eliasz and Paladin home in on Jack. And all that works really well. But that's just the surface -- an important surface, to be sure. But the title tells the truth -- the heart of the novel is "autonomy". For bots, sure -- Paladin's eventual realization that they might like to be autonomous is a major issue. But for humans, as well -- Threezed, in particular, who was indentured and sold and had his indenture extended for obscure legal reasons, wants autonomy and is pretty cynical about the whole thing.

But there's more -- what autonomy, for example, do workers who have been given a drug like Zacuity possess? How about Med, a heroic bot researcher who was created as a never-indentured bot -- is she truly autonomous or does her programming control her? And even when Paladin attains autonomy it's temporary -- and can she (as she by then identifies, sort of) trust her "feelings"? What about Eliasz? He's a fanatic about human indenture -- he hates it. And he loves bots, especially Paladin. But he's on the side of a truly evil entity -- well, mostly evil -- and in their service he -- and Paladin -- commit horrible murders. Are they autonomous in so doing?

This is a very thought-provoking book, and tremendously exciting. It's exceptional hard SF. It's not perfect -- the author's hand can be seen on the scales on occasion. And the end is fuzzed just a bit -- there's a cynical side to it, to be sure, but also some convenient resolutions. But what book is perfect? I really liked this novel, and it's pushed its way onto my Hugo nomination ballot.
Posted by Rich Horton at 7:55 PM