Birthday Review: A Posse of Princesses and Senrid, by Sherwood Smith

Today is Sherwood Smith's birthday. I've known Sherwood online for a couple of decades, but we first met in person last fall in Montreal, at Jo Walton's immensely enjoyable convention Scintillation. Sherwood signed my copy of A Posse of Princesses there. I've read most of her books, many of which are set in the same secondary world she's been playing with since her teens. Last year on this date I posted a review of Inda, a wonderful novel. Today I'm posting reviews of a couple of lesser works from the same milieu, though when I less "lesser" I should emphasize that they are still extremely enjoyable. I've appended a few reviews I did for Locus of her short fiction.

A Posse of Princesses, by Sherwood Smith 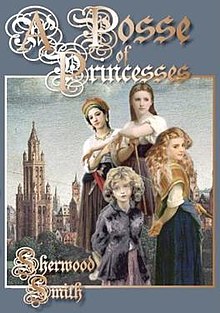 The new small press Norilana has been very busy lately, and one of the best things they are doing is releasing a number of Sherwood Smith Young Adult stories under their “YA Angst” imprint. The second of these I’ve seen is A Posse of Princesses. This is a confection, a delight, just a good deal of sensible fun.

Rhis is the younger daughter of the King of Nym, a small mountainous country on a fantasy world that at least resembles the worlds of Smith’s other novels, such as Crown Duel, Inda, and the Wren series. Her brother and his dull, strict, wife are to be the rulers after her father, and her older sister will be the Court Magician. So, like younger children of royalty throughout history, Rhis’s destiny seems a politically useful marriage. But Rhis is a romantic girl, fascinated by ballads and adventure stories, to the disgust of her sister-in-law. And furthermore Nym is isolated and unconventional, and Rhis doesn’t really know anyone outsider her family. A chance to remedy this situation comes when the Crown Prince of the much larger country Vesarja invites a large group of nearby royalty and nobles to a few weeks visit. It is clear that Prince Lios is looking for a wife. And even if Lios is not the man, surely there will be other eligible young men in attendance.

So Rhis journeys to Vesarja, accompanied by her sister-in-law’s younger sister Shera, whom Rhis is delighted to learn is not at all the stuffy prude her (much-vetted) letters made her appear. The two new friends come to Vesarja, and Rhis immediately falls hard for the devastatingly handsome Prince Lios. Shera, who already has a boyfriend at home, seems ready to run through several more boys herself … Rhis learns a lot about herself quickly, as she must deal with her feelings for a young man she hasn’t really even met, plus handle the nasty but beautiful Princess Iardith, while also befriending other youths, such as the language-handicapped cousin of the Prince. Then everything changes when Iardith is abducted, and Rhis and her new friends decide to mount a rescue attempt all on their own.

It will be clear that in some ways this is a featherlight concoction. Certainly Rhis is a character for the reader to happily inhabit – she is honest, talented but not absurdly a genius, very nice. And her story has aspects of, well, convenience and luck. But not to a silly degree. I was pulled by the story, and I was happy to root for Rhis. A Posse of Princesses isn’t a masterpiece, but it’s a very enjoyable and grounded YA fantasy. 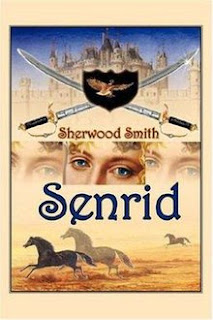 Sherwood Smith originally wrote this novel at the age of 15. To some extent this shows – it is very Crown Duel, and last year’s very fine Inda (which is set as far as I can tell some centuries before Senrid, in the same kingdom). Senrid is the boy King of the warlike land Marloven Hess. His wicked uncle is Regent, and has impressed on him a need to avoid weakness. Signs of weakness include altruism, romance, and white magic. The Regent wishes to reconquer territory Marloven Hess controlled in the past, such as the tiny and peaceful Vasande Leror, also ruled by a boy King, but one whose strength is white magic. After Vasande Leror magically resists one invasion, Senrid is pressured to kidnap and execute the children who foiled his plans, but a daring rescue saves the day. In the process Senrid is sucked out of his kingdom, and the Regent takes over. Senrid must learn to cooperate with his former enemies, as well as learning the value of the rule of law and fairness, in order to depose his Uncle. The story is an enjoyable read, if not as good as for instance Inda. It is a bit too episodic, the magic at times seems too arbitrary, the characters are well enough depicted but not as well-rounded as they might be, and such details as the invented slang grate at times. Still, I liked it on the whole, and I’ll be glad to see further tales of this group (though I hope the kids grow up!)
much a story of kids (magically kept prepubescent) having adventures in a fantasy kingdom – with one or two characters (significantly named) who seem to be the author’s counterparts, even to the point of actually coming from Earth. It is set in a world she began dealing with aged 8, and in which she has set many of her novels, including the fabulous

Lone Star Stories is approaching two years of regular bimonthly web publication. From issue #11, October, I think I liked Sherwood Smith’s “The Hero and the Princess” best, though Stephanie Burgis and Jay Lake also contribute good work. Smith’s is a down-to-earth story about a young man who wants to be a hero, and his encounter with a woman who shows him that real heroism is more complex than just good swordsmanship.

Another new online magazine is Coyote Wild. The first issue has a generous helping of fiction, including a novelette and even a novella. The latter is Sherwood Smith’s “Summer Thunder”, actually part of a novel project, but successful on its own. Long peaceful Colend is menaced by a neighbor, perhaps simply because the neighbor prince is obsessed with Lasva, the beautiful sister of the Colend’s Queen. But two other admirers of Lasva are fortunately at hand, and in their own different ways work to forestall the plans of the neighboring prince.

Sherwood Smith's "Beauty" is a next-generation sequel to her wonderful Crown Duel, as an self-conscious young princess is kidnapped by a revived villain from that novel, and learns something about inner beauty and inner strength, and redemption.

A particular highlight is Sherwood Smith’s novella “The Rule of Engagement”, in which a woman is kidnapped by a man who hopes to marry her, and must find a way to engineer her escape without causing political issues, or harm to the man’s retainers. The story is satisfying in its scope, and hints at a fascinating backstory … all part of a grand fantastical history that Smith has been elaborating since childhood, and which is the source of her excellent Inda novels for DAW.