Birthday Review: I Capture the Castle, by Dodie Smith

I Capture the Castle, by Dodie Smith

Dodie Smith was born May 3, 1896, and she died aged 94 in 1990. She is one of those writers known nowadays for only a small subset of her oeuvre -- two books, the children's novel The Hundred and One Dalmatians, and the adult novel I Capture the Castle. But she wrote several other novels, about a dozen plays, and four volumes of autobiography. She was also an actor early in her life. Her other novels and her plays seem mostly forgotten nowadays, as I note, but they must have been fairly successful, in that several of them were filmed. Even I Capture the Castle was for a long time, it seems to me, eclipsed by The Hundred and One Dalmatians, but sometime in the last few decades it was enthusiastically rediscovered -- or re-emphasized. (And perhaps I am merely reflecting my experience.) Here's what I wrote about I Capture the Castle around the time the movie based on it appeared, in 2003. 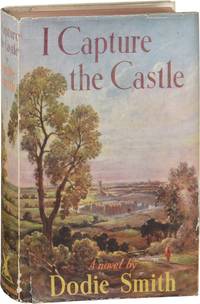 I first heard of I Capture the Castle several years ago, and immediately formed the idea I might like it. I had at the time read The Hundred and One Dalmatians, Dodie Smith's most famous story -- and altogether a slier and smarter story than the Disney version. (Though at least the first Disney version, the animated one, is really a pretty darn good film.) I had no idea she had written anything else. It turns out Smith was a quite prolific and apparently rather popular playwright in England in the 30s. She moved to the US at the outbreak of war because her husband was a pacifist. I Capture the Castle appeared in 1948, The Hundred and One Dalmatians a bit later. There was a sequel to The Hundred and One Dalmatians called The Starlight Barking -- a terrible book.

I picked up a copy of I Capture the Castle real cheap at a used book sale, feeling pretty proud of myself for having found a not very available book. Of course, shortly thereafter it was reprinted in trade paperback -- I think more in reaction to the new live action version of The Hundred and One Dalmatians than anything. Last year a film was made of the book. Not long ago my wife was looking desperately for reading material and I dug up I Capture the Castle and suggested it to her. She read it and quite liked it, and I went ahead and read it, at long last, after she finished. Then this past weekend we rented the film and watched it.

The book is purely delightful. It opens with 17 year old Cassandra Mortmain starting a diary: "I write this sitting in the kitchen sink." Cassandra lives with her eccentric father, her stepmother Topaz, and her older sister Rose and younger brother Thomas in a dilapidated castle. Her father had rented the castle several years previously, after getting out of prison. (He had attacked his wife with a cake knife, perhaps not seriously, but a neighbour intervened and got hurt -- so the isolation of the castle appealed.) At that time the family was still flush, after her father's success with an odd book called Jacob Wrestling. But by the time of this book, they are living in grinding poverty. The children's mother is dead, though Mortmain has married again, and Topaz, a beautiful woman, much younger than her husband, still earns an occasional amount modeling. Very small royalties for the book sometimes come in. But Mortmain is blocked on any new book, and spends his time reading detective stories. Cassandra is out of school. The beautiful Rose is frustrated by poverty and determines either to "go on the streets" or at least marry a rich man. While Cassandra fends off the clumsy but honest advances of their strikingly handsome servant boy, Stephen, who is in the habit of presenting her poetry copied from famous poets as love poems.

The main actions starts when the new owners of the castle, and of the nearby estate Scoatney, turn up. They are two American men, Simon and Neil Cotton. Simon, the elder, has a beard, which makes him suspicious, but soon Rose determines to marry him. Neil is bound to return to America, and is very suspicious of the sisters' apparent golddigging. Further complications occur when their mother takes an interest in the elder Mortmain, much to Topaz' distress, while a cousin, Mrs. Fox-Cotton, determines to photograph Stephen, and perhaps to seduce him.

Well, as they say, much hilarity ensues, along with a certain amount of pain for all concerned. There are some twists and surprises (at least to me -- perhaps I was naive), leading to a satisfying if somewhat open ending. It's great fun, in large part because of Cassandra's voice, very bright, funny, a bit naive, sweet. It's a romantic book with a light tone, but it maintains just enough ambiguity and edge to avoid treacle. The characters are quite nicely drawn -- at least the women. I don't actually think any of the men come off (except for the Vicar, in a very small part). Simon and Neil and Mortmain are all really only sketches. and Stephen is perhaps more than that but not convincing. However, the women are much better -- Cassandra is lovely, Rose is convincingly not such a wonderful person without being horrible, and Topaz is odd but quite sympathetic.

Well -- what about the movie? Sad to say, it doesn't really come off at all. For the most part the movie is pretty faithful to the bare bones of the plot -- but that's not enough. The humor of the book is almost wholly lost. Cassandra's voice just doesn't survive. The very fine closing lines are altered, much to their diminishing. Rose's character is coarsened just a bit. Topaz is completely muffed -- she is turned into a grotesque. Stephen's role is diminished, which makes some things seem a bit confusing. Bill Nighy plays Mortmain, and he does a fine job, but doesn't quite capture the Mortmain of the book -- still, he's one of the better parts of the movie. All sorts of little things are just a bit off -- for instance, the Vicar is played by the guy who played Mr. Collins in the recent Pride and Prejudice miniseries, and he plays him (in just a bit part -- reduced from the book, understandably given time limitations) as another Mr. Collins, which isn't right AT ALL.

To some extent, this is a bit unfair -- expecting the movie to be a book adaptation. Rather, one should evaluate the movie on its own merits. I suspect it still falls short -- for instance, it's not really very funny, and I think that would have been nice -- but I admit I may not be evaluating it as independently of the book as I should. But there you go.
Posted by Rich Horton at 5:28 AM