Birthday Review: The Ghost Brigades and The Lost Colony, by John Scalzi

Today is John Scalzi's birthday -- he reaches his half century. He doesn't write a ton of short fiction, so I've not reviewed him all that much in Locus. But I did write about the second and third volumes of his Old Man's War trilogy at my blog back when they appeared, so I figured I'd resurrect those reviews now, in his honor.

I also reviewed The Collapsing Empire here, last year as part of my series of Hugo nominee reviews.

The Ghost Brigades, by John Scalzi 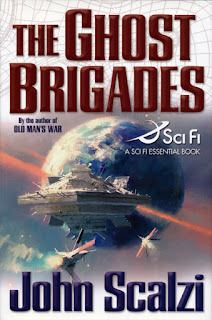 John Scalzi won last year's Campbell Award for Best New Writer, and his first novel with a major publisher, Old Man's War, was on the Hugo ballot. That novel told of human colonies in a hostile galaxy, whose army consists of old people who have agreed to serve in the military in exchange for a new body. The backstory of that novel hinted at a complex political situation involving the many alien races the humans share the galaxy with. His 2006 novel, The Ghost Brigades, addresses that situation a bit more.

The title refers to the Special Forces branch of the Colonial Defense Forces. These are particularly enhanced soldiers, cloned from soldiers who didn't survive the period between agreeing to serve in the CDF and getting transferred to their new body. They have special abilities, most particularly a quasi-telepathic link with other members of their unit. But they are for the most part secret. In Old Man's War we met one Ghost Brigade soldier, Jane Sagan. (These soldiers are given names derived from famous scientists.)

In this novel a plot is uncovered: three alien races, the Rraey, the Obin, and the Enesha, have agreed to unite against humanity. And one human, Charles Boutin, a brilliant scientist, has turned traitor after the death of his daughter. Boutin's expertise is consciousness transfer. The CDF have a copy of his consciousness, and they transfer it into a clone of his body, hoping to find out what made Boutin go bad. But the transfer doesn't take (at first), and the clone, called Jared Dirac, becomes a regular Special Forces member.

He joins Jane Sagan's unit, and eventually participates in key actions, such as a mission against the Eneshans, in which his unit commits atrocities in order to convince the Eneshans to abandon their alliance against humans. This stress begins to recall his Boutin memories, and he is set on a path leading inevitably to the real Charles Boutin, and to some wrenching revelations about galactic politics, and about human interactions with aliens.

It is once again a lot of fun. There are weaknesses -- some excessive implausibilities in the plot most particularly. And I am not entirely convinced by the characterization of the Special Forces members (though Scalzi does try ...). But it's pretty good overall, and I did like the increased moral complexity of this future as described here. Not a great novel, but a nice fun novel with a bit of a deeper side. There are some nice ideas, some good thinking about such things as the importance of consciousness, and plenty of sharp and funny writing.

The Last Colony, by John Scalzi 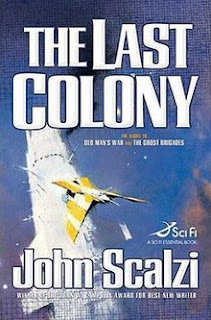 The Last Colony is a nominee for the Hugo this year. It's John Scalzi's third book in his Old Man's War series -- and he intends it to close the series, and indeed it does finish the narrative arc well, answering the questions raised in the earlier books and coming to an satisfying and surprising conclusion. [I should note that he eventually added three more novels in this milieu.] And it's pretty enjoyable, though I wouldn't say it's worthy of the Hugo.

As the story opens, John Perry and Jane Sagan, now married and returned to normal human bodies, are living on a quiet colonial world, as local ombudsman and police chief respectively. But they get an offer from the Colonial Defense Forces and the Colonial Union -- to lead a new colony, an experimental colony. Unlike previous colonies, with colonists recruited entirely from Earth's poorer countries, this one will be composed of people from 10 well established human colony planets. This seems likely to be a political mess, dealing with 10 different groups with different goals. Not to mention the potential dangers on the planet (which turn out to include an unexpected intelligent species). But ... that's hardly even the least of Perry and Sagan's problems.

Revealing any of the twists -- and there are several -- might be unfair, so I won't. But Scalzi is concerned with helping to show us the real place of humanity in this very hostile universe, the real motivations of the Colonial Union (humanity's space based government), and a potential (however slim) for something like peace between the various alien species. Given the starting point, the ending point of the book is hard to see -- and to be honest I think the plot developments, while interesting and clever, are a bit farfetched. (Suffice it to say that Scalzi manages to make the extermination of humanity the most likely future.)

Anyway, it's a fun book, and a pretty thoughtful one, though there's a bit of deck stacking going on here and there. It's certainly not a humanity uber alles book. I thought the characterization a bit thin -- most everyone talks just about the same. And though Jane is a major character and is present almost throughout the book, somehow she almost doesn't seem to be there, and her relationship with John, that I thought worked well in the other books, comes off as almost an afterthought. Bottom line: good, not great, but quite well done in the sense of fairly resolving the series.