Well, especially for those who have read my previous Hugo reviews this year, let’s cut right to the chase. I enjoyed The Collapsing Empire – it’s a fun book with an intriguing central premise and characters I liked to follow, and some nice action. But it’s not a great book – I don’t think it one of the ten or so best novels of the year. (It’s in the next tranche, along with the other books I reviewed to date (Raven Stratagem excepted – that’s a notch higher).)  There’s no shame in that – Scalzi is a reliably enjoyable writer, and this book is no exception.

I might add that the of the four novels I’ve read from the ballot so far, three are Space Opera by my definition (The Collapsing Empire, Raven Stratagem, and Provenance), and the other (Six Wakes) is also set on a spaceship decades from Earth, though I wouldn’t quite call it Space Opera.. Indeed, we seem to be in something of a Golden Age – or perhaps Silver Age – of Space Opera – the Philip K. Dick Award shortlist included another couple of Space Operas: Alastair Reynolds’ Revenger and Tim Pratt’s The Wrong Stars (with Martha Wells’ All Systems Red sort of Space Opera-adjacent). (No Space Opera on the Nebula shortlist, though!)

(Neither of the two books I have yet to read from the Hugo Ballot are Space Opera, however.) 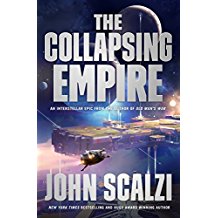 The Collapsing Empire is set in a future interstellar human society, the Interdependency, in which the inhabited planets are linked by “the Flow” – that is, the familiar wormhole-type shortcuts between star systems. But, we soon learn, the Flow is beginning to collapse. (Hence the title!)

The story follows three people primarily. Cardenia Wu-Patrick is the new Emperox of the Interdependency, as her father dies at the beginning of the book. She has a few problems – she’s inexperienced (even more so than most new Emperoxes (Emperoxi? Emperoux?), she needs to consider marriage and the most politically advantageous men and women candidates are assholes, and, of course, as she soon hears, the Flow might be collapsing. But, luckily, she has the memories and simulated personalities of all the previous 86 Emperoxes to consult.

Kiva Lagos is a noblewoman acting as Owner’s Representative for the House of Lagos as they deliver a shipment of fruit to End, the most isolated of the Interdepency’s planets – at least with the current configuration of the Flow. However, End is undergoing a revolution, and Kiva’s shipment is impounded – obviously on the orders of the Duke, who is actually being advised by a member of the family of assholes Cardenia is dealing with.

The third POV character is Marce Claremont. He’s a Professor of Astronomy on End, stuck there because his father discovered evidence that the Flow was likely to collapse, which got him ennobled – and more or less exile to End. Now that it’s truly clear that the Flow is ending, the Count decides to sends his son back to the ruling planet to advise the new Emperox – but this is not easy because of the political situation on End.

What follows is, really, mostly setup for the following books in this series. And not bad setup – not bad at all. I’ll certainly be reading the rest of the series. This book features lots of action – assassination attempts on Cardenia, derring do in sneaking Marce onto a starship, and plenty of peril on the starship itself, and a whole lot of twisty and nasty political maneuvering. Fine fun work. And the rest of the series has a chance to be even better. This book isn’t bad at all, but it’s not, in my view, Hugo-worthy. (For one thing, fun as it is, it doesn’t really do anything new. That’s not exactly a complaint – it’s a nice variation on a number of familiar themes. But for a Hugo I would like a bit more.)