At long last, a return to the original subject of this blog -- popular novels of the early part of the 20th Century. This one probably wasn't a true bestseller, but it sold quite well, and also eventually got a TV adaptation.

Neil Munro (1863-1930) was a Scottish journalist, novelist, and poet. He was the illegitimate son of Ann Munro, a kitchen maid. (Some say his father was of the aristocratic Argyll family, which turns up in this novel.) His early career was as a journalist, and later in life he became editor of the Glasgow Evening News. Three series of humorous short stories were written for the Evening News, and arguably he remains most famous now for those. But his early novels were mostly historical novels, and later novels were serious contemporary novels. All these pieces were on Scottish subjects. He was friends with such significant Scottish writers as J. M. Barrie and John Buchan, and was spoken of as an heir to Walter Scott and Robert Louis Stevenson. However, his novels have mostly been forgotten, though Doom Castle was dramatized by the BBC in 1980. 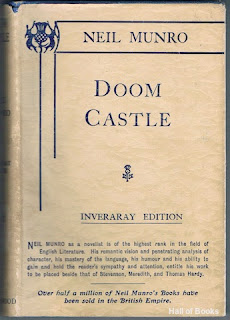 Doom Castle was first published in 1901, by Wm. Blackwood and Sons. My edition, also from Blackwood in 1948, is part of a posthumous reissue of many of his books, called the Inveraray Edition after his place of birth.

The story is set some 10 years after the Jacobite Rising of 1745. Victor, Comte de Montaiglon, has come to Scotland on something of a private mission, looking for a man named Drimdarroch, who betrayed a woman Victor thought he loved, leading perhaps to her death. (Many of the Scots supporters of Bonnie Prince Charlie had spent time in France.) He fetches up at the somewhat dilapidated Doom Castle after being chased by some local bandits, and he encounters the Baron of Doom Castle, as well as his rather comical servant Mungo Boyd.

The Baron confesses no knowledge of the man Victor seeks, but offers his hospitality, such as it is. Doom Castle has fallen on hard times, partly because of a neighbor's predatory lawsuit. And there are mysteries -- such as who occupies the second floor -- and who is signalling from outside, playing a tune on a flageolet, to a woman (one presumes) in the castle, whom Victor is not allowed to meet.

The opening to the novel is quite slow, but things pick up once Munro has set up all his wickets and starts to knock them down. There is another encounter with the bandits, who invade the castle -- Count Victor managing to wound one of them. Victor finally manages to meet the lady of the Castle -- the Baron's daughter Olivia, and of course falls head over heels in love. But she, it seems clear, is in love with the mysterious flageolet player. Victor heads to Glasgow, still looking for "Drimdarroch", and is invited to the house of the Duke of Argyll, a good man, and there encounters his well-respected Chamberlain, Simon MacTaggart. Also there is a slimy lawyer, and his wife, who seems to be in love with MacTaggart, who has a reputation as one who likes the ladies.

We can see the shape of things coming clear. And Count Victor may be in more danger than he realizes. He also may be in better shape with Olivia than he knew. But his suspicions of the Baron are increasing -- putting him in a bad spot with regard to his conscience vs. his love for Olivia. Then the Count realizes who has been trifling with Olivia, and fights a duel, soon to be imprisoned -- suspected of murder as a result of the duel (but anyway the victim lived) -- so we are vouchsafed an escape attempt, and a meeting with a virtuous older woman ...

After the slow beginning, I thought this was a pretty fun romantic historical novel. Its serious subject -- a minor part of this particular book -- is the conflict between the Scottish lowlanders (and their rapprochement with the English) and the highlanders. But the heart of the novel is the love story, and the way Victor's original mission -- almost unimportant to him by now -- is solved along with the resolution of his new ambition. I would say Munro still deserves to be read, though he will probably never again have a significant reputation.
Posted by Rich Horton at 6:54 PM