Today was a day featuring two birthdays of very fine SF writers, who have done excellent short fiction, both of whom I consider friends. I've already discussed Daryl Gregory, so here's a selection fo my reviews of the work of James Van Pelt.

Talebones for Spring 2002 has two very solid SF stories, both about crime and punishment.  William Barton's "Right to Life" is a satirical look at a man facing the executioner in a crowded future in which the state happily takes any excuse to exercise the death penalty.  James Van Pelt's "Its Hour Come Round" is a strong look at a vile criminal in the process of rehabilitation, this accomplished using "empathy treatments" and various drugs.

Van Pelt also contributes the strongest story in a somewhat disappointing September Analog: "Far From the Emerald Isle" tells of a curious discovery on board an STL starship: cute, but minor.

James Van Pelt's "The Long Way Home" (Asimov's, September) is an affecting story about a desperate attempt to launch a starship as a war destroys civilization -- and the aftermath.

In the December Asimov's, James Van Pelt's "Echoing" intertwines three stories: a truck driver trying to get home in a Christmas snowstorm, a teenaged girl contemplating suicide during her parents' Christmas party, and a starship captain lost in the tangles of [M]-space. The stories are involving enough, but I thought the forced correspondences a bit strained.

James Van Pelt's "The Inn at Mount Either" is the prize story this month, however. The title inn has a unique property – it is built on a sort of nexus between alternate worlds, and one can walk to different versions of the hotel. But Daniel has a problem – he can't find his wife. Then he compounds the problem by going to look for her ... It's not precisely a new idea, but Van Pelt puts a nice spin on it.

Review of The Last of the O-Forms and Other Stories (Locus, July 2005) 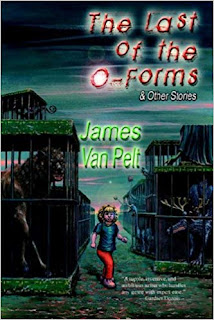 Some writers are short story writers, some are novelists. And the plain fact is that it is novelists who gain more attention. If anything the situation is worse today than some decades ago, when writers like Robert Sheckley and Harlan Ellison could establish reputations mostly on the basis of short fiction: aided by mass market short story collections. Nowadays short story collections are mostly relegated to the small press. (Perhaps in compensation, it seems in some ways easier to get a short story collection into print – if harder to get it seen by a wide audience.) So it behooves us to take a look at what is coming from the smaller publishers.

One of the SF field's best new short fiction writers is James Van Pelt. His stories appear regularly in Analog, Asimov's, Realms of Fantasy, and elsewhere – strong work in the tradition of what one might call "consolidators". These are writers like Robert Silverberg and Robert Reed (to name very prominent examples from different generations) who don't make names with splashy ideas or as leaders of "movements", but who write well-crafted stories based on careful insight into established SFnal ideas. Noticeable in Van Pelt's stories is the focus on the feelings of ordinary people in situations that are mostly ordinary to them – if strange to us.

Van Pelt's first collection, Strangers and Beggars, appeared two years ago from Fairwood Press (the small press responsible for the fine magazine Talebones). The Last of the O-Forms & Other Stories is his second, and a stronger book. [I should add that Van Pelt does have a couple of novels to his credit as well, by now.]

The title story is one of his best known pieces, a Nebula nominee, about a future in which nothing seems to breed true – neither animals nor humans. A man travels with a "circus" including a two-year-old advertised as "The Last of the O[riginal]-Forms". She isn't, of course, and the reactions to her are heartbreaking. Another strong story closes the book, "A Flock of Birds", a striking story about human extinction, beautifully contrasted with other extinction events.

Other intriguing stories include "Its Hour Come Round" , a look at a vile criminal being rehabilitated by "empathy treatments" and various drugs. "The Long Way Home" is an affecting story about a desperate attempt to launch a starship as a war destroys civilization -- and the aftermath. "The Pair-a-Duce Comet Casino All-Sol Poker Championships" rather belies its light-seeming title: telling of a rich man's cloned copy, a young man working for him, and a space disaster. "A Wow Finish" is a time travel story and love story, set at the opening night of Casablanca – sweet and affecting.

Regular SF readers may have missed two stories that come from Alfred Hitchcock's Mystery Magazine – both are fantasy, though with sufficient mystery elements to appeal to that audience. "The Sound of One Foot Dancing" is ghost story featuring Fred Astaire and an aspiring young dancer, in the shadow of World War II. "Once They Were Monarchs" begins as a straightforward story of a lifeguard concerned about a creepy boy who may be abusing younger girls, but slowly reveals a surprising and effective secret about its protagonist and its villain.

Talebones for Summer is another decent issue. Perhaps James Van Pelt’s “One Day, in the Middle of the Night” is best, a clever recasting of a cute poem into a dark tale of sibling rivalry aboard a starship.

Also moving but just slightly forced in the October-November Asimov's is James Van Pelt’s “The Small Astral Object Genius”, which has a pretty cool idea at its center. Dustin is a teenager who plays with a sort of fad toy that might have real scientific value. It’s a small sphere, called a “Peek-a-Boo”, which can be sent thousands of light years away, take a picture, and return. Most of the pictures will be of empty space, but every so often one can capture an image of an interesting object: a nebula or a star or even a planet. Dustin is a particularly interested in small objects like planets, and he obsessively sends his Peek-a-Boo in search of pictures. Partly, however, this is to escape the discord caused by his parents’ failing marriage. Then he makes a remarkable discovery. All this is interesting enough, but I thought the ending unconvincing, a bit manipulative.

James Van Pelt’s “Rock House” (Talebones, Spring) is modeled on Poe’s “Fall of the House of Usher”, and it is excellent work. The narrator visits his long lost friend and the friend’s sister, who live together, rather creepily, in a house carved out of rock. The narrator is tempted to join the siblings in their strange quest, tied to the seemingly living but not living title house.

Talebones for Winter leads off with a fine James Van Pelt story, “Floaters”, in which a man dying of an AIDS-like disease is enlisted into a secret project to observe the future – an observation which, alas, reveals that the world will end in just a few years. Van Pelt deals with the implications both logically and emotionally effectively.

The best story at Analog for June comes from James Van Pelt. In “Solace” he intertwines the story of a man trying to survive a bitter winter at an Old West mine with that of a woman trying to remember Earth on a starship – quiet and moving work, in Van Pelt’s most familiar mode.

It's not fair, really, to, in contrast, suggest that James Van Pelt's “The Family Rocket” (Asimov's, January) isn't “engaged” with the future. Indeed perhaps its theme, regret at the loss of the dream of space travel, might be regarded as quite directly engaging with our present future. But that very theme is central to what I call “Where's my Flying Car” SF – SF that explicitly discusses the way we have failed to live up to old SF dreams. “The Family Rocket” is a character-centric story in which a young man brings his girlfriend to his family home – his father's junkyard – embarrassed by his father's old stories of building a rocket from the junk he has collected. And of course he is pushed to a more sympathetic view of his father's dreams – in a quite moving story. (The kicker, to be sure, is that in this particular future space travel, travel even to Mars, is a reality, if one reserved mostly to the rich.)

Two stories in December by Analog regulars are also worth particular notice. James Van Pelt’s “The Continuing Saga of Tom Corbett: Space Cadet” is about a girl named Tomika Corbett who discovers the old Tom Corbett juvies and becomes fascinated by space. She desperately wants a career in space, and is even more motivated, in the long run, by her inevitable Space Cadet nickname, and by the resistance of teachers who disparage the old Tom Corbett book (which really were quite awful, to contemporary eyes, as I recently learned when I read one). She begins to dream of aliens coming to take her away – and she tentatively befriends another bullied kid, even smarter than her – which gives her a tough choice when – in her dreams (?) – the aliens really come. I thought this story striking for the way in which what seems old-fashioned wish-fulfillment is revealed to be a terribly sad meditation on the contemporary loss of the dream of the future we once seemed to share.

Last month I noted the tendency of non-genre writers to use SFnal tropes in the service of fairly traditional mainstream ideas. And this month I’m looking at a classic “little magazine”, Stonecoast Review, which features a couple of very fine stories by SF writers – indeed, by writers known for writing fairly traditional SF. And, really, both writers are, in these cases, using SFnal tropes in the service of fairly traditional mainstream ideas. (Indeed, this has always been a thing – and not a bad thing either.) James Van Pelt’s “Mambo No. M51” is about Emma Sophia, whom we soon learn has been voted “sexiest pop artist of the year”, as well as (by the protagonist) potentially “nuttiest”. The story, told by a man helping with the tech for her newest video, concerns her fascination with the literal “music of the stars” (radio telescope recordings) and her desire to lose herself in a video presentation of space while listening to her interpretation of the stars’ music; and the protagonist’s increasing involvement with that obsession (obviously driven in part by his somewhat sublimated sexual attraction to her). It’s pretty effective work, both as a character study and as a presentation of scientific wonder.

In the March-April Analog there is a good solid story from James Van Pelt, “Second Quarter and Counting”, told from the POV of a 70-year-old woman, whose long-time best friend is undergoing a treatment called “Backspin”, which revitalizes people so that they are physically – and mostly mentally – 20 again. But there is a risk that the mental changes will be more complete – perhaps personality change? Or amnesia? The protagonist, a swimmer, remains in very good shape for her age – should she consider the same treatment? Or will she lose who she is? It’s a very sober examination, and a strongly character based piece, not particularly slanted to make a point on either side of the debate.