Adam Roberts turns 54 today. He is one of the most consistly interesting and original SF writers, and also a remarkably perceptive (and also very snarky on occasion) critic. Here, then, is a selection of my Locus reviews of his short fiction.

Sci Fiction for April and May features several fine stories, and two outstanding ones. One of the more interesting is Adam Roberts' "Swiftly", which is an alternate history of sorts, extrapolating from Jonathan Swift's Gulliver's Travels to a mid-19th Century in which the various "Pacifican" species, such as Lilliputians and Brobdingnagians, are being exploited by humans. The story tells of an English agitator for Pacifican rights, and the turn in the war between England and France that occurs when the French gain the alliance of the Brobdingnagians.

Spectrum SF #9 is finally out, dated November 2002. Adam Roberts's novella "The Imperial Army" rather cynically examines a Galactic Empire at war with an implacable, incomprehensible, alien species. The cliché ideas, and some SF in-jokes, signal that the main purpose is to send up certain SFnal assumptions. 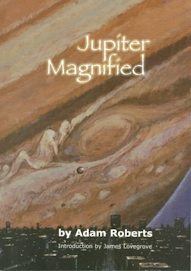 PS Publishing continues to release interesting long novellas in book form. Two fine entries from 2003 are Adam Roberts's Jupiter Magnified and Robert Freeman Wexler's In Springdale Town. The SFnal event at the center of Roberts's story is Jupiter suddenly looming hugely in Earth's skies. The narrator is a Swedish poet, once regarded as very promising, but who has been blocked for some time. As you might expect, this is an overtly "literary" story, complete with a selection of Stina's poems at the end. I was interested but in the end not quite captivated.

Another fascinating story about an unexpectedly ordered sky is Adam Roberts's "The Order of Things", in which humanity is engaged on a great project to reshape the coastlines of the world into geometrically regular forms. And it seems that the sky itself is just as orderly: the stars arranged in a regular grid. The story concerns a stodgy coastal engineer and his radical brother, along the way hinting at the dark background of this society.

Elemental is an anthology from Tor supporting a very worthy cause: Tsunami relief. Alas the stories as a whole aren’t terribly impressive. I did like Adam Roberts’s “And Tomorrow and”, a reimagining of Macbeth assuming you take the witch’s promise to him a bit more literally. There are quite a few more decent stories here, but none that thrilled me.

I thought the best story was the last, Adam Roberts’s “Me-Topia”. It starts a bit slowly, but justifies all by the end. A spaceship crewed by future neanderthals lands on an impossible planet outside of the Solar System’s ecliptic. They find breathable air, and 1 g of gravity, and eventually a curiously familiar geography. And then a representative of long-gone homo sapiens, who claims to own this odd planet and who doesn’t want guests. Roberts’ gives all this weirdness an effective SFnal explanation, and brings his story to a gripping conclusion.

Celebration is published to celebrate the 50th anniversary of the British Science Fiction Association, and it is an excellent anthology. Two stories in particular stand out. ... Adam Roberts is extremely fond of riffing on old SF. For example his recent novels Splinter and Swiftly are respectively based on Jules Verne’s To the Sun/Off on a Comet and Jonathan Swift’s Gulliver’s Travels. “The Man of the Strong Arm” is another example. Set in a male-dominated, oppressed future, it tells of a man who resurrects old texts – including science fiction, such as a tale by Edgar Burroughs of Rice, about a man willing himself to a red star. Or a tale about “Armstrong”, who rides the gods Saturn and Apollo to the Moon. The story turns on his rather humorous interpretations of the old texts (always attempting to make them support the leader’s ego), and then on an intervention by a free group of women.

Adam Roberts’s “A Prison Sentence of One Thousand Years” is a quietly powerful story from the Winter Postscripts. A man just released from such a punishment tells his story, in so telling slowly revealing his disconnection from his society, and the reason for his sentence.

“Anhedonia”, by Adam Roberts (The Mammoth Book of Mindblowing SF), is excellent. Aliens have come to us offering technological wonders including star travel. A group of humans on Mars is trying to learn the aliens’ secrets, and is finding the process frustrating. In particular, they have been altered so as not to feel emotion. Sense of wonder – a key root of the desire to explore – is after emotional at base – can we only travel to the stars by losing the desire to travel? Roberts goes beyond just asking that question – he comes to a legitimately mindblowing explanation.

One of the non space-oriented stories in Reach for Infinity is “Trademark Bugs: A Legal History”, by Adam Roberts, which like Castro's “The New Provisions” is a satire on corporate rapacity, and which also perhaps overplays its hand. And which also is ghoulishly entertaining. Here pharmaceutical companies find themselves too successful for their own good: they've managed to pretty much cure everything, so there's no more need for new drugs. Their solution is to engineer new diseases, which then will require new pharmaceutical treatments. The story follows the legal challenges to aspects of this situation, and how ultimately the entire social order is changed as a result.

Adam Roberts is at his very best in “Thing and Sick” (Solaris Rising3). This is set in the Antarctic in the 1980s. The narrator is a rather normal young scientist or technician, spending his time reading SF, drinking beer, playing the contemporary movies they have on VHS, and looking forward the the odd letter from his girlfriend. His companion is a bit odder – his only reading is philosophy (Kant's Critique of Pure Reason), he doesn't get letters, and he's convinced their job (to set up a radio telescope as part of the SETI project) is a waste – the answer to the Fermi Paradox can be found in Kant. And part of the answer is that the aliens are all around us, and we just can't perceive them. And – perhaps – they are not friendly. The result is scary, and in a way funny, and ambiguous and thought-provoking. SF about philosophy!

The best piece in Crises and Conflicts is Adam Roberts’ “Between Nine and Eleven”, about the war between Human Space and the alien Trefoil. The humans are winning, but then the Trefoil come up with a terrifying weapon based on a rather Eganesque concept: changing the underlying mathematics of space. This story tells of the first human ship to encounter the Trefoil weapon, and their fortunate escape. It’s slyly told, perhaps not entirely serious but still managing to be scary as well as clever.
Posted by Rich Horton at 1:11 PM