The great Joe Haldeman, SFWA Grand Master, winner of multiple Hugos and Nebulas and too many other awards for me to count, turns 76 today. I haven't seen a novel since 2014s Work Done for Hire, so I don't know how much more we're going to get from him, but his career as it stands is remarkable. This is a review I wrote for my blog back in 2007 of his novel The Accidental Time Machine, the last in a quite remarkable late career run of singleton novels that (to my eye) began with The Coming (2000).

Joe Haldeman has, somewhat quietly, become one of my favorite writers, for sheer reliability. It's not that I didn't highly respect him before -- I liked The Forever War a great deal, loved The Hemingway Hoax, and liked many of his short stories. But he wasn't a writer I would buy on sight. And then he went through a period where he just didn't interest me -- the novels Forever Peace, 1968, and Forever Free in particular -- fairly recent work -- simply did not appeal based on reviews. But beginning, as I recall, with The Coming (2000), I have read all his stuff, at about 18 month intervals. The Coming was followed by Guardian, Camouflage, Old Twentieth, and now The Accidental Time Machine. Each of these novels has been fairly short, quite different from its predecessors, compulsively readable, built around nice SFnal ideas (if usually familiar ones), well characterized, and philosophically interesting. Haldeman does sometimes have problems with endings -- the conclusion of Guardian in particular is a mess -- but without exception his novels are great fun to read, even if the ending is a bit rushed or a bit perfunctory. (Sometimes the endings aren't the point -- The Coming, for example, has a mild surprise ending that could be a letdown if you were expecting some dramatic transcendent revelation -- and clearly was a letdown to many readers -- but I think it is just what he planned, and it caps the novel he meant to write quite well.) Quite simply, Haldeman's novels are among those I most look forward to in complete confidence I will enjoy them. 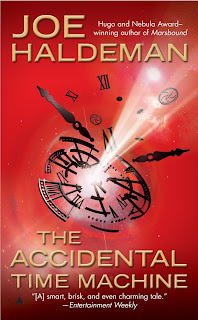 The Accidental Time Machine is, in this sense, quite of a piece with its fellows. It deals with a somewhat familiar idea -- a time machine that only goes forward. The ur-narrative here, really, is Wells' The Time Machine, but this story reminded me more urgently of Poul Anderson's pulpy classic "Flight to Forever". But with plenty of original Haldeman touches. For one thing, this is his "MIT novel", just as The Coming was his "Gainesville novel". (Haldeman splits his years between MIT and Gainesville, FL.) And, as his afterword notes, Haldeman stumbled on a bafflegab explanation for his protagonist's time travel that turns out to have at least some physical plausibility.

Matt Fuller is a post-grad working on a graviton detector. He has just been dumped by his girlfriend, as it turns out for a rival post-grad. One day he notices that his machine seems to disappear briefly, then reappear. Rather quickly (perhaps too quickly) he figures out that it disappears for exponentially increasing times, and that anything within a Faraday cage attached to the machine goes with it. He assumes that the machine is traveling in time -- and, it turns out, fairly predictably in distance as well. He ends up deciding to go along with the machine -- with disastrous consequences, as he is soon detained on suspicion of murder. His only escape is farther into the future.

So we have a bit of a travelogue to varying futures, most notably one in which the Eastern US is under the rule of an oppressive theocracy. There he picks up a companion, a pretty and innocent young woman. He has some hope -- hints that he must have eventually returned to his own time, as well as contact with an AI interested in travel to the very far future indeed. The resolution is quite nice, not exactly expected but not unexpected either. The SFnal content throughout is involving, if never coruscatingly brilliant. Just intelligent, thoughtful, and entertaining. Again, a novel that I thoroughly enjoyed.