Richard Powers turns 62 today. He's been a big name in contemporary literature for some three decades now, and he remains at the top, more or less, having won the Pulitzer Prize for his most recent novel, The Overstory. Here's a long blog post I wrote a couple of decades ago about one of his first novels. 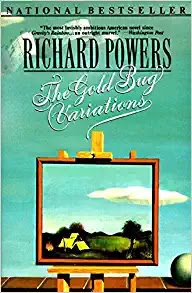 This book had been close to the top of my TBR list for an inordinate amount of time. I thought the book sounded interesting from reviews back it first came out (1991). Later on Glen Engel-Cox praised it extravagantly, and it started showing up on my Alexlit recommendation list as well.
Two weeks ago [quite a while back] I finally tackled it.  Not the most auspicious time, in some ways: I've been working extra hours, and my reading time has been somewhat curtailed.  Perhaps partly as a consequence, the book started slowly -- or at any rate my reading started slowly -- but somewhere about halfway in it became wholly absorbing, and in the final analysis it's a wonderful book, intellectually involving, emotionally wrenching, well-constructed, and deeply moving.

The book is told in three separate tracks. We open with Jan O'Deigh, a research librarian in Brooklyn, receiving a postcard from her ex-lover, Franklin Todd, telling her that their close mutual friend, Dr. Stuart Ressler, has just died. Jan responds by quitting her job, and spending the next year or so trying to learn enough about genetics to understand Dr. Ressler's work. She narrates an account of that year, interspersed with a report or two from Frank Todd, who seems to be in Europe, researching his long-delayed dissertaion on the obscure Flemish painter Herri met Bles.  All the time she  is apparently trying to work out how to find Franker, and (we suppose) rekindle their relationship.  Jan also tells us of the events of a couple of years previously, when she met Dr. Ressler at the library, then, by coincidence, Franklin.  Franklin asks her to research a question: for what was Stuart Ressler briefly well-known?  For Dr. Ressler, now Frank's coworker on the night shift at a dataprocessing firm, has a mysterious past as an important scientist. Todd wants to know why Dr. Ressler abandoned his position to do, essentially, scutwork. Jan finds a bit of the story: a Life magazine profile from 1958 highlights Dr. Stuart Ressler as one of the young scientists on the track of the way DNA encodes genetic information.

So, two tracks are Jan in the "present" (1985), and Jan, Stuart, and Franklin in the near past (1983). Jan becomes fascinated with Franklin, and with Dr. Ressler, and begins visiting them while they are working. (There night shift job is rather relaxed in nature, most of the time.)  She falls in love with Todd, eventually pushing herself to break off her longterm relationship with an advertising man, Keith Tuckwell. And she and Frank, among other things, probe at the secretive Dr. Ressler about his past.

The third narrative track, in third person, follows Stuart Ressler, back in 1957-1958, as he comes to the University of Illinois at Champaign-Urbana (my school!) to accept a research fellowship and join a multi-disciplinary team trying to figure out the way the four DNA bases encode genetic information. The various members of the team are presented at first as brilliant scientists. Karl Ulrich is the somewhat remote and driving leader. Toveh Botkin is an older woman, a refugee from the Nazis, who befriends Stuart and teaches the tonedeaf man about music.  Tooney Blake is a intellectually exciting man, a neighbor of Stuart's, who with his wife and precocious child are the first people to really try to draw Dr. Ressler out socially.  Joe Lovering is a natural at the new field of computer programming. And Dan Woytowich is a news-obssessed man (reminding me of Sturgeon's MacLyle, from "... and Now the News") whose wife is struggling to have a baby after a couple of miscarriages. Most important to the story, though, is Jeannette Koss, a couple of years older than Stuart, married to a food engineer.

Stuart falls in love with Jeannette, and she with him, obssessively. At the same time, he begins to work out some ideas which might lead to cracking the DNA code -- but Dr. Ulrich is skeptical, and the team fractures, with Ressler and Koss and Botkin on one side, and the other three pursuing a dead end (as we are given to know). Tooney Blake, who could have held the team together, has a sort of epiphany and leaves to go back to school and study something more important.

The three threads are woven carefully together. In the past, Stuart and Jeannette stumble into a potentially disastrous affair, while the rest of the team crumbles about them for various personal reasons. In 1983, Jan and Franklin are in love, but somehow unable to commit fully, while certain impulsive, well-meant, acts lead to disaster for a friend of theirs. While in 1985 Jan learns more and more about what she really wants from life, and what made Frank and Stuart tick.

All this is further tied together by constant analogizing of such things as Poe's codebreaking story "The Gold Bug", the way that the four DNA bases form the fundamental genetic code for all life, and the way that Bach, in the Goldberg Variations, took four "base notes" and made a work of art as dizzying and complex, in a way, as life itself. The book moves towards a bittersweet and moving climax, marred perhaps just a bit by a somewhat overplotted and not quite believable crisis at the dataprocessing center where Frank and Stuart work. But by the end I was in tears, and the book had managed to create a world of its own for me, the way great books do.