Harry Turtledove was born on June 14, 1949. I should have posted something for his 70th birthday, but I was kind of busy, what with wedding preparations and a rehearsal dinner, for my daughter Melissa and her now husband Joshua Whitman. So, better late than never -- here's some of my reviews of Harry Turtledove's work. 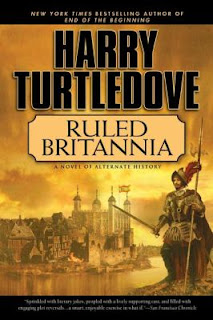 Harry Turtledove's Ruled Britannia considers a fairly common Alternate History point of departure -- the Spanish Armada was successful in conquering England in 1588.  (As in, for example, Keith Roberts's Pavane and Kingsley Amis's The Alteration -- two of the very greatest Alternate History novels.) But Turtledove sets his story much earlier -- not in roughly our present day, as with the two examples I mentioned, but rather in 1597, less than a decade into the Spanish occupation of England, with King Philip's daughter Isabella installed on the throne.  (As Turtledove points out, Isabella actually did have at least a tenuous claim to the English crown -- no surprise, perhaps, given how tangled European dynasties became.)  England has been forcefully restored to Catholicism, and a homebred English Inquisition is killing people for such crimes as witchcraft and sodomy.  But in general the populace seems resigned to the changes, if not precisely happy about them.

The protagonists of the book are the greatest playwrights of that time: England's William Shakespeare, and Spain's Lope de Vega.  Shakespeare is presented as a vaguely apolitical man, working away as his company, Lord Westmoreland's Men, presents such of his plays as Prince of Denmark and If You Like It.  He is almost simultaneously given two commissions.  A faction of English resisters wants him to write a play about Boudicca, the English queen who resisted the Romans, in order to help stir up passions against the Spanish occupiers.  And the Spanish authorities want him to write a play about King Philip, to be presented in his memory on the occasion of his death, which is soon expected.  Lope de Vega is a lieutenant in the occupying force, and it is his job to keep an eye on Shakespeare and his fellow players.  He is also charged with tracking down suspected criminals such as Christopher Marlowe, and he spends the rest of his time juggling a variety of lovers, both English and Spanish.

The novel moves rather slowly to its fairly predictable conclusion.  It's generally enjoyable -- it must be said that it's fun to daydream about additional plays from the pens of Shakespeare and Marlowe.  And Turtledove raids Shakespeare's works (as well as Marlowe's and Dekker's and Fletcher's and others) for much of the dialogue, as well as for the invented snatches he presents of the new plays.  But I couldn't quite believe in the presented characters of Shakespeare and de Vega: much attention is paid to putting period sentiments in their mouths, but their general actions and attitudes still struck me as too modern.  And the plot is a bit too slowly paced, not really twisty enough, and rather implausible in basic outline.  It's a pleasant way to pass a few hours, but not a fully successful book.

The other novella from The First Heroes is from Harry Turtledove, called "The Horse of Bronze", and it's a good one as well, the best story I've seen from Turtledove in some time. It supposes an alternate past in which the lands of the dawn of civilization are variously occupied by mythological creatures: centaurs, sphinxes, sirens, fauns, vampires, piskies, etc. The wise old centaur Cheiron takes a ship to the Tin Isles to discover why the tin necessary to make bronze has been in short supply -- and the reason (easily enough guessed, so I won't say it) bodes ill indeed for the centaurs' future.

The Enchanter Completed is a tribute anthology in memory of L. Sprague de Camp. Harry Turtledove has solicited a number of stories that are either in De Camp's style, or set in one of his fictional milieus, or even in one case feature De Camp and his wife as characters. It is an entertaining book. Highlights include Turtledove's own "The Haunted Bicuspid", in which a plainspoken businessman in mid-19th Century Baltimore gets a new tooth from an unexpected source, with amusing if rather scary effects.

Harry Turtledove's "He Woke in Darkness" (Asimov's, August) is a bit too formulaic – retelling the murders of James Chaney, Michael Schwerner, and Andrew Goodman in an alternate Philadelphia, Mississippi in which white people are those oppressed – but it was certainly spooky that the day I read the story was the day Edgar Ray Killen was at long last convicted for his role in the killings.

The lead story for the December Analog is Harry Turtledove’s novella “Audubon in Atlantis”. Turtledove is of course the leading practitioner of Alternate History, and this story is a nice example of the pleasures of that subgenre. It is straightforwardly a description of Audubon’s trip to the mid-Atlantic continent called Atlantis in search of the nearly extinct birds called “honkers”. (Large birds resembling, perhaps, moas.) Atlantis, we soon learn, is the Eastern portion of North America, which in this alternate universe has become separated from the rest of the continent – resulting in a different ecosystem (analogous in many ways to the differences between Australia and the rest of the world). The story is a very effective portrayal of Audubon as a man, as well as a nicely pointed look at the problems of isolated ecologies when they come into contact with the rest of the world.

At Analog in March Harry Turtledove offers a sharp look at a possible future, “The End of the World as We Know It, and We Feel Fine”. We see Willie playing with his pet fox, and encountering a quarrelsome neighbor, and meeting a pretty girl, and we learn what Willie is like, and his fox, and the girl, but not so much the neighbor – they are people designed for a nonconfrontational future, changed in the way the fox was changed to be doglike. And the story shows us what that gains, and loses, and asks (without an answer), would it be worth it?