Ian McEwan turns 71 today. Last year on this date I posted my look at his most famous novel, Atonement. Today, how about some short looks at a couple of very short novels. 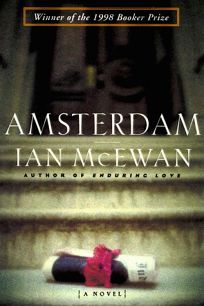 Ian McEwan won the Booker Prize in 1998 for Amsterdam. This is a very short novel (barely over 40,000 words) about two men, a successful composer and a successful newspaper editor, close friends, who were both lovers of the same woman. The book opens with this woman's funeral, then follows the newspaper editor as the woman's husband offers some salacious pictures of a high-ranking minister for publication. The composer is working on a commission for "The Millennium Symphony". He and the editor have a row about the propriety of publishing the pictures, then, feeling morally superior, the composer heads to the Lake Country to find "inspiration" to finish his symphony. There he, in a cowardly fashion, fails to intervene when he witnesses a woman accosted by a man. The moral failings of both men lead to professional disaster, which each blames on the other ... leading finally to a clever and vicious twist ending.  This is well done, sleek, blackly funny, but all that said it's rather slight. I like what I've read by McEwan (an early story, "Solid Geometry", which appeared in Fantastic in the mid-'70s, and an early, scary, novel, The Cement Garden). [Later I came to read Atonement and other novels.] And I liked Amsterdam. But I wouldn't have thought it measured up to a Booker. I will say that his previous novel, Enduring Love, looks based on reviews to be more substantial, and I seem to recall that it was a near scandal when it didn't win: perhaps the win for Amsterdam was a make good.

On Chesil Beach, by Ian McEwan 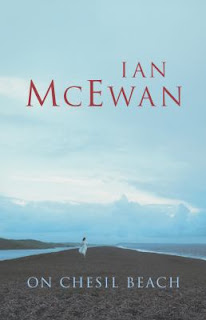 Ian McEwan is one of the best writers of our time. I am a particular fan of his novel Atonement, a remarkable look at the destructive effect of a small, only mildly malicious, act by a teenaged girl. As I have mentioned before I discovered him in of all places Ted White's Fantastic, back in 1975 or so, with the story "Solid Geometry", a very fine creepy piece.

His new novel is very short -- novella length at something on the order of 38,000 words. It is nominally the story of one night -- the wedding night of a young British couple in 1962. (Critically, as Christopher Hitchens points out, a year before "sexual intercourse began", in the famous words of Philip Larkin.) Of course the story really extends backward -- to the childhoods of the two, and to their courtship -- and forward, to tell quickly how their lives worked out.

The trouble is, they are both virgins. Edward, the man, is terribly concerned that his inexperience will lead to an embarrassing failure to perform -- or, perhaps, rather too rapid a performance. Florence's problems are more severe -- she is terribly afraid of sex, and she really does not want to have sex at all. Ever. (There is a brief hint -- which I may be exaggerating, but Hitchens' review (in the new Atlantic) suggests he detected such a hint as well -- that she may have been abused -- or at least sexually frightened -- by her father.) It is not that Florence does not love Edward -- she does, quite sincerely. And she is not purely a mouse -- she is a very accomplished violinist, and the forceful leader of a promising string quartet. Edward quite sincerely loves Florence, and is consumed with desire for her. He took a first in History and hopes to write short popular historical books.

Their real problem, however (beyond Florence's evident psychological hangup, whatever its origin), is that they are culturally unable to talk about sex, or about their desires, fears, experiences or lack thereof -- anything at all. Mind you this is still a problem for people, but not to anything like the degree it was in 1962 (perhaps, though I am not sure, especially in England.) Class is also an issue -- Edward is of a slightly (though not terribly) lower class than Florence, and in particular his family has much less money. And so the novel turns on an eventually disastrous experience, and the small-t tragic results not just of that experience but of their dual failure to work through it by even the simplest of words.

It is very fine stuff, if quite small scale -- minor, surely, but well worth having. It was made into a movie, starring Saoirse Ronan and Billy Howle, in 2017.