June 5 is Margo Lanagan's birthday. She's a brilliant Australian writer, whose stories are noticeable tinged with very effective horror. Here's a collection of my Locus reviews of her stories:

A few anthologies of varying types prompt more thought about how theme books differ from general anthologies. It’s my general view that too specific a theme weakens a book – partly by leading to too many too similar stories, and partly by constricting writers’ imaginations. So I look forward in particular to completely “open” books, such as Eidolon 1, a descendant of the very fine, now defunct, Australian magazine Eidolon. This anthology is full of good work. In particular I liked Margo Lanagan’s quite nasty “A Fine Magic”, in which a magician plans revenge on two beautiful if rather vain sisters who have rejected his suit. The magic described is lovely and scary – and the results uncompromising.

The prize is Margo Lanagan’s “The Fifth Star in the Southern Cross”. Uncharacteristically for Lanagan, this is set in an unambiguously science-fictional future, in which human fertility is in ruins (we assume as a result of environmental damage). We witness the protagonist’s encounter with an apparently alien prostitute, then a meeting with a woman he had a one night stand with, which surprisingly has resulted in a viable pregnancy. It’s bitter but not mean, the characters damaged but not evil. Powerful stuff.

At any rate, Extraordinary Engines is indeed quite fun. To begin with my favorites, I really liked two stories: Margo Lanagan’s “Machine Maid” and Jeff VanderMeer’s “Fixing Hanover”. Lanagan’s story concerns a young bride come to an isolated Australian ranch. She has to adjust to the loneliness, the stress of leading a household, and to her husband’s attentions, for which she was woefully unprepared. Things get worse when she discovers (hardly to the reader’s surprise) the extra uses her husband can make of the robot maid he bought for her. The story works particularly well because of Lanagan’s fine writing, her capturing of the heroine’s emotions, and the slightly surprising changes she rings on the more or less expected ending.

Another anthology very much worth your time – but possibly hard to find for Americans – is x6, an Australian collection of six novellas – mostly quite long novellas. The best stories have strikingly similar themes. “Sea-Hearts”, by Margo Lanagan, gets to a similar place from a different direction. It set in an isolated fishing community, where girl children don’t seem to be viable. The “Mams”, or wives, come from the sea. We can see where this is going – it’s a selkie story, of course. And it turns on the boys’ realization of their mothers’ state, and their reaction. Perhaps it’s more romantic than Haines’ story – perhaps too optimistic – but to me it made its point, about the dark way men can mistreat women, quite as effectively if not more so, and yet allowed that things needn’t be that way.

I spent last month immersed in three new urban fantasy/paranormal anthologies from Ellen Datlow, and this month I see another: Blood and Other Cravings. The theme is ostensibly vampires, but often not traditional vampires: instead creatures that feed on, or crave, a variety of essential substances, not just blood. The mode is generally horror. As we certainly expect from Datlow, it’s a strong book. John Langan, Kaaron Warren, Richard Bowes, and Lisa Tuttle all shine, but my favorite story is from Margo Lanagan. “Mulberry Boys” plops us down unexplained with a teenaged boy and a sinister older man, chasing a “mulberry boy”. We gather quickly that the older man is paying the villagers where the younger boy lives to allow him to alter a suitable subset of their children to be fed only mulberry leaves, and so to produce, horribly, something valuable called silk. The story portrays powerfully how this changes the “mulberry boys” (and girls), and how the protagonist comes to grips with what this really means – it’s true horror, and yet leaves its characters some agency. (The lack of true agency is perhaps my main complaint about much traditional horror – what sort of story is it if the characters really never have a chance?) 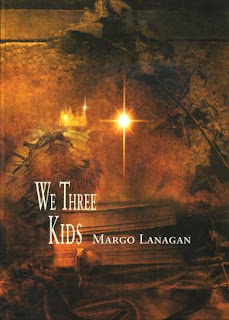 And finally I will mention a very strange Christmas story from Margo Lanagan, We Three Kids, the PS Publishing year-end special. This is the story of Yoseph and Mariam, who have just had a miraculous child – and the three very odd visitors who seem terribly interested in the child. That framework is familiar of course, but the visitors, who first come to a sandal-maker's house and who don't seem quite human, give things an aura of real strangeness and a hint of horror. As ever, Lanagan comes at things from an unusual angle indeed, effectively disquieting.

Finally I must belatedly mention a new collection of stories (many previously collected) from Margo Lanagan, Singing My Sister Down and Other Stories. It’s is certainly a first-rate book, and it includes three new stories. My favorite of these is “Not All Ogre”, about Torro, who is half-ogre, and who comes to with two friends. We get hints of the menace of ogres the townspeople sense, and the changes undergone since the old prince was deposed – and of Torro resisting his ogreish urges. Then the story turns – it is a Sleeping Beauty retelling of a rather ghoulishly horrific, and effective, sort.