Charles Sheffield was born in England on 25 June 1935, and died in 2002. He lived in the US for a long time, and was married to the excellent writer Nancy Kress. I loved Sheffield's work when I was first reading the magazines, and when he was a regular in Analog, Galaxy, and Amazing. I highly recommend novels like Cold as Ice and the later Heritage Universe series.

Alas, the only reviews I wrote of his work were of a couple of books in Tor's YA series called Jupiter, from the late '90s. I didn't find these as successful as his best work. Still, here are two shortish reviews of a couple of those books.

Putting Up Roots, by Charles Sheffield

Charles Sheffield's Putting Up Roots is a Jupiter novel from Tor. That is, one of their new series of YA SF novels.  These seem explicitly to be an attempt to recreat something at least vaguely resembling Heinlein's juveniles, but for the late '90s. 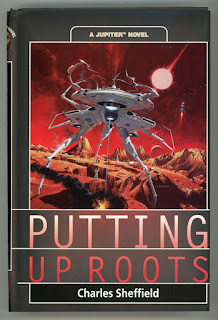 Unfortunately, many of the efforts in this line I've read have been forced. Putting Up Roots is not a terribly successful effort, though, that said, I still found it a decently enjoyable read. It concerns a teenager, Josh Kerrigan, who is basically abandoned by his actress mother. He ends up with his aunt and uncle, who are living on an isolated family farm, which is being put out of business by a big agricultural corporation. This corporation makes a deal with the older couple which ends up sending the boy and his autistic cousin, Dawn, to Solferino, a newly opened planet with agricultural prospects. They end up in a group with several other similarly abandoned kids, and with a couple of suspicious-acting adults. After a few not very convincing adventures, they learn what the mysterious goings on really are, and they also (natch!) learn to trust and value the other kids despite original hostility. They don't exactly solve the main plot problem: they have it solved for them.

That's one problem.  Another is the fundamental absurdity of the whole situation.  For one thing, the pioneer farming setup just seems silly. We're asked to believe, yet again, in faceless utterly evil corporations, who'd gladly murder several kids, without compunction, yet who also clumsily screw up the situation. (But these corporations aren't all dumb: they can manipulate local weather so that Josh's uncle's back 40 gets a drought while the neighboring corporate farms get plenty of rain.) We're asked to act as if a major plot element is a surprise: Solferino turns out to have (Gasp!) intelligent natives, even though the eeevill corporations insist they are just dumb animals. Gee, we've never seen an idea like =that= before. (And of course it's the autistic kid who breaks through to them.) And as I said, the eventual plot resolution is handed to the characters on a platter, not earned.

The Cyborg From Earth, by Charles Sheffield 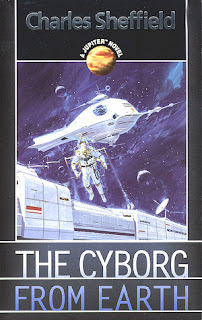 I read another book in Tor's Jupiter series of YA novels, Charles Sheffield's The Cyborg from Earth. This is probably the best I've read in this line of books. It's got some silliness, and Sheffield takes some shortcuts, but a lot of it was pretty neat, and it was a fast, compelling read. Jefferson Kopal is the heir to Kopal Transportation, a major spaceship-building concern. Family tradition deems he must spend a few years in the Navy before taking his board position, but he is not terribly interested in Navy service.  His interests are in the area of science and engineering, like his disgraced uncle Drake, who disappeared taking a wormhole the wrong way many years previously.  But duty, and his ailing mother's concern over his slimy uncle (really a cousin) and the uncle's fairhaired boy of a son, and their manoeuvring to take over the company, lead him to enter the Navy, qualifying by the skin of his teeth.

He is sent to the Messina Dust Cloud, where the colonists are supposedly close to rebellion.  Worse yet, the colonists are rumoured to be cyborgs: against Earth law, they have AI's and supposedly they themselves merge with machines.  On the way he realizes that something is up: the Captain is incompetent, and seems to have no intention of negotiating with the colonists. But an encounter with a space-born life form, a Space Sounder, leaves Jeff seriously injured, and at the mercy of the Messina colonists. Their cure for him leaves him a cyborg, too, by Earth standards.  Soon his loyalty to Earth is tested, as it becomes clear that the Earth authorities are not playing fair with the colonists, that the prejudice against AI's is dangerous and for example has contributed to his mother's illness, and that he really likes some of the Messina colonists, including a girl his age and the mysterious scientist Simon Macafee, who has invented a form of artificial gravity control. The solution involves the nature of the Space Sounders, the history of Simon Macafee and his discoveries, and Jefferson's own responsibilities. I did like it, despite some predictable twists, a bit of excessive villainy on the part of Earth, and some scientific, character, and plot implausibilities.
Posted by Rich Horton at 5:18 AM