Birthday Review: With the Lightnings, by David Drake

Birthday Review: With the Lightnings, by David Drake

On the occasion of David Drake's birthday, here's my review of the first of his Leary/Mundy novels, which I have found very enjoyable.

David Drake's With the Lightnings, from 1998, is the first of a space opera series featuring Lieutenant Daniel Leary of the Republic of Cinnabar navy. As far as I can tell there have been two further books (Lt. Leary Commanding and The Far Side of the Stars) with a fourth in the series, Some Golden Harbor, due this year. [Many more have followed.] The model here is clearly naval adventure fiction resembling Patrick O'Brian's Aubrey/Maturin series, or perhaps C. S. Forester's Hornblower series. I can't tell if the correspondences with Hornblower might not be closer than with O'Brian, but there are definitely points of comparison with the Aubrey/Maturin books. 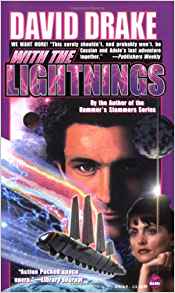 Daniel Leary is a junior lieutenant from a powerful family on the planet Cinnabar, leader of a group of human-colonized worlds. His father is one of the leading politicians on Cinnabar, but Daniel and his father are not on speaking terms. Leary is assigned to a small diplomatic mission to the independent planet Kostroma, which has historically been neutral but favoring Cinnabar in an ongoing rivalry with a fairly evil seeming group of worlds, the Alliance. A new Elector has taken over on Kostroma, and it's necessary to make sure the Alliance doesn't sway this Elector's opinions.

Leary has an interest in natural history (thus Drake takes a "Maturin" characteristic and transfers it to his "Aubrey"-analog), and he makes his way to the Elector's Library. This library is run by Adele Mundy, who has spent 15 years or so in Alliance space learning to be a great librarian. (Er, information retrieval specialist.) But Adele is actually part of a once influential Cinnabar family, the Mundys of Chatsworth, most of whom were brutally murdered when they were accused of treason. The accusations were made by ... Corder Leary, Daniel's father. (It seems that the accusations were correct to an extent -- some of the Mundys were traitors, though not Adele, but the resulting punishment, murdering everyone connected with the family including Adele's 10 year old sister, was excessive.) Adele, basically apolitical, survived by virtue of being away in Alliance space. But when Adele realizes who Daniel is, she insults him gravely. Daniel's only recourse, he feels, is to fight a duel, but he finds a graceful way out of this and the two become friends of a sort.

But then, after a very long time setting things in place, all heck breaks loose. An Alliance spy has planned a coup, and the Elector is overthrown by a man in league with the Alliance. Most of the diplomats are summarily murdered, but Daniel escapes, along with a crew of "sailors" he has assigned to make shelves for Adele's library. And of course, Adele, a crack shot and a great hacker too, comes along.

There follows a series of hair-raising adventures, both on surface ships and space ships. Daniel Leary is shown (surprise!) to have brilliant leadership capabilities, while Adele proves a very resourceful communications officer type. (She seems well placed to take the Maturin role of non-Naval sidekick who will have a secret job as a spy on future missions.) And in the end Daniel more or less single-handedly (well, double-handedly with Adele, and also with the help of his 20 or so sailors) takes over a space ship and saves the day against amazing odds.

So, yes, it's basically pulp, but in the best way. The main characters are impossibly brilliant. The bad guys do some sneering. There are class assumptions, and servant/master relationship assumptions, that I have a hard time swallowing. The whole thing is pretty implausible. I know all that -- but I still enjoyed it immensely. It's just nice light fun. The main characters are engaging and easy to root for. (And so far as I can tell not destined for each other. (Adele is about a decade older than Daniel, and seems to be not interested in romantic relationships of any sort, while Daniel is very interested in short-term (i.e. one night) romantic relationships with girls who are much prettier than Adele.))

(I note that the cover of my 1999 Baen paperback has a Publisher's Weekly quote that refers to "Cassian and Mundy" -- I wonder if Leary's name wasn't Cassian in a prepublication version of the book. There is no Cassian in the book as published.)
Posted by Rich Horton at 8:42 PM