Matt Ruff turns 53 today (damn kids!). He's one of the really first rate writers of our time. His works often straddles genre borders. My favorite of his novels is Set This House in Order, from 2003, but I can't find anything I wrote about it. So instead I've resurrected a rather brief review I did for the SF Reader site at about that time about his second novel. (The SF Reader post is here.)

There are plenty of wonderful older books that may not have received their due notice. I won’t venture too far into the past: Sewer, Gas, & Electric is a long, inspired, hilarious but not frivolous SF novel from 1998. 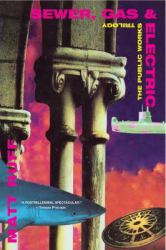 The novel is set mostly in 2023, with flashbacks as far back as the Civil War. We open with Joan Fine battling mysterious creatures in New York’s sewers. Harry Gant, her ex-husband, is erecting yet another tallest building, while fretting over the fact that his company’s androids are being called "Electric Negroes". Philo Dufresne, the blackest African still alive (a plague has killed most black people in the world) is unsuccessfully writing a novel and successfully practicing "benign eco-piracy" in his polka-dotted submarine, the Yabba-Dabba-Doo. "None of this is all that unusual", writes the author. Neither, apparently, are a surviving female Civil War vet from Canada, an AI version of Ayn Rand, a conspiracy to refile pornographic books in libraries so no one can ever find them, or talking Volkswagens that love Janis Joplin.

Obviously, this book is a bit different. The central plot is fairly straightforward, involving a plan to destroy the world. Harry Gant, Joan Fine, and Philo Dufresne end up mostly on the same side, trying to save the world. It’s hard to say much more about the plot, because identifying the villain would be a spoiler. But the book is packed with incident, and with ideas that are sometimes funny, sometimes shocking, and usually thought-provoking.

Somehow Ruff mixes up alligators in the sewers, a plague that kills all the black people in the world, boy scouts, Ayn Rand and a serious discussion of her works (including a beautiful plot summary of Atlas Shrugged), J. Edgar Hoover, Artificial Intelligence, Disney, a parti-colored submarine, and a series of "ironic murders" into an absorbing read, very funny but very serious. It’s still in print, and I recommend it highly.
Posted by Rich Horton at 10:08 AM