Today is Wil McCarthy's 52nd birthday. Thus I am rescurrecting a review I did of his novel The Wellstone, that appeared in the June 2003 issue of 3SF. 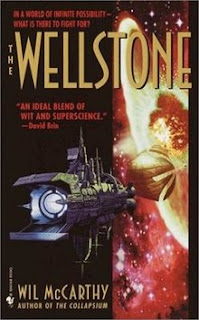 I quite enjoyed Wil McCarthy's The Collapsium a few years back, a generally light-hearted, almost Tom Swiftian, novel set a few centuries hence in the Queendom of Sol. This told of Bruno de Towaji, a great inventor who is called on repeatedly to save the Solar System from destruction, and who finally becomes the permanent consort of the Queen of Sol. There is a lot of wacky tech at the heart of the Queendom. Artificial matter such as super-dense collapsium, which allows the construction of tiny "planettes" with reasonable gravity. The Fax system, by which people and other objects can be transported as information at light speed, and reassembled at their destination. Filters applied to the information in the Fax allow bodily modifications, most especially elimination of disease and aging. Programmable matter, such as wellstone, which allows ready construction of such things as solar sails by reprogramming reflectivity easily.

The sequel is The Wellstone, set some time later. The Fax filters have led to practical immortality (or immorbidity), which is a problem for the children. What will they do when they grow up? Their parents aren't about to vacate their jobs, for the most part. Some of these kids turn delinquent as a result -- or perhaps they would have been that way in any case. A number of kids are being disciplined by confinement to Camp Friendly, a "summer camp" located on a tiny "planette". One of these kids is the POV character, a young engineer named Conrad Mursk. Another is the Crown Prince Bascal, the son of Bruno de Towaji and the Queen. Bascal is extremely talented, a noted poet and a born leader, and he is very rebellious, as well as very spoiled. He incites the boys to an act of sabotage -- they escape via fax to Denver and release a dangerous substance that turns programmable matter to junk. They are soon captured, and Bascal's furious parents return them to Camp Friendly, with even stricter confinement (no working Fax gates).

But Bascal is not to be thwarted. With Conrad's sometimes reluctant help, with the help of a semi-accidental recruit, a teenaged girl named Xmary who was arrested by mistake in the earlier incident, and with the continued help of Bascal's less intelligent henchmen, he hatches another audacious plot. They use the properties of programmable matter to create a "homemade" solar sailship from the planette, and they head for the nearest working Fax gate. But a surprise awaits them there ...

I thought this even a better book than The Collapsium. It lacks the previous book's almost insouciant inventiveness -- the "Tom Swift" nature I referred to above. But the characters are done better, in particular Conrad himself, and Bascal as seen by Conrad. Bascal is an interesting creation -- a nice mixture of admirable and dangerous characteristics. Conrad and Xmary are nicely handled positive characters -- their frustration at their lot as children in a world with no room for them as adults is well portrayed. The book remains inventive, and often funny, with a dark undertone (reinforced by a downright grim prologue and epilogue) that lends a certain (forgive me!) gravitas to the theme.

I've also posted this review of McCarthy's To Crush the Moon.