A Great and Somewhat Neglected SF Novel: A Mirror for Observers, by Edgar Pangborn

A Great and Somewhat Neglected SF Novel: A Mirror for Observers, by Edgar Pangborn

Edgar Pangborn (1909-1976) was a prominent SF writer when I was young, regarded as significant if somewhat minor -- writing in a somewhat Sturgeonesque mode, but I think his star has dimmed in recent years. His sister Mary (1907-2003) was also a writer, less prolific and less successful. Edgar was apparently gay, though as far as I know he was never "out", and Mary at least denied this in later years. (To the extent one can deduce a writer's sexuality from his fiction, I would agree that Pangborn's work suggests that it was written by a closeted gay man.)

Pangborn was a writer from early days -- his first novel, a mystery called A-100, published as by "Bruce Harrison", appeared in 1930. He apparently published regularly in many genres in the pulp magazines, always pseudonymously, for the next couple of decades. Only in the 1950s did he find his true metier, science fiction, and only then did he abandon his pseudonyms. (Though two of his very best novels under his own name, The Trial of Callista Blake and A Wilderness of Spring, are not SF.)

One reason Pangborn's reputation has flagged may be that some of his later work, mostly stories set in a slowly recovering, somewhat bucolic, post-Apocalyptic future, descends into a distinctly cloying sentimentality, married with a certain unconvincing lecturing tone. But it's never fair to judge a writer by his worst work, and in Pangborn's best work the sentimentality is still present, but it does not cloy; and the lecturing is muted into warm philosophical musing. This is true of Davy, and of several of the late tales, and so I regarded Pangborn with much affection. But for one reason or another I had never read his best early SF novel, A Mirror for Observers, despite having had a copy since 1975. It's not that the book was uncelebrated -- it won the International Fantasy Award in 1955. (It certainly should have won the Hugo that year, but in one of the hard to explain stumbles of the Hugos, the award went instead to Mark Clifton and Frank Riley's They'd Rather Be Right. It's interesting to think of how different Pangborn's later reputation might have been had it won.)

At any rate, having finally read the novel, I find myself really impressed, really moved. This is not to say it's a great novel exactly -- there are missteps and occasional clunky aspects. But its great moments transcend its weaker moments -- just as we should judge Pangborn's career by his best work, A Mirror For Observers gains its impact from its peak moments. 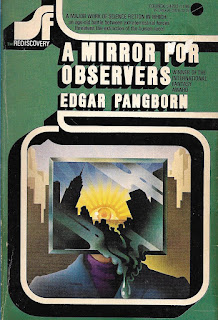 The novel opens in an underground city underneath Canada's Northwest Territory (as it was called at that time). Namir the Abdicator is talking with Director Drozma. The two are Martians, or as they call themselves, "Salvayans". They are humanoid (enough so that with some plastic surgery and "scent reduction" they can pass as human), and very long lived. Most Salvayans abandoned Mars for Earth some 30,000 years prior to the action of the novel, because of the drying, and they have been guiding human development ever since, with the goal of "Unity" -- a hope that they will be able to reveal themselves and live in human society. The optimists among them believe that time is close -- the pessimists believe that time will never come, and such events as the accidental destruction of one Salvayan city that happened to be under the ocean near Bikini Atoll have only intensified that feeling. Namir is a pessimist (he has "abdicated" his role as a human Observer), and he is living among humans, trying to encourage the destructive impulses of certain promising people. (The hope of the Abdicators is that humans will destroy themselves, leaving Earth to the Salvayans.) At this time he is trying to influence a brilliant 12 year old boy, Angelo Petrovecchio, who lives in an exurb of Boston called Latimer.

The rest of the book is in two parts, reports from another Salvayan, the Observer Elmis, to Drozma. Elmis has been assigned to observe Angelo, and to try to extract him from Namir's influence. The first part deals with Elmis, calling himself Ben Miles, living in Latimer, in the boarding house run by Angelo's mother. Ben is much taken with Angelo, who is a very intelligent boy (with a bum leg), given to reading the classics; and also with a neighbor girl, Sharon Brand, who declares herself in love with Angelo, and who has a great imagination and a tremendous musical talent.

Ben soon recognizes Namir in the area, and also a boy named Billy Kell, who leads a local gang, and who treats Angelo nicely, hoping to lure him into the gang. It soon becomes clear that Namir is working through Billy Kell (and there is another secret there ...), and Ben and Namir begin to fence, leading to a suspicious crime, and a disastrous confrontation, which Ben, too much the pacificist, fumbles. And then Angelo, enmeshed in Billy's gang, gets involved in a gang fight with horrible consequences. And he runs away.

The second part sees Elmis, now calling himself Will Meisel, 9 years later, still trying to find Angelo. In the mean time he has provided for Sharon's musical education, setting her up with her blind piano teacher and establishing a school. The political landscape is fraught -- a nativist party, the Organic Unity Party, is planning a takeover. The leader, Joseph Max, is transparently an amalgam of Hitler and Joe McCarthy, but in today's environment it's impossible to avoid seeing parallels with our current President. Elmis realizes that Joseph Max's deputy Bill Keller is Billy Kell, and he decides to investigate, and soon learns that Namir is also involved, and then, to his shock, encounters an Abraham Brown, not a Party member but an associate, and recognizes him as Angelo.

Sharon turns up again as well -- making her American debut as a concert pianist. Elmis/Ben/Will meets her, and she knows him. She is a genius (of course) (playing among other composers Andrew Carr, a major composer as well in Pangborn's "The Music Master of Babylon", which otherwise does not seem to be in the same continuity as A Mirror for Observers). They renew their friendship, and soon they are meeting with Angelo/Abraham, and trying to extract him from the clutches of the Organic Unity Party. All this is successful, but Namir's scheming, and Billy Keller's, and the weakness of Joseph Max, leads inexorably to an apocalyptic event.

The results are truly wrenching (and inevitable in a way clear partly from the thematic course of the novel, which does seem a bit too programmed at times). The book achieves true tragedy -- and yet is also optimistic. In this, really, it reflects the Davy sequence -- again, an apocalyptic event is followed by horrible hardship, but leads to a newly pastoral future, and considerable hope.

It's really very powerful stuff, even though there are the missteps I mentioned. Part of this is the perhaps over-idealized portraits of Angelo/Abraham and Sharon. They are people we love and root for -- but perhaps we don't quite believe in them. (Angelo in particular -- Sharon is a more complete and affecting portrait.) Elmis is the character who truly lives. His intense love for specific humans (Angelo and Sharon), humans in general, and the Earth as a whole, completely informs his narrative. That's what makes it sing. Pangborn always had a tendency towards sententiousness, and that does manifest itself at times here -- but his love for people, and for the pastoral, was real, I think, and it shines through honestly in the best passages of this novel. It brought me to tears, more than once -- and it may be that sometimes those tears were jerked manipulatively, but mostly they were honest, and tears of awe and love as well as sadness.

This novel was discussed at Worldcon, at a panel run by John Hertz, who has done a series of discussions of Classic SF at various Worldcons. This con also featured discussions of Heinlein's Red Planet and Brackett's The Sword of Rhiannon. (I attended the latter.) I thought the discussion of A Mirror for Observers was particularly good. John's view of the novel is acute and sensible, and Alvaro Zinos-Amaro (who I must credit for spurring me to finally read the book) made a number of insightful comments as well. Indeed our discussion spilled over to an impromptu additional session after the panel, with Alvaro, myself, John Hertz, and others considering this book as well as stuff as diverse as The Tale of Genji.

What conclusions did we reach? I wish I could remember everything more clearly. One thing that strikes me as important is the depiction of the Martians, who think of themselves as a superior race, as just as deeply flawed as humans. (Morally, of course, but also in such ways as having little musical ability.) The Salvayan dream of unity is just as important for their development as it is for human development.

One other thing we noticed -- I think this was Alvaro's observation -- is that central to the story is Elmis' love of humans -- individuals and the whole -- and also of Earth, and that how that was most abundantly illustrated in his descriptions of nature, of natural scenes. Pangborn's love for the pastoral is both a strength and a weakness -- he could be terribly sentimental about it -- but in this book, which is mostly set in cities, the descriptions of the country are truly effective.

Another key element of the book is the slight distancing effect of Elmis' being unhuman, but nearly human. He is just enough separate from the main characters, and from humanity itself -- and believably so -- to give his perspective an effective angle. This is a common enough SFnal device, but I thought used effectively here.

There's the question of the Mirror -- which is an actual object, a bronze mirror from the Mycenaean era. It is presented as having near magical effects (never explained): one who looks in it sees something surprising, perhaps shocking -- and we assume (we are never told) that one sees something like a true vision of one's own character. I'm not actually sure this was necessary to the book, actually.

It's a grave book and a warm one; a sweet book and a bitter one. I loved it -- I wish I had read it back 40+ years ago when I bought my copy, but perhaps it's as well that I didn't. I imagine I'd have liked it then, but I wouldn't have read the same book, so to speak, and maybe it's a better book from my older perspective. It can't be called forgotten, but is does seem neglected. I really do wonder how differently it would be regarded had it won the Hugo. I hope it gains a new audience in these later years.
Posted by Rich Horton at 8:05 PM