Today is Patrick O'Leary's birthday. O'Leary was one of the most promising and fascinating new writers around the turn of the millennium, but, sadly, we've seen little from him since this, his third novel. I'm taking the opportunity to repost this review I did back when it first appeared on my SFF.net newsgroup. (A shorter version appeared in the magazine 3SF.) I've revised the review a bit to reflect what we know since the book appeared.

Patrick O'Leary is an SF author from Detroit.  He's written three  novels, all much praised: Door Number Three, The Gift, and The Impossible Bird. When I read Door Number Three I labelled it magical-realist wacky science fiction, with significant Catholic content. (It's a pretty good book.) O'Leary is an extravagant admirer of that other Catholic SF writer, Gene Wolfe, and Wolfe has been known to praise O'Leary's work quite fulsomely. I was convinced O'Leary was on his way to becoming a major voice in the SF field after these novels, but since then there has only been one more book, a story collection called The Black Heart, in 2009. I don't know what happened but I suspect it may have been the usual sad story -- talented writer is just a bit too strange (in a good way!) to sell widely. 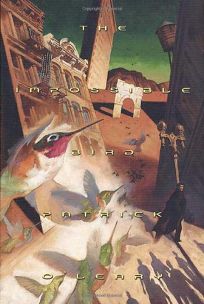 The Impossible Bird is another very strange book that might be called "magical realist science fiction".  (Other books (from the same period) I'm tempted to so classify: Signs of Life, by M. John Harrison; and Zeitgeist, by Bruce Sterling.) It is at core the story of the relationship of two brothers, Mike and Daniel Glynn, who grew up Catholic in Saginaw, MI, in the 1950s.  Now, in about 2000, Mike, the elder by two years, is a successful director of TV commercials, and Daniel is an English professor, living in Detroit.  Throughout their lives it seems Mike has been the better looking, more athletic, more aggressive; while Daniel has been the nerdier and more intellectual.  Daniel is happily married with a 9 year old son, while Mike is divorced.

And both of them are dead.  (Thus in some ways the book also resembles for example Pincher Martin.)  This isn't at all clear at the open.  Daniel seems to be in shock after the death of his wife, while Mike is returning from an ad shoot in the Amazon.  Both are contacted by men who seem to be government agents, and ordered to find each other.  In Daniel's case, the spur is the kidnapping of his son.  But soon the strangeness of their situations becomes obvious. Why are the streets so empty?  Why do people kill each other, with the victims not minding?  What are the hummingbirds that everyone seems to have? And what does the boys' old high school teacher, Dr. Kindler, have to do with all this?  To say nothing of the childhood occasion when the two boys saw a UFO.

It's not entirely clear to me that we are to read this as I read Pincher Martin -- i.e. it's all an hallucination; or if it is to be regarded as real; though on balance I think the after death scenes are to be regarded as real.  The explanation for the after death situation vaguely resembles Robert Charles Wilson's Darwinia (though it is really rather different), and the philosophical working out of that situation is notable for disagreeing violently with the philosophical working out of an arguably similar situation in Greg Egan's Schild's Ladder.

The book basically is about Daniel and Mike working out their issues with each other, and it succeeds rather well on this level.  It's moving, rather sad, and it's also a rather absorbing book.  The SFnal content, however, didn't always quite work for me. And perhaps the characters of the two men, though reasonably well portrayed, are drawn a bit too obviously from stock. Nonetheless, a fine book, and I wish there had been many more from O'Leary.
Posted by Rich Horton at 6:37 PM