Back in the day people used to recommend Jennifer Crusie as one of the best of contemporary romance writers, so I tried a couple of her early novels (which I believe were first published as category yard goods, Harlequin or a similar imprint, but which she was able to have reprinted when she became popular) without much success. But then I bought a later novel, a hardback I believe, and it was a lot better. So on the occasion of birthday I'm reposting something I wrote a long time ago about the novel of hers I liked best. 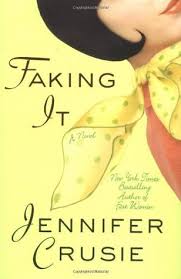 I have previously tried a couple of Jennifer Crusie novels, and while I have found them moderately enjoyable they have not really lived up to the praise she has received. Her fans have recommended other novels. But my method of picking stuff has been more contingent, not well organized at all. And that continued when I picked up her 2002 novel Faking It at a used book sale a week or two back. However, this time I think I hit the jackpot. Faking It is, it would seem, everything Jennifer Crusie's fans have claimed. Its most distinguising feature is an easy, fluent, constant flow of clever, limber, comedic prose. Line by line the book is not necessarily laugh out loud funny but entertaining and imaginative and sharp.

I should note that the book is rather longer than her genre romance novels. It was published in hardcover, and seems to have been marketed more as "chick lit" than as traditional romance. And indeed while it qualifies as a romance -- certainly it features two main characters who fall for each other from pretty much the start, plus plenty of sex -- it also qualifies as a well-done mystery/caper sort of story (at times almost recalling Donald Westlake's Dortmunder novels), and it has some reasonably acute character observations to make.

The story concerns Matilda (Tilda) Goodnight, about 35 years old, a painter of imitation impressionist murals for people's walls. Her family runs a somewhat down at heels gallery in Columbus, Ohio. This family includes her mother Gwen, her sister Eve, Eve's daughter Nadine, Nadine's father Andrew, who divorced Eve when he realized he was gay, but stayed friends, and Andrew's lover, the family lawyer, Jeff. The family is in debt, partly because of Gwen's feckless, and dead, husband Tony. One thing Tony did was to have Matilda forge a series of paintings supposedly by Scarlet Hodge, the fictional daughter of Homer Hodge, who had done some American primitive paintings that he had actually been able to sell for good money. But now there is a problem -- one of the Scarlet Hodge paintings has been sold by mistake -- a painting that could easily be identified as a fake, which would possibly lead to lawsuits involving the other Scarlets. So Matilda tries to steal the painting back from Clea Lewis, the woman who has bought it.

Clea is a rather nasty 40ish woman who is trying to reel in rich Mason Phipps as her new husband, after the previous two died in suspicious ways. Clea also stole $3,000,000 dollars from a former lover, Davy Dempsey, a con man trying to go straight. Davy wants the money back, so he has abandoned his straight ways to try to steal the money from Clea -- but he runs into Tilda in the process. Standard meet cute -- and quickly they are kissing. But Tilda has basically sworn off men. And she still needs that painting.

So the story continues. Tilda makes Davy promise to get her the painting back. Mason Phipps, meanwhile, is after the Goodnight Gallery, and Gwen. Davy is after Tilda, who is attracted but can't admit it. Davy's friend Simon is after Eve, only he doesn't know it, because he only know's Eve's fake uninhibited personality, Louise. Clea seems to have hired a hit man to kill Davy, but Gwen finds herself unaccountably attracted to the hit man. Tilda realizes she needs Davy to steal or otherwise acquire all the other Scarlet Hodge paintings. Davy has ideas for revitalizing the gallery. Davy's unreconstructed conman father shows up. And so on ... A lot goes on, all quite interesting, all cleverly told, nicely plotted, and as I said very well put together prosodically. The title is nicely reiterated thematically -- fake paintings, fake identities, fake orgasms are all central ... A very light novel, to be sure, but a consistent delight.