In honor of Damon Knight's birthday, I'm reposting this review, which I first wrote about 15 years ago, of his last (and possibly best) novel.

Humpty Dumpty: An Oval, was Damon Knight's last novel, published in 1996. It is a very strange book, reminding me somewhat of Gene Wolfe (perhaps particularly Peace), and of Patrick O'Leary's The Impossible Bird, and of other afterlife fantasies like William Golding's Pincher Martin. (Golding, by the way, was also born on September 19.) Which is a hint that I regarded the book as an afterlife fantasy, though that interpretation is not entirely clear. 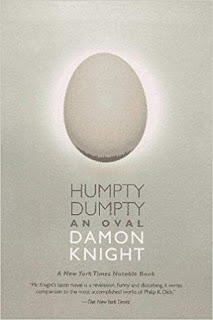 The book opens with the narrator, Wellington Stout, in an Italian hospital, recovering from a shot to the head. He had come to Italy for his beloved stepdaughter's wedding, but had agreed to ferry a mysterious package for his less than beloved older brother -- and in trying to deliver the package he seems to have been shot.

Stout is a salesman for a firm dealing in ladies' underwear. (A running joke -- or rather a detail of characterization -- is his obsession with women's breasts and with their bras.) He is 64 years old, an American long resident in England. We learn a bit about his past life -- a couple of marriages, one failed, one seemingly happy but ending with his wife's untimely death. Lots of affairs are implied. His relationship with his stepdaughter (actually his first wife's daughter by her second husband, whom Wellington raised after her mother fell apart) is loving but perhaps on the edge of impropriety. He seems a nice guy but far from perfect.

However, after his injury, he seems to lose his grip on reality. Or perhaps reality has lost its grip on the world. There seem to be competing groups of aliens, and of powerful secret humans, vying for control of the world. Stout finds himself willy-nilly on a journey westward, from Italy back to England to his childhood homes in Pennsylvania and Oregon. At first it seems that an explanation for all the strange goings on may be forthcoming -- what is the message Stout was carrying? Are the aliens from the planet Mongo real? what do the strange voices Stout keeps hearing, muttering almost intelligible phrases, mean? etc. etc. But as Stout's travels continue, things get weirder and weirder.

I quite enjoyed the novel, but I remain puzzled by it. We do get a pretty comprehensive portrayal of Wellington Stout, and of his life, in an odd fashion. And the weird events are continually interesting. But what it all means? I don't really know. It's easy enough to say that it could be an afterlife fantasy -- Stout hallucinating as he dies from the bullet in his head -- but even if that's true that's not much of a stab at what the novel really means ... For all my puzzlement, this novel has stuck with me for a long time -- I think it's very impressive work at this remove.
Posted by Rich Horton at 5:23 PM